Big job losses coming at some of the world's biggest global media organisations. Plus other media tidbits of the day.

The Germans are coming. Fairfax Media is about to get a new partner in its joint venture, Business Insider Australia, with the news that huge German media group Axel Springer (an underbidder for the Financial Times) is on the verge of taking control of the parent company for Business Insider in a deal valued at half a billion US dollars. Springer already owns 7% of Business Insider, picked up in a financing round at the start of the year. Business Insider was founded by former Wall Street analyst Henry Blodget. Blodget is a former Merrill Lynch analysts who fell foul of the authorities in the wash-up of the tech and net wreck more than a decade ago. — Glenn Dyer

No one is safe. While dozens of jobs go at print media around the world every day, big global broadcasters have largely missed the swinging blades of the bean-counters. No longer. Reports out overnight say that hundreds of jobs are going at ESPN, the huge US cable sports network controlled by the Walt Disney, and at the newest global media group, Al Jazeera.

Of the two, the cuts at ESPN are sort of known — Disney let it be known in July that cuts were coming when it revealed a sharp fall in subscriber numbers (more than 3.2 million) for the cable sports giant over the past year. Disney indicated it was looking to cut close to US$400 million from ESPN’s costs over the next three years, starting this year. Overnight those plans were revealed in internal memos, according to US business websites such as Marketwatch. On top of the sagging subscriber numbers (ESPN is the most expensive US cable channel), ESPN will have to pay hundreds of millions of dollars more in sports rights costs under a series of new contracts for major US sports, such as NFL football, baseball and basketball. So 200 to 300 jobs are going in the next few months.

And reports emerged from Al Jazeera that an internal email had already been prepared for sending out in the next day or so, detailing the losses. The Qatari-owned broadcaster is looking for big cost savings in the face of falling oil and gas prices and a possible radical change in investment strategy. An estimated 800 to 1000 staff go — almost one quarter of the total workforce — and its speculated that the newish emir of gas-rich Qatar wants to reduce the state’s commitment to the news media group that was supported by his father. — Glenn Dyer

Front page of the day. The Daily Telegraph is being sued for defamation by Hamza Cheiko over four articles published in 2012 after Cheiko participated in the Hyde Park protests against anti-Muslim film Innocence of Muslims. The Daily Tele‘s report on the court proceedings is splashed on the front page … 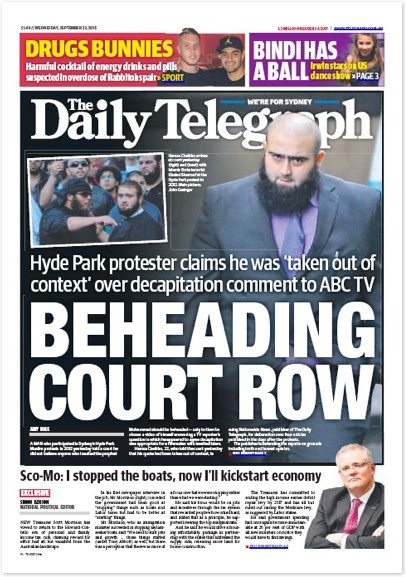 It’ll be interesting to see if the cuts at Al Jazerra also extend to their sports channels, originally called Al Jazeera Sports but now operating under the more generic moniker of beIN Sports.

Subscribers to the Australian version of this channel, which has scooped up the local TV rights to every major soccer competition on the planet except for the EPL, are almost apoplectic with rage at the lousy picture quality and the Kafkaesque and seemingly random scheduling of matches on the channel.

Because it has the rights to so many games, it can only show a tiny percentage of each league live, so it tries to supplement this with a disastrous web-streaming service that seems to be uploaded via a 14.4kb dial-up modem.

Reading the subscribers comments on their facebook page shows just how much their own customers hate them.