Isentia Index: The people have changed, but will the policies?

The cabinet re-shuffle has landed plenty of new names in the index for the first time.

Lots of newcomers to our top 20 this week after new Prime Minister Malcolm Turnbull — who ascended to first place after last week’s #libspill — announced his first Ministry last Sunday. New Treasurer Scott Morrison is in third place this week, with former PM Tony Abbott (quickly abandoning his promise to avoid “sniping”) denying Morrison warned him about the spill as he emerged from the surf at Manly. Former Treasurer Joe Hockey is up one place into fifth following news he will resign from Parliament and rumoured appointment as Australia’s ambassador to Washington, while Foreign Minister Julie Bishop has been joined by four other women promoted to Cabinet, including newcomers to our top 20, Defence Minister Marise Payne, Minister for Employment and Women Michaelia Cash and Assistant Treasurer Kelly O’Dwyer, with social media seemingly most interested in O’Dwyer’s baby daughter Olivia delighting everyone with her presence at the photo shoots.

Turnbull was on the whole congratulated for his diverse Ministry, but as some commenters mentioned, although former Defence Minister Kevin Andrews clearly wasn’t a fan, pre-empting the announcement by an hour to complain about his own sacking, noting  that we’ve had more defence ministers than PMs in the past five years.

Payne enters our index in seventh place, asking Australia to not judge her performance based on gender. Canning by-election winner Andrew Hastie is up three places after a seven per cent swing that saw both sides claiming a successful campaign last Saturday, and former Education Minister Christopher Pyne has been assigned to the portfolio of Innovation, Industry and Science (science! It’s back!) with no doubt high hopes he can fix the lot. Because he’s a fixer, lest we forget.

Education Minister Simon Birmingham and Communications Minister Mitch Fifield are both newcomers to the index this week following Sunday’s announcement. 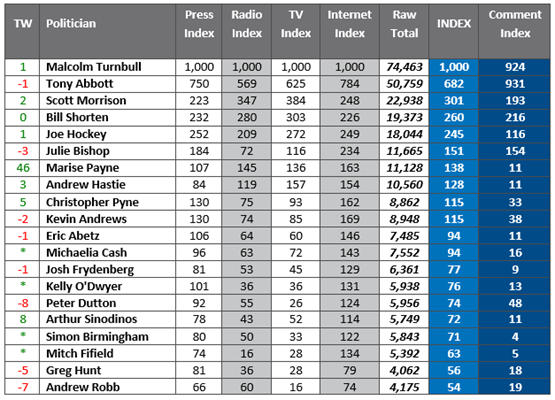 Social was more interested in discussing Abbott than Turnbull, with 20,000 more mentions, and there are rumours Turnbull has disappeared from his social accounts.

In contrast, talkback was slightly more interested in Turnbull, with my favourite this week from caller Mark on 3AW: “Malcolm Turnbull is not good looking”. Come now, Mark, you don’t have to lie.

I could have gone with the Emmys, but please, Leigh’s social sass was on point in response to criticism she was too soft on the new PM. Haters gonna’ hate.