Does Mitch Fifield still want to privatise the ABC?

What does the new Communications Minister mean for Australia's public broadcasters? 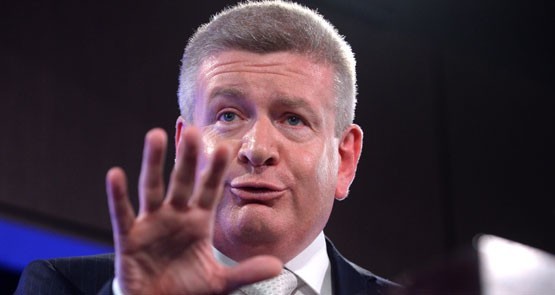 In his first public interview since assuming the Communications portfolio, Mitch Fifield tried to patch up the government’s relationship with the ABC.

Asked by Radio National’s Patricia Karvelas about a speech he’d given in 2008 when he said there was “merit” in proposals to privatise the ABC, Fifield dismissed it, saying he had been a “frisky backbencher” when he gave the speech. Asked about whether he intended to continue the culture of blaming the media for political difficulties (as Abbott had frequently done, saying the ABC wasn’t on “Team Australia” and accusing it and Fairfax of an anti-government “jihad”), Fifield brought up former Liberal PM John Howard’s reluctance to get into such disputes. “I don’t recall him [Howard] ever being critical of the media,” he said. “Sometimes you love them, sometimes you don’t … but that’s showbiz.” Asked about ABC budget cuts, he said he intended to see the ABC resourced to do what it must. But on the other hand, “any Commonwealth-funded agency should look to be the best possible steward of government funds it can be. I’m yet to meet an agency that has met administrative nirvana.”

In style and manner, Fifield sounded like his predecessor and now boss, Malcolm Turnbull. But while Turnbull was largely regarded as one of the ABC’s greatest supporters within the Abbott government, many aspects of his tenure as communications minister were controversial.

In his dealings with both the ABC and SBS, Turnbull showed an unprecedented willingness to confidently intervene in editorial matters. When Q&A came under fire over the Zaky Mallah affair, Turnbull had the Communications Department conduct a review into the broadcaster’s security arrangements and into the editorial processes that allowed Mallah to appear on the show. The department’s final document didn’t pass judgement on the desirability of the ABC’s editorial conduct, but it did set a precedent for the Department of Communications directly inquiring into editorial decisions taken by the broadcaster. When SBS Scott McIntyre tweeted controversial statements about Gallipoli on Anzac Day, Turnbull dobbed him in to SBS managing director Michael Ebeid. Fifield’s particular approach to such matters will be interesting to watch.

Turnbull was also the minister who oversaw significant cuts to the budgets of both public broadcasters. In SBS’ case, the $28.5 million yearly cut was meant to be recouped through allowing the network to average out its advertising over the day, which would allow it to air more ads in prime time. But the SBS ad averaging bill failed to pass the Senate.

Crikey understands SBS has decided to absorb the budgetary impacts of the funding cut, which will mean fewer commissions and the like rather than a large redundancy round, as was the case at the ABC. But given the cut was tied to greater advertising flexibility when announced, the network is likely to argue for the funding to be restored during the next triennial funding round, the outcome of which for both SBS and the ABC will be announced during the next federal budget. Negotiations have already started for the next funding round — the new minister will have a large role in this.

He’ll also play a part in appointing the next managing director of the ABC, along with two new board directors. Between this and the funding round, Fifield will oversee a series of decisions in the next 12 months that could reshape the public broadcasters. There’s a lot riding on the former “feisty backbencher”.

Up to 500 jobs to go as ABC, SBS funding cuts are finalised

Turnbull is a control freak – it remains to be seen if Fifield is as big a one?

From the tenor of Turnbulls first appearance on 730 the other night you would have thought that he had given back the funding cuts… no need to threaten privatisation when your treated with the sycophancy displayed by Sales who had obviously taken Abbotts advice and started to look for the good..

Sales has always been a Mal-content.