The hard right of the Liberal Party is focusing its anger on Scott Morrison, while it splits over Malcolm Turnbull. Which is all good news for the new Prime Minister. 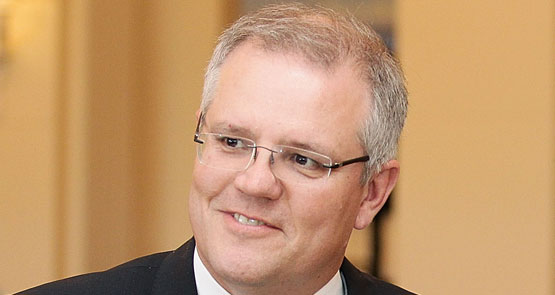 The continuing fallout from the deposition of Tony Abbott is, so far, playing out perfectly for Malcolm Turnbull. Rather than talking about the ousting not merely of Abbott but religious fundamentalists like Eric Abetz and Kevin Andrews from cabinet, the focus is on how the right is tearing itself apart.

Most significantly, Scott Morrison (who began his treasurership using Joe Hockey’s old notes featuring an unspecified, uncosted promise to cut taxes) is now being targeted not merely by Abbott loyalists but Tony Abbott himself, with his first comments after his sour departing media conference (“no wrecking, no undermining, and no sniping”) being to snipe at Morrison. Abbott effectively called him a liar, thereby signalling that the campaign against Morrison, started by far-right radio entertainer Ray Hadley, now has the imprimatur of the deposed king himself.

Morrison, until the ousting, was the darling of the right, the reversionary figure at the Abbott court (early modern courts always had a clutch of nobles who clung to the heir to the throne, in the hope of gain upon the death of the reigning monarch), the man being groomed to prevent the reviled Turnbull from supplanting Abbott. Now he’s enemy No. 1 for his former right-wing boosters, who missed that Morrison, from the moment he claimed the seat of Cook (the successful preselectee, Michael Towke, had been the subject of a smear campaign) in 2007, has only ever been about one thing: himself. Abbott’s attack gives the green light to further attacks, leaking and destabilisation of the new Treasurer. He has, after all, in the words of a former Prime Minister, “badly misled the public”.

There are other battles to be fought, however. Andrew Bolt’s simmering hostilities with The Australian have erupted into a civil war within News Corp, with Bolt, in the manner of a child lamenting that his brother hits him when their parents aren’t looking, complaining that Chris Mitchell is conducting a campaign against him but kept it out of sight while Murdoch was in the country. Bolt also repeated a longstanding, and entirely correct, lament from a number of News Corp tabloid employees of all persuasions — that they subsidise the tens of millions of dollars The Australian loses each year.

Mitchell’s response was to poke Bolt by claiming that his readership is younger and more educated than Bolt’s. It’s true that Bolt and the Oz target different segments of the market — the Oz has to give the appearance that it is written by individuals capable of rational thought, whereas Bolt’s readership is composed of people perennially in danger of shorting out their keyboards with spittle. But at their core it’s the same readership — old, white, reactionary, male denialists who bitterly resent that the world they grew up in, where people like them ruled unchallenged, no longer exists.

The key difference between the Oz and Bolt, his tabloid far-right colleagues and the shock jocks is the difference between the crony capitalist and culture warrior segments of the right. There’s significant crossover between the two, of course, and the Oz loves a good culture war, but it understands there are wider issues than a remorseless war unto the death with the left; in particular, the interests of business, which must be supported at all costs via a constant campaign for lower corporate tax, fewer rights for workers and unions and deregulation — though mainly for favoured industries like the mining sector and the banks. The replacement of Abbott with Turnbull, from this point of view, augurs well for the agenda of business, since Abbott had simply ground to a halt on any economic reform of note.

From the point of view of culture warriors, however, the replacement of Abbott with Turnbull is a disaster: not merely has the battle been lost, but the fortress has been overrun and the enemy has installed its own ruler. From here, there is only resistance or collaboration — thus the treatment of Morrison, at best a collaborator, but perhaps the one who let the drawbridge down to the invaders, and even Bronwyn Bishop, said to have backed Turnbull as payback for Tony Abbott not supporting her all the way to political suicide.

Meanwhile, Turnbull remains above it all, the target of remarkably little invective, except from Cory Bernardi — transmitting as always from some remote location almost entirely devoid of normal people; Bernardi, of course, will never forget that Turnbull sacked him when he was leader, although he ended up suffering that fate under Abbott as well (Bernardi used to boast how he brought down Turnbull in 2009, as well). But for the moment, Turnbull hasn’t merely put his enemies to flight, he’s got them fighting amongst themselves.

I memory serves … wasn’t Morrison the darling of small-l libs in NSW before selling his soul seeing the rightness of Tony Abbott’s ways and becoming the darling of the far-right?

Is there a pattern here? soft centre when it suits, hard-arse when the wind blows the other way, back to the centre again.

All those who saw the photo of Abbott showing affection to Bronwyn Bishop after he “sacked” her would have seen the sourness on her face; and know that she wouldn’t forgive his treachery. It’s amazing to the vast majority, but these ideologues on the right never forgive a slight, even though Abbott had shown incredible and ultimately self-defeating loyalty towards her.

It is keeping a man-hole cover on Scrot’s persona?
It’s funny how this trait has only just developed?
If it was present earlier, you wonder how those that would have put up with it (when it would have served their purpose) could have been happy to do so – outraged as they are by it, now?
…. Then again, there were those that could see it long ago?

It is erroneous to claim that the first incarnation of Turnbull was a martyr to his climate change convictions or his “moderate views”.. it just happened to be a convenient trigger for his overthrow.. He had a multitude of issues engulfing him at the time including the Gretch fiasco and his own particularly abrasive relationships with his colleagues .. He also was polling poorly in comparison to Rudd..

You should see what’s going down in Warringah.
According to email provided to another media outlet, the President of the Warringah Liberals is basically saying they wanted Abbott to stay on for another few years or decades!