Tony Abbott nudes up (almost) ... is the government going to sell the ABC? ... Shaun Menegola jumping ship to Seven? ...

Return of the budgie smugglers. What do you do when you find yourself suddenly out of a job, especially one that imposed a whole lot of restrictions on what you could and couldn’t do? Head down to the beach for a surf, of course. Yesterday The Daily Telegraph papped former prime minister Tony Abbott as he caught some waves in Manly, did a few push-ups on the beach and showered. Yes, they took photos when he used the public shower — no one pays former PMs any respect these days. While Ms Tips was horrified at this full-length pic in today’s Tele, it did make us realise that it’s the first time Abbott has been seen in his budgie smugglers since he was opposition leader. He told the Tele: “Politics is a game of snakes and ladders, and I’ve had a few snakes, and I’ve had a few ladders”. Given the context of the photograph, however, we wish he had chosen a different metaphor. 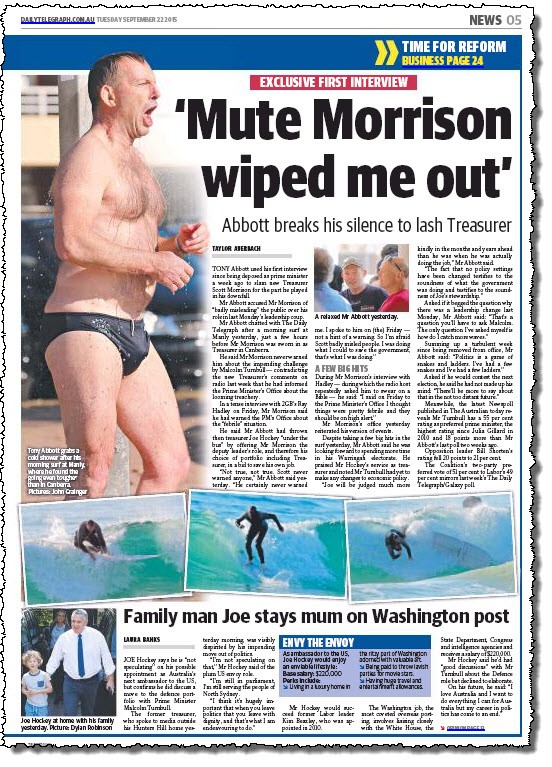 Second verse, same as the first? While many lefties across the country celebrated when Malcolm Turnbull rolled Tony Abbott last week, expecting a better deal for the ABC, the environment and asylum seekers, it’s more than likely they jumped the gun a bit. New Communications and Arts Minister Mitch Fifield may not be a friend to Peppa Pig, according to this speech given to the Adam Smith Club (yes, that’s a real thing) in 2008, in which he said:

“Conservatives have often floated the prospect of privatising the ABC and Australia Post. There is merit in such proposals. But the likely strong public opposition means that any government prepared to go down that path would need to prepare the ground and make the case for the change.”

We asked Fifield’s office if he still held those views and if he’d be making the case for change, and were told by a spokesperson: “The government has no plans to change the ownership of the ABC or Australia Post.”

And then they were Seven? There’s a persistent rumour going around that Channel Nine’s Perth news director Shaun Menegola is about to jump ship — and coast — to Channel Seven:

“Big word out of Perth is that Shaun Menegola the 9 News director is going to defect back to 7 to join Craig McPherson, who wants to parachute him into Melbourne to replace Simon Pristel … Apparently Howard Gretton, the 7 News Director in Perth was telling a few of the troops.”

Nine tells us that it’s just a rumour, but it’s also been reported at DeciderTV. Craig McPherson’s move to Seven from Nine was announced in July, into the role of director of news and current affairs across the country. He goes into the role “next to or above” Seven news director Rob Raschke, according to The Australian‘s Media Diary, whatever that means.

Fight club. A tipster tells us that the battle for the Liberal Women’s Council in NSW is heating up:

“The civil war in the Liberal party between the conservatives and moderates has turned its focus to a female battle at the grassroots. There are only two candidates for Women’s Council President and the vote is held next Wednesday. One candidate is Chantelle Fornari-Orsmond, a staffer with Member for Robertson, Lucy Wicks MP, and said to be hand-picked by Member for Mitchell, Alex Hawke MP … The second candidate is Teena McQueen, fighting on a platform of ‘giving a conservative voice for the women in party’. Despite her surname, the only queens Teena likes are royal ones, promoting herself as being both pro-monarchy and anti-gay marriage. The Teena camp are accusing Chantelle of simply ‘posing as a conservative’ (there’s a familiar theme). This battle is getting ugly with furious lobbying … The campaign is being fought to the death because the stakes are so low.”

It’s not the first time the battle for the presidency of the Women’s Council have taken a turn, in 2011 Teena McQueen said she was told by a senior Liberal that she couldn’t be president as she was “unmarried” and “dressed inappropriately”. Know more? Drop us a line.

Library resources battle. Yesterday we reported that Australian National University had frozen purchases of books for the library, under cost pressures. An ANU spokesperson responded to us after yesterday’s deadline, saying that the freeze wasn’t on books, but “other purchases”:

“ANU libraries continue to buy new text books but have implemented a temporary freeze on the purchase of other new resources. The move is normal practise for the management of libraries, library resources and library budgets.

“ANU has already added almost 61,000 new books to its collection in 2015. ANU staff and students also have access to material in other library collections and at other university libraries, including many overseas institutions, through resource-sharing initiatives. At the same time, ANU regularly shares material from its collections through inter-library loans.

“ANU libraries are committed to ensuring staff and students have access to the best possible resources.”

We asked for clarification on what “other new resources” meant, as it could mean anything from furniture to staples or software. The spokesperson said modern libraries have lots of resources, including books and other material. Clear as mud.

The ANU’s in good company — whatever Abbott might advise investors

The budgie smugglers are more useful than the budget smuggler.

The rot set in when librarians began referring to books as ‘resources’.

Who do you believe?
Bishop? Morrison? Abbott, or a couple from his “Captain No’s Picked Cabinet” now in Turnbull’s?
Morton’s fork?