Elevating more women to cabinet positions does not actually improve the lot of women in Australia. 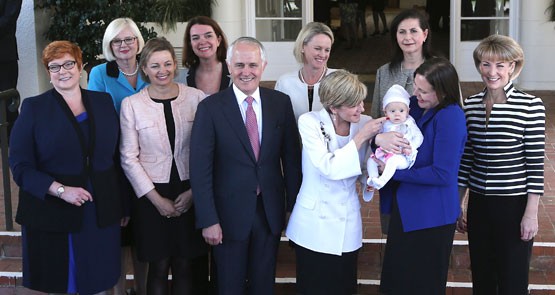 “The Liberal Party is a broad church,” said John Howard at a journal launch in 2005. The publication, The Conservative, was not to endure in print, but Howard’s description of his party did stick around. This characterisation, referenced often in recent days, is not a bad one for the Libs, who are a congregation united by a founding principle. The free market is the one god they agree to serve, and if service to that other God takes political precedence, your name might be Cory Bernardi, and it could be time to build a narrow church entirely from holy splinters to appease the Lord.

In recent years, “broad church” has been enthusiastically adopted by some feminists who believe that all feminists are as united by a single idea as the Libs. Slogans such as the very popular “feminism is the radical proposition that women are human beings” apply intellectual cohesion where there can, and should, be none. Feminism, unlike economic liberalism, is not a broad church, and to seek to baptise all at some shaky humanistic font is an ignorant act of bliss. There are some writers who propose that ending the “stigma” attached to being wealthy enough to hire a full-time nanny is a legitimately feminist goal, and then there are those of us who would prefer to end the “stigma” of a movement overcrowded with dumb ideas. One of these being that female representation in government is, by necessity, a marvellous thing.

To think of “women’s issues” as bipartisan makes about as much sense to me as thinking of Michaelia Cash, the newly appointed Minister for Women, as someone I might like to invite to tea. Still, Turnbull’s “21st-century cabinet”, which features precisely three more new shiny lady baubles than Abbott’s antique, is seen broadly, in the falsely broad church of feminism, as progress.

The idea that “a rising tide lifts all boats” is something the Liberal Party is entitled to believe. This truly broad church is founded on the idea that privilege trickles down from the top. Feminism, however, has a much richer intellectual history, and it is one that is at real risk of final burial if we continue to believe that 51% of the population is just too lofty for the dirty business of party politics.

Recent debate on domestic violence — certainly, a policy concern that needs urgent address — powerfully diminishes the authority of a partisan feminism. The views that (a) all women confront equal threat of family violence and (b) sexism is a “spectrum” that starts with wolf-whistling and ends in brutal murder are now broadly accepted. In a tremendous and surprising mea cupla for The Saturday Paper, former speechwriter Martin McKenzie-Murray sought to trace the origin in particular of this latter view. Of course, Mark Latham tried to undo the former with far less skill and much more attention. The guy is a dill, but his assertion that poverty is a risk factor for family violence is not without basis.

This is not to say that all that Cash has achieved in her role, previously as the minister assisting the prime minister for women, is useless on the matter of family violence. Her role in establishing a national domestic violence order is to be commended, and if her presence in cabinet expedites this, all the better. It is to say, however, that family violence is, like many “women’s” issues, something with a partial origin and solution outside of the “radical proposition that women are human beings”. It’s not enough to “end sexism” both through the appointment of women to cabinet and the changes they may make to legal frameworks. You have to also, for example, fund safe-houses.

And you have to ensure that not all “women’s” issues are conflated with violence. Despite the view that “it’s all connected”, McKenzie-Murray and other thinkers unafraid to re-politicise feminism have shown us that it’s not. Women, like men, are subjects produced by a range of complexes, and they cannot be legislated for only in terms of one policy issue, nor can they be socially redeemed by representation in cabinet.

To state the inelegantly obvious, the gender of a leader is no sort of policy guarantee. Nor, for that matter, is race. Political and business history gives us plenty of examples of women who did not act in womanly interest (Marrissa Mayer, Margaret Thatcher, Julia Gillard), and logic tells us that the individual move from one’s social class into a political class is irreversible. Even Carmen Lawrence, a patron saint for progressivism and of Emily’s List, must also be remembered as the politician who introduced mandatory sentencing, even against the findings of the Royal Commission into Aboriginal Deaths in Custody.

But to say these things about a lack of progress at a time where so many Australians are absolutely sure of its personification by Turnbull and his ladies is a downer. Believe that the removal of Abbott is consonant with the end of sexism or its hyperbolic cousin “misogyny” and that a shift in personnel, if not economic, policy is a “radical proposition”, until that day when you cannot believe it any longer.

Yes, I agree, but could we ever get a true p<.05 result that success or failure in a specific portfolio is due to a particular gender? Certainly not with the current male/female figures at least… 🙂

@klewso I almost find myself liking Bishop for what appears to be her barely concealed distaste for infants.

hold the baby I need to express myself..

“The views that (a) all women confront equal threat of family violence and (b) sexism is a “spectrum” that starts with wolf-whistling and ends in brutal murder are now broadly accepted.”

Not by me. It’s wholly untrue, even if broadly accepted, but I think you meant it to be read that way. Didn’t you?

A sad meditation Helen, if you don’t mind me calling the piece a meditation. But I would understand if you found the term offensive. Not sure I like it myself, but it left me melancholic.