Media briefs: Bolt v Mitchell (round 3) … the world according to Sheridan … who squealed? …

Andrew Bolt's not happy (again) with his conservative stablemates at the Oz. And other media tidbits of the day.

Malcolm brings the ratings. The ABC’s heavy political night last night certainly drew the viewers. The ratings weren’t as high as they had been last week when the deed was done, but they were very solid numbers nonetheless, showing once again an appetite for long-form political journalism after the dust has settled.

In terms of ranking, Australian Story did best with its reworking of the 2009 story on Malcolm Turnbull. It had 1.492 million people across the country, including 1.051 million in the metros and 441,000 in the regions. That made it the second-most watched program across the country last night after the The X Factor. Four Corners attempt to explain the replacement of Abbott with Malcolm Turnbull managed 1.391 million national viewers — 994,000 in the metros and 397,000 regionally.

Bolt v Mitchell (round 3). Does Turnbull’s ascension mark the end of Liberal conservatism? News Corp’s papers have taken rather different lines on the issue. Andrew Bolt, one of Abbott’s fiercest loyalists, on Friday urged The Australian to cease it’s calls for Liberal party unity, arguing that it “should be slower to now insist others fall in dutifully and loyally behind Turnbull”.

Meanwhile, Monday’s Oz brought news from News Corp Australia chief Julian Clarke, who called on the nation to fall in line behind the new PM. The piece featured a line from Australian editor-in-chief Chris Mitchell, who mused on why his newspaper had taken such a different line to the one Bolt would prefer.

“Bolt’s audience includes many conservative retirees whereas The Australian’s readership is younger, rich, better educated and working in legal, political or the business community … These people don’t read the Tele or Bolt.”

Bolt, a very careful reader of the Oz, wasn’t going to take this lying down. On his regular 2GB show with Steve Price last night, the columnist railed against the editor. He said by sheer virtue of the size of his audience, more educated people in the educated communities to which Mitchell referred probably read him than the heavily subsidised paper.

It’s far from the first time Bolt has launched a personal attack at Chris Mitchell (though he says he’s only responding to provocation). He butted heads with the paper over associate editor John Lyons’ reporting in the past, as well as over its coverage of the indigenous recognition referendum. The dispute was settled, Bolt suggested on his blog earlier this year, by Rupert Murdoch’s arrival.

He took up the theme again last night.

“Put it this way, Steven. Chris Mitchell has had a number of strange outbursts of personal vendettas against me. He called it off a couple of days before Rupert Murdoch came to town. Now that Rupert Murdoch is away in America, it seems to be on again. This is unprofessional behaviour — it really is. People in News Corp must have a look at whether this is worth doing.”

The station then took calls from listeners to ask them whether or not they were really retired old conservatives. — Myriam Robin

Sheridan’s screed. Who now dares say that The Australian does not break new ground in journalism? Today’s front page “Exclusive” by Greg Sheridan (“Abbott faces his future, with a little help from friends”) sets a benchmark no other media outlet can hope to match.

Sheridan’s 1200-word piece (spill to page 6), contains not a single new fact, and not a single quote — sourced or unsourced. It is sheer word-processor doodling — journalistic junk dressed up to look like inside knowledge and analysis.

The purported sense of Sheridan’s wall of words is that opinion is divided among the friends and political associates of our recently departed PM as to whether Abbott should stay on in Parliament. Gosh, what a scoop! Various positions are ascribed to: “some party elders”, “others committed to a more broadly conservative view”, “those advising Abbott”, “those suggesting to Abbott”, “those arguing to Abbott”, “the voices urging Abbott” and, when all else fails, “some might argue”.

Yet not once could Sheridan put a name or quote to the propositions that followed. Nevertheless, for the editors of The Australian, this constitutes an “exclusive”.

The unpleasant truth is that the whole piece is a thinly disguised spruik by Sheridan urging his old university friend Abbott to remain in politics. The dumped Liberal leader is described as: “a giant of conservative politics”, “the most important figure in conservative Australia”, “instinctively attracted to good works … things which somehow have never got the public recognition they deserve”, with a “naturally ebullient, engaging and quintessentially Australian personality” who will “in time have a place in the pantheon of Liberal heroes”.

Had enough? No, Greg’s not finished with larding on the praise. His uninterrupted bursts of sunshine even fall upon Abbott’s wife, Margie, described as “the very embodiment of poise and decency in public life”.

But despite all this shameless ballyhoo, Sheridan is too bashful to say directly what he clearly thinks himself. Instead, he puts his opinions in the mouths of (nameless) others. Thus, “those arguing to Abbott that he would be best advised to stay also have his best interests at heart” and “they also think Abbott’s continued presence in parliament would in the long run be a mighty benefit to the Liberal Party itself”.

And just in case you might doubt the soundness of those views, Greg assures us they come from “every sensible person on the centre-right, including those who are urging Abbott to stay in politics”, and that “the voices urging Abbott to stay around are important voices, close to him, with much merit in their arguments.” I wonder who he had in mind? — David Salter

Front page of the day. It hasn’t been a great week for David Cameron, but we are mostly choosing this for all of the pig puns … 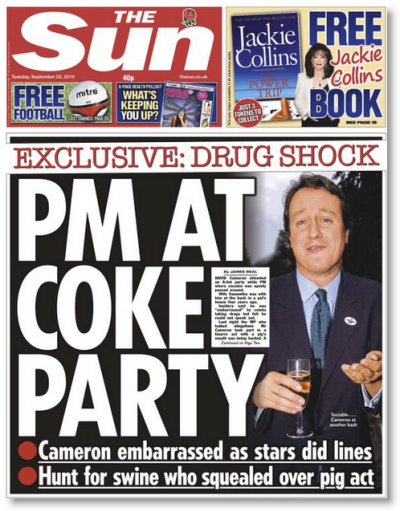 How many are interested in the endless bickering between Blot and anyone who upsets him? Sadly, this rubbish is actually going to air on radio and soon to be (if not already) heard nightly on Melbourne radio – as if standards in commercial radio couldn’t fall any further.

Well, technically Sheridan’s musings *are* an exclusive (and this comment is too, if you want to spruik it!)

Finally, the conservative media turn on each other with an enjoyable rabidity… pass the popcorn!

I am so glad that I discovered podcasting – it gives the evil essence of Blot et al without the padding.
Rather like the black, seething mass at the end of Time Bandits.

Who else would print Sheridan?