Malcolm Turnbull’s elevation to the prime ministership has delivered an immediate boost to the Coalition’s vote in today’s Essential Report, and the new Prime Minister has a massive lead as preferred prime minister over Labor’s Bill Shorten.

The Coalition’s primary vote since Turnbull became leader last Monday (that is, a one-week sample rather than Essential’s usual rolling two-week average) has lifted to 43%, with Labor on 37% and the Greens on 11%, for a two-party preferred result of 50%-50%. That compares to 52%-48% (a two-week rolling average) in Labor’s favour last week. Turnbull also leads Shorten as preferred prime minister 53%-17%; Shorten’s lead among Labor voters are preferred PM is just 3 points — he leads Turnbull 38%-35% among Labor voters. Turnbull leads Shorten among Greens voters by a massive 41%-23%. 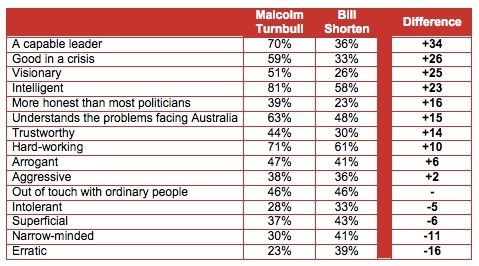 Only on “out of touch”, “arrogant” and “aggressive” is Turnbull rated as inferior to or equal to Shorten, otherwise he holds mostly enormous leads in areas like “capable:, “good in a crisis”, “visionary”, “honest”, while Shorten, who surpassed Tony Abbott on virtually every characteristic, only wins on “narrow-minded”, “superficial” and other negatives.

What’s also notable about Turnbull’s support is that Liberal voters, who previously preferred Tony Abbott as Liberal leader, have immediately locked in behind him. Of all voters, 37% rate Turnbull the best leader of the Liberal Party, with “don’t know” a distant second (21%) and Julie Bishop next (14%) — new Treasurer Scott Morrison is on 4%. Just 9% of voters think Tony Abbott is the best leader. And while Abbott rates more highly with Liberal voters (14%), so does Turnbull: 47% of Liberal voters rank Turnbull first. Julie Bishop performs most strongly among Labor voters (19%) then Greens (18%) compared to 10% of Liberal voters. Interesting, too, that Turnbull does much better among men than women — just like Tony Abbott did. He scores 44% among men compared to 30% of women, with women more strongly preferring Julie Bishop compared to men (17% to 11%).

Finally, support for a plebiscite on same-sex marriage may turn out to be Tony Abbott’s one popular legacy: support remains strong for voters having a say rather than Parliament deciding the issue, 67%-21%:

Bernard – I can’t begin to understand your ‘Turnbull is wonderful’ analysis.
The polling says that overall, 53% prefer him as PM, but only 50% would vote for the Coalition (and 50% Labor), 2PP.
Isn’t that hung parliament territory? And we are supposed to be in the ‘sugar hit’ period.
So would you like to explain, taking into account the MOE, just what is so fantastic about these figures?
Wishing won’t make it happen – certainly not on this poll result!

Why would Australians want a plebiscite on marriage equality? It’ll cost us a fortune and tell us what we already know, without binding the parliament to do anything. A colossal waste of money.

Has anyone explained to the people that the marriage law can be changed easily after a parliamentary vote, as long as the libs allow a conscience vote?

The stupidity and ignorance of Australians never ceases to amaze me.

I could never understand why Labor didn’t have a Plan A?

There is the Abbott buyers remorse factor to consider.. the fact that the Turnbull coup has rid the electorate of an almost universally disliked politician in what has been almost a recall election is sure to be reflected in a honeymoon period..Hockey departing is a bonus…the fairy dust will surely settle..

From what I have seen this week, Turnbull does more talking than listening. Has an answer to everything. But, he is clearly more capable than poor old Bill.