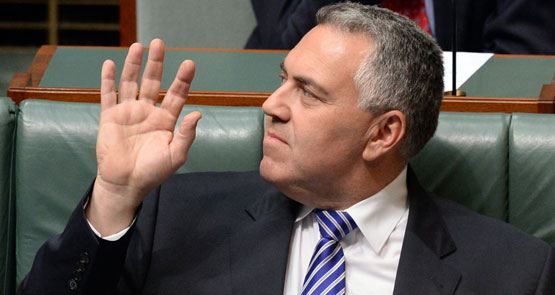 The budget outcome for 2014-15 enables us to draw a line under Joe Hockey’s treasurership.

Hockey was big on drawing lines. Unveiling the 2013-14 Mid-Year Economic and Fiscal Outlook in December 2013, he declared he wanted “to draw a line in the sand on the numbers that we have inherited”. Then a year ago, revealing the 2013-14 budget outcome, he declared that “this draws a line under the sand of the last year of Labor delivering a budget”.

Now the line has been drawn under him, and his political career. He’s off to Washington DC. Foreign Affairs Minister Julie Bishop’s trips there should be interesting, given the events of the last week. And Scott Morrison’s.

The blowout was down to lower-than-forecast revenues, as it was in former Labor treasurer Wayne Swan’s time. The problem is, this government insisted that would no longer happen. Finance Minister Mathias Cormann said this about the 2013 MYEFO:

“It is a matter of record that the previous government invariably overestimated revenue and underestimated expenditure. They kept promising surplus budgets and kept delivering more deficits. Our core commitment with this budget update is to draw a line in the sand as the Treasurer said and to provide a believable set of figures.”

The outcome also gives us the opportunity to place Hockey’s brief tenure in historical context. Under Labor (including 2013-14, when Hockey loaded an extra $8 billion onto the books for the Reserve Bank), payments averaged around 25.1% of GDP — that includes the big stimulus year of 2009. In 2014-15, payments were 25.6% of GDP. That is, Hockey spent more on average than Labor did. And tax? Hockey collected 23.5% of GDP in receipts, compared to an average of 22.5% under Labor. Hockey taxed us at a whole percentage point more than Labor.

So much for the party of lower taxes and smaller government. Hockey was a big spender and, compared to Labor, a big taxer.

Now the talk is Turnbull and new Treasurer Scott Morrison are bringing forward MYEFO to next month in a sort of mini budget (a good idea we’ve already suggested) to help educate us on the country’s financial position. That’s fine, but let’s recall the words of Reserve Bank governor Glenn Stevens before the House of Representatives Economic Committee last Friday:

“For Australia, we cannot, of course, determine our terms of trade or other forces in the global economy. We can only adjust to them. The record of adjustment in recent years is good. We negotiated the financial crisis without a major financial crisis of our own or a big downturn in economic activity. We negotiated the first two phases of the resources boom without major inflationary problems, and are part way through our adjustment to the third phase — so far without a major slump in overall economic activity. There is still a pretty good chance that we will come out of this episode fairly well, and much better than we came out of previous episodes of this type.”

So the message is no need to panic: slow and steady will win us the race. In other words, no more lines in the sand, budget emergencies or comparisons to Greece. The lessons of Hockey’s tenure are clear — bring voters along with you, treat them with respect, provide reassurance to business and consumers, and remember the budget is an economic and political tool, not an end in itself.

There is some research which indicates a link between the gut and brain function..its been all downhill for Hockey since he had the stomach stapled.. the poor not driving and lifters and leaners were complete brain fades..

If Joe becomes ambassador, it will show Malcolm is just another snout in the trough Tory leaner who supports his own.

“Silence is Golden” – NY is probably how much Joe’s is worth?

But but aren’t we living on the bankcard, you can’t run a household like this?
I think Hockey’s biggest blue was after all the propaganda about debt and deficit disaster he the went to NZ and said that all was well in Australia.Those bloody kiwis cause us nothing but trouble and not just on the rugby field.