The most secretive of Australia’s billionaires has been unmasked, with The Australian Financial Review this morning publishing a picture on its front page of TPG founder David Teoh, who has for years carefully guarded his privacy, such that the media had no clear photograph of him.

Teoh has for years been a subject of fascination to Australia’s rich-watchers. In October 2013, he (well, his back) graced the front cover of BRW, as the magazine struggled, largely in vain, to speak to those who knew or had seen him. Teoh, who along with wife Vicky was this year’s 13th richest person according to the BRW Rich List with a fortune of $2.31 billion, has come into the limelight of late. His company, TPG, purchased iiNet, previously one of Australia’s most media-friendly and open telcos, leaving many within and without the company fearful of the culture clash. So mysterious is the CEO that at a recent industry event, then-communications minister Malcolm Turnbull joked about the camera-shy Teoh by displaying a “wedding photo” for iiNet and TPG with a picture of iiNet CEO David Buckingham and a man with a question mark on his face. “And all I can say is we are absolutely in favour of the ACCC having a conscience vote on the issue,” he joked. 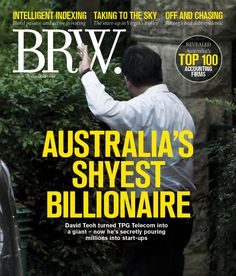 While Fairfax reporters have in the past interviewed Teoh, they’ve never successfully taken a photo. During previous attempts Teoh has covered his face with his hands or turned away from the camera. In its October 2013 feature, former BRW reporter Ben Hurley wrote that Teoh had accidentally clipped photographer Nic Walker with his car in his attempts to avoid a picture. Teoh stopped and helped Walker, and explained to him that he wants people to respect his privacy, on the condition that Walker didn’t raise his camera.

But last month, freelance news photographer Daniel Munoz was commissioned by Fairfax to try, once again, to get a photo. He succeeded where many have failed.

It took three non-consecutive days of waiting outside Teoh’s house, Munoz told Crikey. He was careful to avoid being seen to stake out the premises — hence why he didn’t just turn up every day.

“He was very evasive. One day, I was there and [Teoh]  happened to walk out and I was ready — he was just leaving home. I took a couple of quick shots.”

Asked how he knew it was Teoh he’d photographed, Munoz says he didn’t. “All I knew was that I’d photographed a guy leaving Teoh’s house.

“But we confirmed it with photographs we’d gotten before. There was one where he covered his face with his hand … we compared with that and realised it was probably him. Then we spoke to people who’d seen him, who confirmed it was him.”

Teoh is a controversial figure in the telecommunications industry, particularly for the low-cost, no-frills service for which TPG became famous. Before TPG’s takeover of iiNet was approved, TPG went to great lengths to explain it would keep iiNet as the company customers love, particularly its well-regarded customer service. But since the takeover was finalised, TPG has already begun making waves in iiNet. CEO David Buckingham departed almost immediately, and it is expected many more executives will be going in the weeks and months ahead.

Rumours within iiNet also suggest that when Teoh turned up to iiNet’s Perth offices, where much of its network operations and call centre work takes place, he was taken aback by the pool tables and massage services in the office and wanted them removed. It was only after executives in iiNet suggested staff morale was how the company retained its high “net promoter score” — the measure used to gauge customer satisfaction — that Teoh backed down.

The incident was strongly denied by TPG chief operating officer Craig Levy, who told Crikey he was on the trip with Teoh and didn’t recall the incident taking place.

Levy says TPG is keen to get value out of the iiNet deal in retaining the customer loyalty iiNet has achieved. He says that although it has only been four weeks, TPG has already decided to retain the iiNet call centre’s current operations in its current arrangement out of Sydney, Melbourne, Adelaide, Perth, South Africa and New Zealand. He says TPG is already working to improve iiNet by simplifying the company’s naked DSL broadband plans.

TPG today reported a 31% increase in annual profit for the financial year ending July 31, 2015, to $224.1 million. This result does not include iiNet, because the takeover was not finalised until September 7. TPG says much of the company’s improved results are on the back of its other acquisition, AAPT, and adding 73,000 broadband customers in the year.

Tips and rumours: No photos!

What bothers me about the TPG acquisition – only partly because I’m a satisfied iiNet customer – is that the company’s growth pattern and the glowing coverage in the tech and business press is disturbing reminiscent of that around OneTel and similar enterprises. From some perspectives there appears to be the same arc of acquisitions, growth, profits and boosterism, followed by …

Does Crikey actually BELIEVE that the man’s photograph is so important? He’s been known to be rich, he’s been known to control companies. That he hasn’t chased after media Hedda Hopper type fame the way so many ‘celebrities’ have is surely not a black mark against him, even if Capitalist media entities such as Crikey need it to boost their businesses.

Really, paparazzi tactics to publish a picture of a CEO who is not doing anything illegal and does not want their picture published.

Is the publication of his picture really considered to be in the public interest by the journalist fraternity?

Will he now be kidnapped? The other rich bastards have been telling us that this is a huge risk.Just shows what bollocks that whole campaign by the leaners was.

Kevin_T, sadly this is the sort of diversionary pap which helps the Capitalist Media financially, so they’re content to run with intellectually irrelevant as long as it helps their bottom lines.