Tony’s Last Supper: one last hurrah with the Old Boys

Hours after leaving Kirribilli House with his wife, Abbott reappeared in the prime ministerial residence for one last dinner with Riverview classmates. 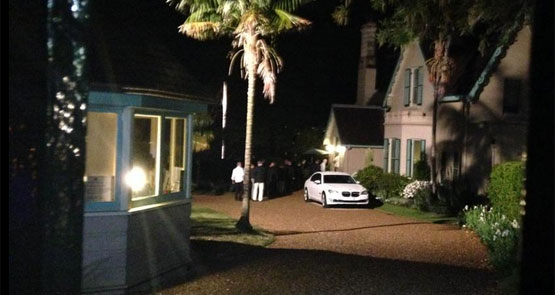 What a difference four days make. When the invitations to the 40-year school reunion for the Riverview class of 1975 went out two months ago, the Old Boys’ eyebrows shot up. Instead of being held at the school, as is normally the case, this glittering occasion was to be take place at Kirribilli House, home of the year’s most famous alumnus, prime minister Tony Abbott. What they weren’t to know, when they RSVPed and paid their money, was that, in fact, it was to be Tony’s Last Supper. For a man who had been so soundly rejected by his party and so shockingly decapitated by the cabinet, it was entirely appropriate that he spend his final hours at the prime ministerial residence in the bosom of his cultural fraternity, the Riverview Old Boys.

All afternoon there had been activity at Kirribilli House, the picture-perfect sandstone mansion on Sydney’s harbour. By 5.30pm, after several trips to the car, Tony’s low-key wife, Margie, packed the family schnoodle into the front seat of the car and jumped in the driver’s seat. At this point the former PM, wearing a navy-blue polo shirt and a pair of chinos, came to speak to the handful of journalists outside the gate. “This is the last time Margie and I leave Kirribilli House,” he said, looking a bit downcast. His car, with his trusty bike on the back and a kayak on the roof, was part of a three-car convoy that swept out, presumably back to the family home in Forestville.

At the North Sydney Hotel, however, excitement was building. From about 6pm, groups of Old Boys started to enter the pub, eager to start the festivities. Beers were drunk and stories exchanged. Who would have thought that this reunion would turn out to be such a bittersweet affair? By 6.55pm, the official car had swept back through the gates of Kirribilli House, disgorging a spruced-up Tony, in slacks and a sports jacket, through the front door.

There was a small media pack outside the Kirribilli House gate; soon after this, the rain started to pelt down and we ran for cover. I sheltered under a television network’s umbrella and repaid the favour by identifying the next middle-aged man to enter the gates as Macquarie Bank CEO Nicholas Moore. I’m not sure what he was doing there, as he was at school the year below Abbott. In a suit and tie, looking like he’d come straight from work, he seemed a bit out of place.

At 7.18pm a giant bus pulled up and about 80 middle-aged men jumped out. Casually dressed, many sporting the weekend casual abomination that is the leather bomber jacket, they walked quickly inside. “Must be a slow news day,” one of them quipped as he scurried inside.

They would have much to talk about. According to David Marr’s Quarterly Essay on Abbott, Political Animal, he was not the star of his year. “He was neither head boy nor dux. Despite his father’s protests, he never made the first XV or the first eight. He didn’t debate. His name was not on the honour boards nor was it everywhere in the school magazine. In his final year he won the Paul Meagher Prize for Modern History and his Eminence the Cardinal’s Prize for Religious Knowledge. It was not a shower of glory.”

One of Abbott’s school mentors, Father Emmet Costello, was responsible for the return to mass of Tom Hughes QC, John Gorton’s attorney-general, according to Marr. Hughes is the father of Malcolm Turnbull’s wife, Lucy, who is widely thought to be the catalyst for Malcolm’s conversion to Catholicism.

The Jesuits, the Catholic order that runs Riverview, has always had mixed feelings about its famous progeny.

In 2012, Father Ross Jones slammed Abbott in the school newsletter for saying he would tow illegal boats back into Indonesian waters.

“When challenged on talkback radio recently that this was un-Christian, Mr Abbott simply retorted that he didn’t think it was a very Christian thing for asylum seekers to come in by the back door and not the front door.”

Commenting on the concurrent parliamentary debate on refugee policy, Jones said that the arguments were ”mean-spirited … lamentable … and lacking in moral fibre”.

Anyway, the party was in full swing when I left at 8.15pm. Periodically, Abbott’s very loud kookaburra laugh rang out, no doubt at the memory of some outrageous school prank. Black-waistcoated waiters swarmed around, offering canapes and drinks.

While I waited for the bus to arrive, I’d been re-reading Marr’s essay, which has a quote from the Bible on its flyleaf:

“For what shall it profit a man, if he shall gain the whole world, and lose his own soul?” Mark 8.36 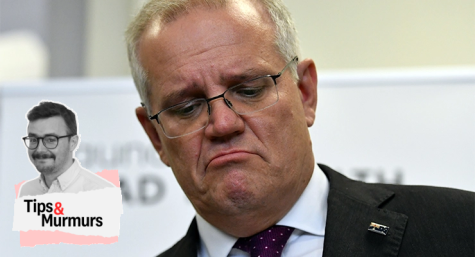 This shabby attempt at drollery is worse than juvenile junk; it is more like pubescent pap.

It probably shouldn’t surprise, that Abbott’s behavior on leaving the job was as graceless as his method of performing it. But it does.
Such a small man in such a big job. Good riddance.

Can’t agree with you Desmond – a very valid article for mine. He was “thoroughly decapitated” and utterly graceless in response.

Thanks paddy, I can’t build on that, well said.