All quiet on the Western front. With the parliamentary week over, our eyes turn West — back to the seat of Canning, the byelection that played a major role in Tony Abbott’s demise. The residents of Canning tell us the electorate has gone quiet compared to the frenzy of previous weeks:

“It’s gone a little quiet: last week we were being polled, robopolled or push-polled up to twice a day. This week, since Turnbull’s ascension, we have not been polled. I fear Canning has disappeared back into the mist, like Brigadoon.”

Since the ascension of Malcolm Turnbull to the leadership of the Liberal Party, the polls are looking much more positive for Andrew Hastie, and Sportsbet has already paid out to punters who put money on the ex-soldier becoming an MP. While the Labor Party is probably glad at this point that it didn’t shell out as much money as the Liberals, a tipster tells us that this flier was delivered this week — linking the China Free Trade Agreement to Tony Abbott: 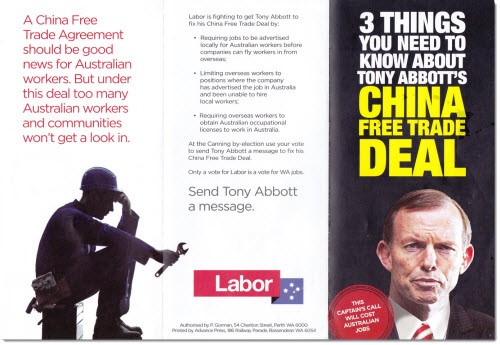 Also on Canning, Bill Shorten is in town, telling the world with a selfie while on a run. Maybe now that Abbott is no longer in charge he spies an opening as the fittest leader of a parliamentary party?

Economic change continues, regardless of who’s running the country. Every quarter the Australian Bureau of Statistics releases a detailed breakdown of who works in which industry, and yesterday it released the industry breakdown data for the three months to August. The quarter-on-quarter figures rarely show significant movement, but over time long-term trends appear. For example, as a proportion of the workforce, manufacturing fell, as it does pretty much every quarter, to a new low of 7.6% of the Australian workforce (in trend terms), from 7.7% in the May quarter and 7.8% in the February quarter. That meant a fall to 885,000, the first time it’s been below 900,000 since the current series began in 1984.

Mining remained stable at 2%; financial services, another long-term shrinking employer, fell to 3.3% of the workforce. Services continued its historic rise, and now employs 8.5% of us, up from 8.4% the previous quarter. And, as always, the health and social care sector powers on. It’s not merely the biggest employer — it grew by 25,000 in the quarter, to 1,479,000 people — but the fastest growing: it now employs 12.7% of us, up from 12.4% in May and 12.2% in February. Health is now well clear of the second-biggest employer, retail (10.4%), and apparently gathering speed. Which is a worry given it’s the sector where measuring productivity is most difficult.

Baird on The Bachelor. NSW Premier Mike Baird leads opinion polls like no other, and he cemented his lead last night, live-tweeting dad jokes throughout the final episode of The Bachelor. Baird said he was stuck on the couch with “man-flu” and was watching the program with his daughters. He showed his naivety early on:

And soon Baird revealed that NSW Treasurer Gladys Berejklian was a fan of the show, which brought in more than 1.5 million viewers for Channel Ten. It was looking good, and some Twitter users thought Baird should commit to live-tweeting The Bachelorette, which starts next week. Then he started to make economic comparisons and became unstuck:

As a tipster pointed out to Crikey, the RBA increases rates to mitigate inflation, not drops them. There’s always someone who wants to ruin the fun.

George Christensen cries poor. Politicians love to say that there’s only one poll that matters — that’s until they get to an issue that they want to avoid or delay making a decision on *cough* plebiscite *cough*. North Queensland MP George Christensen has decided to bring democracy to the people through his Facebook page. Christensen polled his Facebook followers to ask if they would be willing to take Syrian refugees in the electorate (not into their houses, just the electorate), and most said no. Christensen says he is going to write to the Immigration Minister next week (probably because he’ll know who it is by then) and say that the economic situation in Dawson isn’t conducive to taking refugees. Imagine if the governments of Lebanon and Jordan said that? 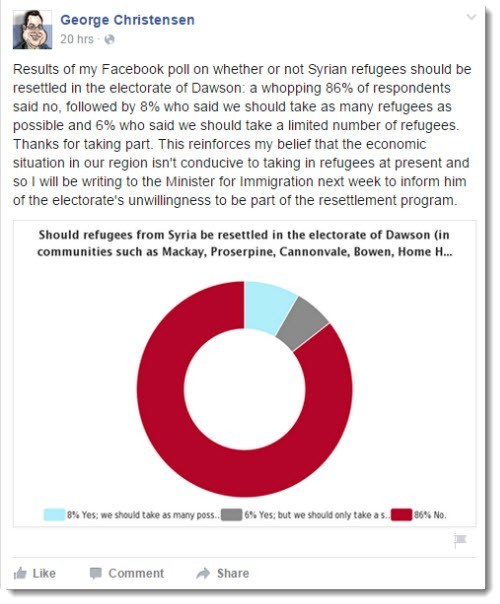 Shield your eyes. The American system of electing its presidents has its quirks, as we’ve mentioned before. But sometimes we just can’t make any sense out of it all. We’ve already noted that leading Democratic candidate Hillary Clinton has some quaint items available in her merchandise store, but a tipster pointed out that Ted Cruz supporters can donate to his campaign by purchasing this poster. We really hope this trend doesn’t catch on here … 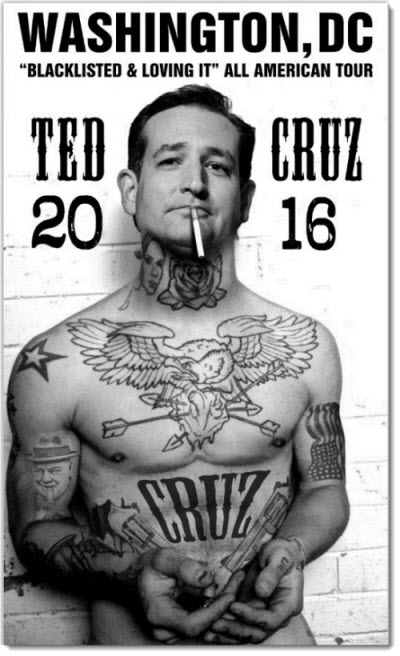 George Christensen cries poor. Of course they did! Who follows this moron on Facebook? Why, his Friends, of course!!

The CMFEU is funding those ads. Next to be bankrupt?

I’m astounded that anybody would follow George Christensen on Facebook. Oh wait, some people do. Which people?

Christensen is a nasty turd of a man

Vasa – yeah and he seems to know that his voters also are.