You’re all fired. While this week in politics has been anything but conventional, a tipster has pointed out a particular parliamentary convention that seems to have fallen by the wayside in the past few years of regular leadership spills creating a revolving door of Prime Ministers. According to the guide to House of Representatives Practice, the ministry is meant to be dissolved as soon as the prime minister loses his or her job:

Throughout the spills of the last few years ministers have kept their gigs (unless they resigned), until the new PM shuffled the portfolios to suit. But of course if everyone followed procedure had we’d miss out on the awkward public job applications from senior members of the government.

Don’t you, forget about me. Robert Menzies had his “forgotten people”, the middle class who he pitched the Liberal Party to, but it looks like Malcolm Turnbull has his own set of “forgotten people” to deal with. Yesteray’s Wentworth Courier, the local paper for the new PM’s electorate, called on Turnbull “Don’t forget about us”. Is that really a concern? Wentworth is one of the richest electorates in the country — something tells us the people of Vaucluse, Woollahra and Double Bay do not need to worry about being forgotten by a Liberal government. 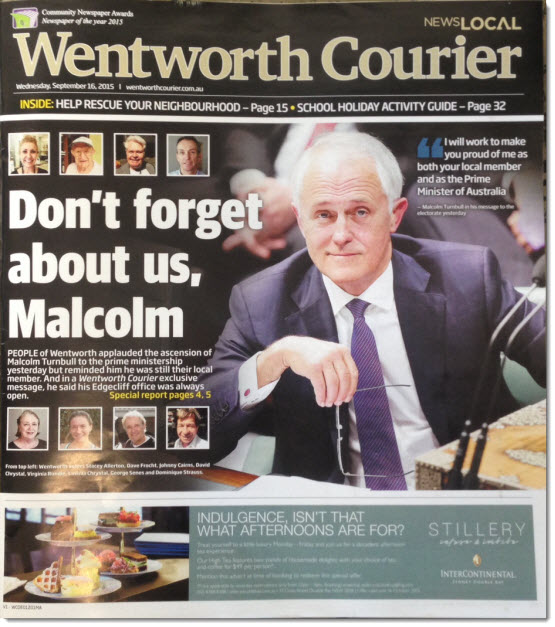 Chinese doublethink. One of the persistent doublethinks of the Abbott government was how the “free trade agreement” with China was meant to be a spectacular achievement and a boon for Australian jobs, and any opposition to it was racist, while the government was engaged in its own xenophobic scaremongering about Chinese acquisition of residential property. Chinese workers good, Chinese investment bad. That continued into the Turnbull era yesterday, with the government introducing legislation for the China Australia Free Trade Agreement at virtually the same time outgoing Treasurer Joe Hockey dragged the Tax Commissioner into a media conference with him to boast of the success of what Commission Chris Jordan called “community dob-ins” of foreigners buying real estate. This “snitch on an Asian-looking auction bidder” campaign is — or should we start using the past tense  — Joe Hockey’s only response on the issue of housing affordability, and one the extraordinary xenophobia that has never been mentioned by the media, with the honourable exception of Michael Pascoe. So which is it, Prime Minister: is Chinese investment good or bad?

Sharing is caring. We noted last week that new kids in the press gallery BuzzFeed haven’t found an office of their own yet, with political editor Mark Di Stefano breaking yarns from the lunchroom, but we hear that could change soon. A tipster tells us that BuzzFeed‘s reporters could end up sharing an office with The Conversation‘s Michelle Grattan, doyenne of the press gallery. While it’s just a possibility, we hope it does end up happening — it would be an educational experience for all involved. We can just imagine BuzzFeed reporters explaining what it means to slide into someone’s DMs while Gratts regales them with political stories from before they were born.

Swanny, watch the throne. Wayne Swan has given no indication he’ll step down at the next election, but that hasn’t stopped the next generation of Labor hopefuls laying the groundwork to take his spot as the member for Lilley. A Crikey tipster has supplied the following wry commentary on the process, inspired by the efforts of Anika Wells, whom Crikey has previously pegged as a possible contender for Swanny’s job:

“Step 1: Buy a house in a marginal seat and make friends with the sitting MP.

Step 2: Organise a bunch of pointless community events to tick a few boxes. Make sure you get to wear a high-vis vest and have a megaphone to make you look official. This is VERY important.

Step 3: Ensure you’re not a threat to any other QLD MPs Cabinet aspirations.

Follow these simple steps and you too can parachute yourself into a seat even if you grew up on the other side of town, went to a posh bayside school, and have subsequently spent your whole adult life in affluent, hipster suburbs in Canberra and Brisbane.”

Our tipster continues: “It’s hilarious watching their social media posts about visiting schools and going to community events. Like, ‘yeah in my spare time I go to school fetes even though I have no children. I just like toffees and coconut ice it’s totally legit.’”

Malcolm in your mouth. What does every Prime Minister need at the end of the day? To kick back and bask in power with an ice cream, of course. Gelato Messina, the upmarket ice cream chain across Sydney, Melbourne and the Gold Coast, knows how important ice cream is to a new PM, creating and naming a flavour of ice cream after Turnbull yesterday. Called “Malcolm’s Malted Milk”, the description reads “malted white chocolate gelato with peanut, banana and choc cream cheese pie. It’s not going to be Malcolm who’s crying over this spilled milk #libspill”. We could do with a scoop of that. 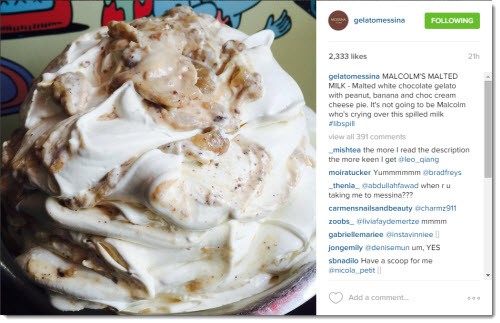 Tips and rumours: Malcolm in your mouth