Media briefs: why was the Walkley deadline moved? … eavesdropping on Corbyn … Brooks spends up …

Did the Walkley Foundation move its deadline so Four Corners could enter? Plus other media tidbits of the day.

Why was Walkley deadline changed? This year’s Walkleys deadline was meant to close on Monday August 31 at 5pm. But at the last minute, the deadline was changed to midnight.

Four Corners’ “Price of Convenience” 7 Eleven expose aired on August 31 at 8.30pm. Work submitted to the Walkleys has to be produced in the period September 1, 2014, to August 31, 2015, but by the 5pm deadline, Four Corners hadn’t yet aired. One rumour doing the rounds is that the Walkley Foundation moved the deadline to give Four Corners the ability to submit the episode before the midnight deadline (though producers would have had to do it the very night the episode aired).

But the Walkleys tells us the deadline was moved for the same reason it’s been moved every year since 2012. “The deadline was moved as we had a huge amount of activity on the entry site and causing it to crash. To ensure that everyone was able to get their entries into the system and not to miss out simply because our server couldn’t handle the load we extended the deadline to midnight”, Walkley awards and marketing manager Lauren Dixon told us. “Unfortunately journalists love a deadline and all try to enter at the same time (right on deadline) and this causes technical problems.”

It’s not clear whether Four Corners entered the episode in the competition, though we’ll find out if it’s a finalist soon enough. There were 1362 entries to the Walkleys this year. Four Corners has an enviable record at the awards — it scored three Walkleys last year, including the Gold Walkley for the Banking Bad episode, which, like the Price of Convenience, was a collaboration between the ABC and Fairfax.– Myriam Robin

Hushed whispers advised. A group of British journalists got the inside word on new Labour leader Jeremy Corbyn’s formation of his cabinet … by eavesdropping.

“There was no glass pressed against a door, simply four journalists in a grand Commons character, loitering, tweeting, trying to see who was coming and going. Behind a not-very-thick door, we could hear conversations which often spiked in volume and were clearly audible.

“‘Andy is IN, Hilary is IN, Angela is IN,’ was the line Rosie would use in an attempt to win people over and get on board with Jezza’s shadow cabinet. But, no announcements came, the conversations continued and then Jeremy emerged, smartly dressed in a black shirt.

“‘How is everything?’ we asked. ‘Everything is wonderful, just wonderful,’ he mused. ‘Would it be a long night?’ we asked. ‘The night is but young,’ he responded.

“By 8pm it didn’t seem that young but it was. The phone calls continued …”

Couldn’t happen at our Parliament House of course — the whole thing was built to avoid this.

Brooks spending up big. Rebekah Brooks has been given the News Corp chequebook and she’s gone and bought herself a nice little number in London — a digital ad company called Unruly,which could cost the Murdoch clan company more than $240 million if successful. “Ms Brooks had spent months travelling worldwide to find potential acquisition targets, before selecting the Shoreditch-based company.” is how the Financial Times spun it on its website this morning.

It is News Corp’s biggest UK deal (but not the biggest media deal since it was spun off in June 2013 — that’s Harlequin, the Canadian book publisher of bodice rippers such as Mills and Boon). News had previously paid US$25 million for Storyful, the Dublin-based viral agency,  and Handpicked, a luxury e-commerce site. According to the media reports, Unruly has revenue of close to 50 million pounds ($100 million). The owners will get a total 58 million pounds in cash (around $124 million) and News will have to pay up to 56 million pounds in earnouts (if it continues to grow revenues and profits). Unruly helps companies spread their video advertising online. — Glenn Dyer

Front page of the day. Packing up … 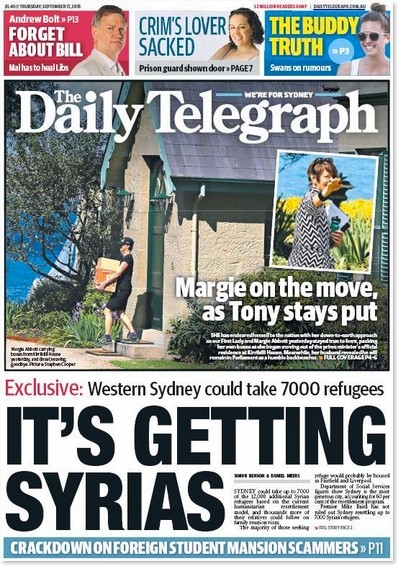 Imagine if Brooks (“subsidised” by Limited News share-holders) was a union official, having her “personal discretionary spending” paid for by employers….?