Malcolm and the economy: time for a mini-budget

The new Prime Minister has an early opportunity to shape his economic policy, but events outside Australia will be powerful influences, Glenn Dyer and Bernard Keane write. 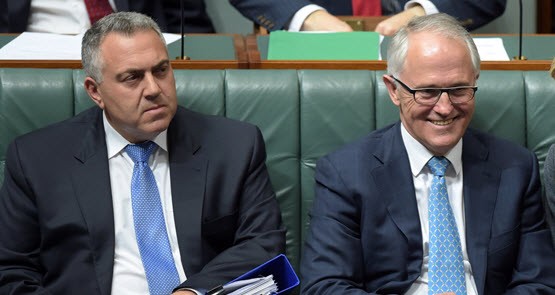 Malcolm Turnbull’s central pitch for the prime ministership was his capacity to prosecute the case for economic leadership. It’s the standard by which he and his new treasurer will be judged. But while the business establishment, especially in Sydney, is enthused by his ascension to the leadership, the reality is that he and his government will be as much a hostage to outside events as Tony Abbott and his government was — and we’re going to see that within 24 hours.

The US Federal Reserve has begun a two-day meeting, with markets, economists and the commentariat split on whether it will lift interest rates for the first time since 2006. This decision will be the big economic event of the early days of Turnbull’s prime ministership, illustrating the impotence of Australia and other smaller economies in the face of decisions made elsewhere. Even if the Fed doesn’t move, the fallout from that decision will hit Australia. And the weakening pace of activity in China will have to be watched closely because it will confirm that our dependence on that country will impact the performance of our economy and the fortunes of the Turnbull government.

Overnight, the Organisation for Economic Co-operation and Development (OECD) cut its 2015 global growth forecast to 3% (the lowest in six years) from 3.1% in June and its 2016 forecast to 3.6% from 3.8%. And it now expects Chinese growth to slow to 6.7% this year and 6.5% next year after 7.3% in 2014 — all underlining the global challenges to Australia, especially from a wobbly China (as the minutes from the Reserve Bank’s September board meeting made clear with extensive discussion about China’s current health).

The big domestic question is the pace of the economy’s transition from the disruption of the biggest investment boom in our history to the uncertainty and sluggishness of a return to a more tradition growth pattern. While the June quarter’s 0.2% growth is unlikely to be a sign of things to come (although commodities-dependent New Zealand, which today recorded 0.4% growth in the June quarter, below expectations and little improved from March’s 0.2%), the Reserve Bank has been keen to explain its view that growth could be lower than expected in coming years. In the RBA’s view, our potential growth rate is reset by an ageing population, lower migration and the impact of the property boomlets in Melbourne and Sydney’s bubble, which is now slowing as clearance rates continue to fall. There’s no recession around the corner, but a lower-growth environment may well be.

The removal of Abbott and Hockey will help the overall malaise undermining both business and consumer sentiment, and perhaps even conjure some of those “animal spirits” Reserve Bank deputy governor Phil Lowe said were needed to get the economy moving. Turnbull’s narrative — and yes it’s early days — is to stress the opportunities of the new, disruptive global economy for Australia, and the need to seize them, which marks a different tack from Abbott and Hockey, who continued relentlessly talking down the economy and lamenting the mess they’d been left by Labor for many months into their own time in office, before becoming almost Pollyannaish in their last days. But there’s only so much positivity political leaders can provide for an economy: their words must be accompanied by actions.

Turnbull’s first opportunity is coming up: Treasury will already be working on the mid year economic update (MYEFO) due by December. Using this sort of set-piece effectively will be crucial to how effective Turnbull is in getting his economic messages through. MYEFO should be used as the opportunity for a mini-budget — not merely to give a clear idea of the Turnbull government’s fiscal strategy, but to signal to voters and business Turnbull and his treasurer’s policies, priorities and direction. With an election year looming, it could also be used to prioritise budget repair ahead of 2016 budget in May that for political reasons can’t be too hardline. Hockey and Abbott were starting the paint themselves into a corner on tax cuts. They should be abandoned — it sends a bizarre signal to voters that it’s time for tax cuts while the budget remains mired in red ink — and a medium-term budget repair strategy should be put front and centre before voters, one that charts a return to surplus while maintaining enough stimulus to help monetary policy do the job it has been doing for years in supporting the economy.

And there are plenty of positives for Turnbull: he might do well to recognise that the flexibility of the Fair Work Act — which Turnbull as then-leader savaged as harming jobs when Julia Gillard introduced it in 2009 — is helping cushion the economy, productivity is better than admitted by business, government and many policymakers, business profits are solid and underlying demand is good, as evidenced by continuing strong car sales, the best business conditions since 2009, according to the recent NAB survey, and the positive impact of the continuing home building boom. The lower value of the dollar is starting to stimulate the economy, and should start generating more tax revenues for Canberra as well.

Tomorrow, Reserve Bank governor Glenn Stevens will make a scheduled appearance before the House of Representatives Economics Committee. He’ll provide a good overview and understanding of the economy in the wake of the Fed decision — one that will be crucial reading for the new leader and his incoming treasurer.

One thing he won’t be doing is bombing another ME country.

The economic performance of the Abbott government was not in my view the main reason for the spill and the ascension of Turnbull to the top job. Having said that, Turnbull has chosen the economy as a narrative around the change that is meaningful. The coalition’s economic reform programme has been stopped in its tracks by a hostile senate and we now have an opportunity to shift it. After 18 months in office, senators like Lambie, Muir and Lazarus should be working out that they are not really contestants on a reality TV show and that the decisions they endorse will have far reaching consequences beyond their terms of office.

Abbott’s demise came from his continuing entrenched unpopularity generated through his inability to really understand what middle Australia was thinking and what it wanted. The issues were peripheral in relation to the huge economic challenge our country faces but he failed miserably in dealing with them.

Knighting Prince Philip is my top pick as showing the dislocation between Abbott’s world view and that of middle Australia.

It is that dislocation that 54 MPs were addressing when they voted him out.

I think your named Senators are fully cognizant of that fact David – hence their voting record. They’re not merely rubber-stamping, nor opposing for the sake of opposition – each of the Independents are voting after having reviewed what is put before them.

That’s not behaviour to be railed against, but lauded.

Chris,
Voting on the merits of legislation should rightly be lauded. But are the cross benchers actually behaving like that? You only put forward a limited list of motivations that might drive a cross bench senator’s vote and not the most likely one.

The most likely motivation in my view is to vote in a way that gives you the best chance of getting re-elected.

So when legislation comes through that might be electorally unpopular, such as say, an increase in the rate of the GST, they will probably vote against it.

Is that a good thing? I suppose it is if you are a rusted on committed lefty who believes rich people – those earning more than $100k – should pay more income tax. But the rest of us see the seduction of populism in that sort of vote and the hope that a quota is more attainable with such populist and unaccountable voting.

@ Chris Hartwell – I agree with your comments. Well said!

One Hand has never been able to admit the fact that it is the LNP POLICIES that are the problem. NOT the Opposition and the Senate cross-bench members who vote against them for very good reasons.