What were the Greens doing while all eyes were on Tony Abbott? 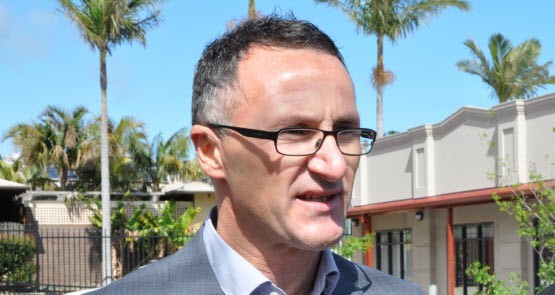 Greens leader Richard Di Natale’s decision to strip Lee Rhiannon and Janet Rice of some portfolios to give to new senator Robert Simms has upset some in the party, particularly because it was announced under the cover of the change of prime minister. At the same time, Di Natale decided to give the schools portfolio to Christine Milne’s replacement, Nick McKim. This move is also likely to raise eyebrows, given McKim’s controversial work as education minister in Lara Giddings’ former Labor government in Tasmania.

On Tuesday, as the rest of the country spent hours wondering where our soon-to-be-ex-PM Tony Abbott was after he lost the Liberal leadership ballot to Malcolm Turnbull, the Greens held their first party room meeting since the arrival of Penny Wright’s replacement, Robert Simms. At this meeting, it was decided that new senators Simms and McKim would each get three portfolios.

Simms received LGBTI and marriage equality from Rice; tertiary, technical and further education; and water and the Murray-Darling Basin (the latter two from Rhiannon). McKim received innovation, competition, and small business; schools; and attorney-general (the latter two were held by Penny Wright).

There was a post-party room briefing held in Parliament on Tuesday, but there was no official announcement from the Greens on the policy change. After the meeting, Rhiannon put out a media release acknowledging her loss of the portfolio.

“From working with students and staff to successfully defeat the Coalition government’s attempts to wreck our public universities, to fighting on behalf of TAFE across the country, I have been proud to put forward the Greens’ vision on high quality, public and free education,” she said in a statement.

The decision to strip Rhiannon of the higher education portfolio and give schools to McKim has angered some Greens in New South Wales. Crikey understands that the state executive of the New South Wales branch of the Greens has decided to write to Di Natale asking him not to strip Rhiannon of the education portfolio, and it is understood that the matter will be discussed at the Greens’ national council this weekend.

The New South Wales Young Greens have also written to Di Natale criticising the decision, and in a Facebook post they slammed the decision-making process:

“This decision will hurt the entire education movement across the country. Activists, students, NAPU and NTEU & AEU members have relied on the support of Senator Rhiannon for many years, and have developed a strong working relationship with her. These close relationships, and the actions Senator Rhiannon has taken, have allowed the Greens to be at the forefront of the campaign against deregulation, and together we have played a key role in defeating it. This decision will, in many ways, alienate thousands of young people and union members from the Greens.”

The NSW Young Greens say they object to the “authoritarian” nature of Di Natale having the final say on portfolios, and the lack of consultation with Greens members. They said in the post:

“As a grassroots party, we believe that members should have input into all decisions. Particularly ones as major as portfolio changes, which impact upon us as members, activists and voters.

“By making this call, the Australian Greens have created a devastating blow to the activists, students, staff and union members who have been fighting fee deregulation, and for free education for many years. The NSW Young Greens object whole heartedly to this decision.”

The decision to give McKim responsibility for schools is also controversial because of his time as education minister in the former coalition government with Labor in Tasmania, during which he set out plans to close down 20 schools in the state, before backflipping when it became apparent the move was deeply unpopular.

McKim acknowledged the work he did in education in Tasmania in a release announcing his new responsibilities:

“As a former state minister for education, I know well the challenges facing our schools, and will continue to fight for the full implementation of the Gonski reforms.

“Australian students and teachers deserve better than the funding cuts they are getting from the Federal government.”

Rice lost her LGBTI portfolio after just three months, and shortly after backing the cross-party senate bill for a plebiscite on marriage equality at the time of the next election. The committee report into that legislation, of which Rice was a member, recommended yesterday that the government pass marriage equality into law through the Parliament, and rejected the government policy — being maintained under new Prime Minister Malcolm Turnbull — that a plebiscite be held after the next election.

It comes as the party is facing criticism for its decision to replace both Wright and Milne with two male senators. The shift in the balance means an estimated 70% of cabinet-level portfolios within the Greens are held by men.

Di Natale’s office denied to Crikey that the timing of the change in portfolio to coincide with the change in prime minister was deliberate, insisting that it was the first time the party could meet after Simms was chosen to replace Wright, and stating that there was consultation in the parliamentary party on which portfolios each senator and MP would receive.

There is no “Policy change”, that’s incorrect. The reshuffle was decided not by Di Natale personally, but by consensus of the party room. Tertiary education and LGBTI fit perfectly for Simms, who is an LGBTI whose history in politics is characterised by championing free degrees, and who is defending an at-risk seat with a low profile. It makes sense for him to get those jobs.

Reshuffle was announced in the usual way, with lists sent to the media and published on the website. I mean what, were they supposed to advertise it in The Australian? Were they supposed to try and hold a press conference in the middle of #libspill?

And of course they couldn’t leave McKim and Simms hanging with no portfolios, while other MPs and their offices were arguably overloaded.

I also love how this was editorialised from a beatup based on a few misconceptions and a cranky statement from someone in the NSW Young Greens who hasn’t done their research into the headline story of the Crikey newsletter. “Greens turmoil” I see in the subject line. I can’t imagine what the headline would be if there was actually anything happening.

I’m one of those members thoroughly pissed off with these moves. The main reason is that they contravene one of the four principles of the party – as do many of the moves in Canberra.

And that is grass roots democracy.

And a response to PhoenixGreen, what consensus of the party room? When did we hear about it?

The party room consists of the 11 national Greens MPs, including Rhiannon, who all discussed, decided and agreed to the changes together. That is the process for these reshuffles.

It would be an extraordinarily impractical system in which grassroots members micromanage the portfolio jobs of MPs from outside the parliament, taking into account people’s interests, skills, the skills of their staff, the geographic relevance of various issues and a hundred other factors unless you had a material policy difference between the candidates. There is no material policy difference here whatsoever, so unless this is some kind of parochial complaint about the geographic distribution of jobs I really can’t understand what the problem is.

Ultimately it doesn’t matter who gets what, except for the availability and workload, level of interest, need of publicity and expertise in an area of our MPs. Simms fulfills all those criteria to take on the higher ed portfolio, and he’ll continue Rhiannon’s work campaigning for free degrees, as he already has a long history of doing outside the parliament.