Musician Steve Kilbey of The Church recounts his early run-ins with an adolescent Malcolm Turnbull in his memoir Something Quite Peculiar.

Steve Kilbey’s memoir, Something Quite Peculiar, published late last year by Hardie Grant Books, recounts life before, during and after fame found him via his band The Church. In the following extract he recalls 1971 when as an ambitious debating champion he encounters the far more ambitious Malcolm Turnbull, a “fucking square” boy-man. Kilbey’s mother presciently declared in her kitchen: “One day he’ll be the prime minister of Australia”.

It was around this time I also got quite involved with debating. I’d already been doing it for a few years and eventually got picked to represent the school along with two friends, Bronwyn and Joanna. Bronwyn and I are still friends to this day; she’s a professor at some university in Queensland. We made a good team. Joanna was very good looking and had a forthright manner and she was our first speaker. She also had a big pair of breasts, usually uncaged; I felt this somehow gave her authority. I was the second speaker: the long-haired kid with the smart mouth. Bronwyn was third, and she waded in with devastating precision.

Eventually the three of us became the ACT team and we went to a big debating play-off. We were representing our state, only our state was a territory … oh never mind! We went to Adelaide and Sydney and stayed in hotels and everything. At night I’d roam through the halls changing all the orders people had left on their doors, ordering 10 plates of eggs and 15 bowls of Corn Flakes and things like that. What an anarchist!

Doing the debating thing gave me a taste for being on tour and staying in hotels; it was really exciting. The second year we did pretty well and knocked our first two opponents out of the ring. But for the final we came up against New South Wales who had this geezer who was already a legend in high-school debating circles: one Malcolm Turnbull.

Malcolm was third speaker for NSW and he demolished our flimsy arguments, and us, as if we never existed. And put paid to our chance of being the Australian champions. He wasn’t like a teenager; he was already like some young lawyer. It was as though the ’60s had never happened for Malcolm — no long hair, no swearing and no hint of a fashionable item of clothing. He meant business. He had a sneering, arrogant, know-it-all manner that was dynamite on the debating scene.

Even as he sat there watching me speak I could feel him shaking his head and writing a thousand notes to himself on how he could rip apart our case. He was the Muhammad Ali of high-school debating. The total heavyweight champ. It almost wasn’t fair! He was like some big kid of 14 playing football with the under 7s. He had more intellectual firepower than any other kid I’d ever seen debate, and I’d seen a few intimidating speakers. I love to come upon freak excellence of this kind; it fascinated me, although Malcolm himself was so fucking square.

As luck would have it Malcolm and the rest of the NSW team came down to Canberra to give us another thrashing, and Malcolm got billeted to stay at my humble abode in sunny, treeless Lyneham. Well NSW gave us another good hiding: it was like a bunch of knights in chainmail going up against a bazooka! Afterwards we went to a pub in Kingston and Malcolm tried to chat up Joanna. You remember she was very forthright and that night she was quite to the point. Malcolm chatted and chatted. Joanna wasn’t interested. I wonder if she would’ve been had she foreseen his future? But she rejected him rather rudely and colourfully with something like “fuck off”’, I imagine, though her exact words have flown from my mind over the intervening years.

Soon we were in my little Mazda driving back to Lyneham. Malcolm stamped so hard on the floor — he was that pissed off with Joanna — that I feared for my rusty chariot’s wellbeing. He was muttering something like “Who the fuck does she think she is rejecting a big cheese like moi?!” Of course those weren’t his exact words because he didn’t ever swear.

Now strangely enough back then Malcolm was a huge, huge Labor man. I mean he was a staunch lefty. So we were driving along and I thought I’d get his attention because he was pretty much totally ignoring me; like an adult might ignore some kid he’d been forced to spend time with. And both he and the kid thought the other was a total turkey! So I said something provocative and somewhat silly and boastful and untrue — the stupidest thing I could think of.

“Oh, Malcolm, I’ve been, um, asked to join the Country Party,” I said.

I looked over at him slumped in my tiny tinny bomby car, wondering if I’d impressed him. His look was withering. He snorted in derision and then chuckled to himself in a very off-putting way.

“As what?” he asked. And I didn’t have an answer. We didn’t speak for the rest of the trip.

The next morning Malcolm was hanging around in the kitchen dressed in a kind of expensive smoking jacket and — was it a cravat? He and my mother were talking about grown-up matters (she in her Queen Elizabeth II accent). Malcolm was telling her all about the bad scene between his mother and father.

Then they discussed the politics of the day, and of course Malcolm was a know-it-all and a mum-charmer at the same time. When he’d gone my mother declared that one day he’d be the prime minister of Australia. And my mother was always right and she’s still waiting to see her prediction fulfilled —  strange to see a problem as banal as “ute-gate” bring a complex and together guy like our Malcolm undone. But you never know what fate will roll into your life, and politics is just like rock’n’roll, I guess, with its winning and losing streaks.

*This extract from Something Quite Peculiar is republished courtesy of Hardie Grant Books. This article was originally published at Daily Review 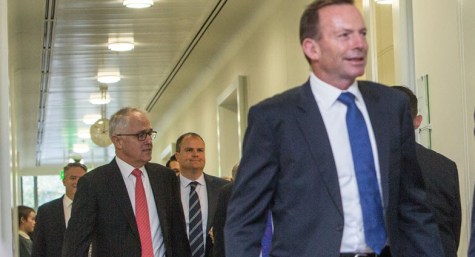