Turnbull leaves his legacy as comms minister in the hands of … Joe Hockey?!

The obvious replacement for Turnbull in the Communications portfolio is his junior, parliamentary secretary Paul Fletcher. But he needs to offer some kind of fig leaf to Abbott's deposed frontbenchers. 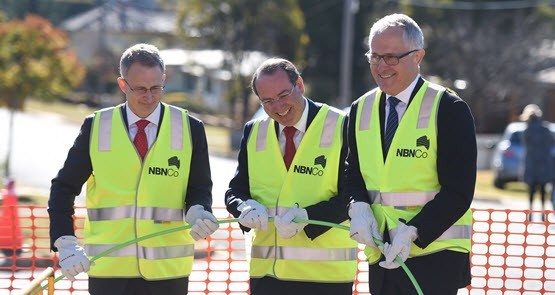 Malcolm Turnbull’s mandate as communications minister was to “demolish” Labor on the NBN, and two years on he largely continued rolling out the ALP’s network.

Turnbull was appointed as shadow communications minister by Tony Abbott after the 2010 election to “demolish” Labor on the issue of the National Broadband Network. The popularity of the project was, in part, why the Coalition failed to gain seats in some places, particularly Tasmania.

The Coalition’s 2010 NBN policy was a dog, and Turnbull’s job was to essentially neutralise the NBN as a win for Labor. To that end, he was successful, insofar as Labor’s own troubles managed to take out any positive it could bring. He balanced the forces within his party that wanted to tear down the entire project, and announced that his version of the NBN would be NBN-lite. It would be “cheaper, fast, affordable” as the three-word slogans of the era demanded. The full fibre-to-the-premises network would be scaled back, rolling out fibre-to-the-street instead, and using the legacy Telstra copper network, and the cable-TV networks to make up the rest. All for $29.5 billion of government investment, and upgraded by the time of the next election.

Turnbull explained the policy in great detail, and never truly shied away from talking to the tech media about his plans for the NBN. He held debates, numerous press conferences and brought in experts from around the world to advocate for his plan. However, he was, at times, combative with certain sections of the media and online. It became a religious war for some, with Turnbull referring to those who advocated strongly for the full fibre-to-the-premises rollout as “fibre fanatics”.

When elected in 2013, Turnbull quickly discovered that his plan wasn’t ever going to be that simple. No fewer than six reviews into the NBN, a new deal with Telstra and Optus, a new executive team and board, and a new name for NBN Co — now officially just nbn (yes, that is a lower case initialism) following a $700,000 rebrand  — and two years on the company is only now just preparing to roll out Turnbull’s version of the NBN, which will now cost between $46 billion and $56 billion, although the government is still only committed to investing $29.5 billion itself, forcing NBN to look for money elsewhere.

To date, most of the achievements of NBN Co have been to continue rolling out the plan advocated by Labor. The next year will be key for Turnbull on the NBN, now that he’s Prime Minister. If, as he has often promised, the rollout ramps up and millions are connected to the Turnbull version of the NBN over the next year, it will remain a neutral issue for the government.

The suggestion, floated by some, that Turnbull will “see the light” and return to a full fibre-to-the-premises rollout now that he is PM seems very fanciful. For those who have spoken to Turnbull know, he truly believes this policy to be the best for the government.

Labor, although it has drawn attention to the cost blowouts and time delays for the NBN, has largely run flat on the NBN in opposition. The party’s official policy, although they don’t talk about it much anymore, is to complete the rollout in two stages. That would mean keeping the current Coalition plan, and then going back and to roll out fibre afterwards. If Labor were to stop and start again, it would only delay making faster broadband available even longer than it already has.

The only problem with Labor’s policy is Turnbull could easily do the same, if, as he has always argued, demand is there for the higher speeds and service available on a full fibre-to-the-premises network.

In other policy areas, Turnbull largely compromised on his previously held positions. Prior to the election, Turnbull was dead opposed to internet filtering, and although he argues that the piracy site-blocking legislation is not filtering because it operates through the courts, not by government, many have branded it an internet filter.

Broadly in copyright infringement, Turnbull argued in opposition, and continued to argue in government that the best way to stop piracy is to make content available in a timely and affordable manner, but the government is still forcing the ISPs and rights holders to develop a code to crack down on pirates.

On mandatory data retention, Turnbull was brought in to explain the policy after it was initially fumbled by Attorney-General George Brandis, despite the fact that when he was in opposition, Turnbull said he had grave concerns about it when first floated by Labor.

The area Turnbull had the most interest in, during his time as communications minister, was the digital economy. His work in establishing the Digital Transformation Office and plans to make the government operate more like a start-up were only just coming into their own before his ascension to the office of prime minister. In his language yesterday, it is clear Turnbull wants all policy to be “agile” and capable of reacting to disruption, so it is expected that the DTO’s work will be crucial in the Turnbull government.

The first Turnbull ministry will be decided over the weekend, and sworn in on Monday, the Prime Minister has indicated. There was speculation today that Treasurer Joe Hockey would be moved to the Communications portfolio to make way in Treasury for Scott Morrison.

At a press conference today, Hockey wouldn’t confirm or deny the reports.

“I am instinctively a loyal person. You know that. And I see the job that I have as one being loyal to the Australian people. That is why I am doing my job. It’s what I’m here for, to be loyal to the Australian people, to do what is right for them. And in relation to prime ministers, I have always been loyal and supportive of leaders. And that is not going to change. I’m sorry, but I don’t disclose discussions,” he said.

The move for Hockey would be interesting. He has not been largely across the detail of the NBN when he was Treasurer. Most recently in July, he incorrectly said the government was spending $70 billion on the project.

“The Minister for Communications, Malcolm Turnbull, has engaged in complete upheaval at the NBN, which is now delivering an NBN that’s been rolled out much faster, and more effectively than it was. There’s still much work to be done. I’m not for a second suggesting there isn’t. But, I’m confident, I mean we’re spending in the vicinity of $70 billion. It is by far, the largest infrastructure project in Australia,” he said.

The obvious replacement for Turnbull in the Communications portfolio is his junior, parliamentary secretary Paul Fletcher. The former Optus executive is across the detail, and has been an effective junior implementing the mobile black-spots program.

However he most infamously announced, and then backflipped in a matter of hours on an opt-out internet filtering policy two days out from the election in 2013. That embarrassing gaffe resulted in Turnbull having to step in and announced there was no such policy the same day it was announced and published on the Liberal Party website.

Hockey being put in the role could be largely symbolic. It’s already clear Turnbull will be keeping close tabs on the portfolio. In his new agreement with the Nationals, he has already committed to more funding for mobile black spots in regional areas. Turnbull being very well across the detail on the NBN would mean he could easily continue to turn up to announcements and answer all questions related to the NBN.

Why do you keep on trying to justify Turdbull?
Everyone I know who is a tech head says that his version of the NBN is a dog!
Get your facts right, Josh!!

CML, well said. Friend of mine had his landline cut off and the cause; old copper wires at the exchange. Isn’t the Turnbull NBN fibre to the node using existing old copper wires to connect to the premises?
It might be rolling out faster and more effifciently but in future years is it going to work in its existing form?

They say that CML because it’s a technically and economically inferior offering – a network is only as fast as its slowest link, and copper can only maintain high speeds (high being relative – 100Mbit is not high speed on internal networks although is decent enough for a wide area network) for distances of, at best, 100m. And that’s assuming the copper hasn’t degraded (a poor assumption for the telstra network)

So we’ve established technical inferiority. Let’s move on to economic.

The offered speeds do not qualify as high speed as far as our international competitors are concerned. So it stands, if we are truly to compete, we’ll need to upgrade our capacity. A simple thing, yes? Well, sort of.

It’s simple enough to do – run fibre from each node location to each premises, pop the node, join the respective fibre lines (better hope your node doesn’t utilise multiplexing. That’ll complicate matters. Expensively) and seal everything up. Simples. And costly. Joining fibre cables is a far more intensive task than running fibre cables, and each join is an opportunity for signal degradation to occur. So even if we accept the rationale of paying less now, it is inevitable – five years, ten, whatever – that a full fibre solution will be required. And it will cost more than having just done it correctly the first time, to say nothing of the opportunities lost – in business, in education, in health – from implementing this half-baked bandwidth bandaid.

Turnbull has committed to implement a third rate NBN (nbn?) so one imagines Hockey couldn’t do much as Communications Minister to make it any worse. \

Or possibly I underestimate Joe?

How funny would it be too put a person who was being pilloried for poor communication in charge of the communications portfolio.