Is that Bronnie? As Tony Abbott made his final speech as prime minister yesterday, more than half of the press gallery assembled couldn’t hear what he was saying because Sky News was flying a helicopter above Parliament to film the packed prime minister’s courtyard. The chopper flew off about halfway through the speech, so the assembled journos still got to hear how it was all the “febrile” media’s fault for reporting anonymous leaks.

It is an almost fitting end to his prime ministership that in his final speech, Abbott couldn’t get his message out because he was drowned out by the media. Incidentally, this is the same helicopter that tracked a car that was believed to be Abbott’s down the streets of Canberra, OJ Simpson-style, until it stopped at a car wash and was thought to maybe not be Abbott’s car after all.

Malcolm Farr also used the packed conference to snap a photo of Devine and Crikey’s Bernard Keane together, because he thought it remarkable that the two could be seen together.

To protect and serve. In question time yesterday, Nationals Leader Warren Truss joked that the Australian Federal Police would be happier with Malcolm Turnbull being prime minister because he wouldn’t be as fast on the bicycle as the 28th prime minister was. It appears they already have a lot of work on their plate.

Abbott, who never got to move into the Lodge, lived in AFP training facilities for the added security that goes with being prime minister. This has yet to be sorted for Turnbull, and yesterday we spotted a significant number of AFP officers and cars patrolling around the Kingston Foreshore, where Turnbull’s lavish Canberra apartment is located. The prime minister himself was also seen dining on the foreshore last night. No doubt he will be forced to move from this swanky hipster location to more appropriate lodgings in the next few weeks.

You colonials are all the same. How hard is it to remember a name that has been in every major newspaper in the country this week? Pretty hard for The Guardian, which once again confused Malcolm Turnbull and Malcolm Fraser. We know Fairfax suffers from having subs in New Zealand — is The Guardian suffering from subs in the UK? 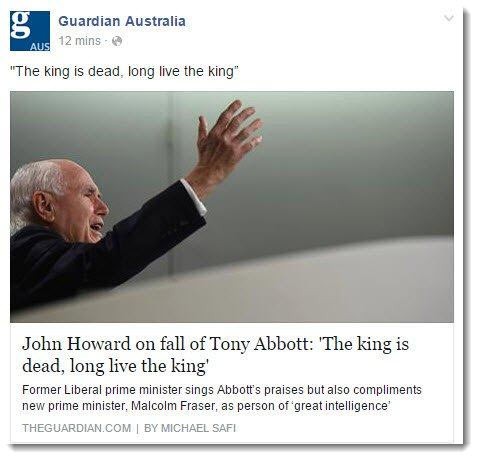 Turnbull at Wombat Hollow. Last month we reported that Malcolm Turnbull was lined up for a gig this week — just not the one he ended up with. Turnbull was due to appear this Friday at Wombat Hollow, a retreat in NSW’s southern highlands owned by former Liberal NSW MP and former Liberal Party treasurer Michael Yabsley. Yabsley was known to be close to Turnbull and had spruiked the event saying: “All the signs are that the level of scrutiny and anticipation are about to go into overdrive again”. Could he see the future? If he could, perhaps he didn’t expect the future to come so soon. Yabsley sent out an email today saying that Turnbull would no longer be appearing at the lunch this Friday, but “the Prime Minister has committed to speak at the Wombat Hollow Forum in the near future instead of this Friday”. Attendees to the luncheon will now be treated to the “Wombat Hollow Forum of Brilliant Ideas” instead.

Empty house in PM&C. You would think that the change of prime minister would lead to a flurry of extra work for the Department of Prime Minister & Cabinet. The building appeared empty at 5.30pm last night, however. With five prime ministers in five years, perhaps they’ve got all the procedures in place to get it done quickly.

Briggs breaks a leg. Rumours floating around Parliament House on Tuesday were that Liberal MP Jamie Briggs, who was spotted in the halls in a wheelchair, had hurt his leg after falling off a table on which he was dancing with Joe Hockey. Briggs has denied this, stating he hurt his ACL while running. The topic of dancing did not come up in the party room meeting on Tuesday morning. Briggs did ask a question, and one MP wondered why he did not stand up to ask the question, before realising what happened.

Christopher Pyne did bring up singing and dancing, however, telling the party room that after the change of leadership, the government now needed to get back up on the stage and “keeping on singing”.

Greens ructions? Earlier this week Greens staffer Osman Faruqi announced via Twitter that he was stepping down from his party roles to try out some new projects. Along with working in Senator Lee Rhiannon’s office, Faruqi was also the Greens candidate for the seat of Heffron at this year’s NSW election, and his mother is a NSW MLC. The decision to step aside and do something new has set tongues wagging in inner-city Sydney circles. Ms Tips hears that Labor expected Faruqi to be the Greens candidate in the seat of Sydney, running against Tanya Plibersek. Crikey reported on ructions within the NSW Greens after the state election, with tension over the lack of support for inner-city candidate Chris Brentin boiling over in emails criticising the party strategy. We asked Faruqi if factional issues were at play in his choice to resign from his roles. “Not at all. My decision to step back from the party was a personal one. I’ve enjoyed my time in the Greens and the support members gave me as a candidate in the state election, but after being an active member for nearly a decade it’s time to do something different.”

Hold your fire. We hear that a sigh of relief could be heard for some union organisers this week, after the decision was made to delay printing posters attacking Tony Abbott, using his name and picture, just in time for him to be ousted. Some designers are on the ball though — this anti-Turnbull poster was sent to Crikey today: 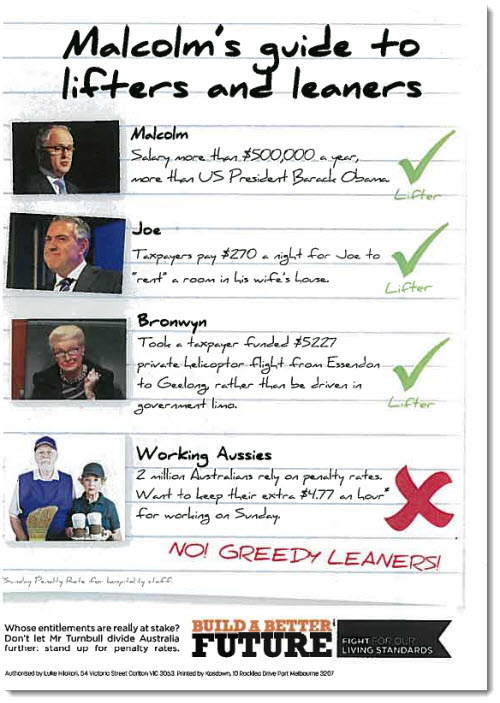 Yes vote is an ugly win for Turnbull, but it’s still a win