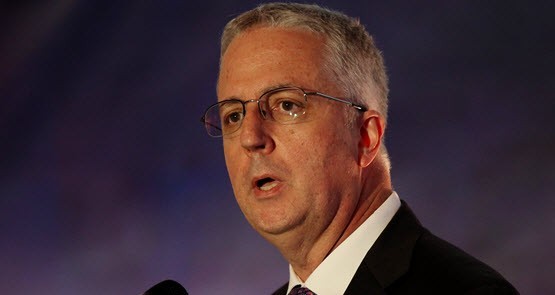 In the normal run of things, whenever the managing director of the ABC has to make a major speech he’s on a hiding to nothing. If he plays safe and trots out all the familiar guff about the national broadcaster’s vital place in our culture, his speech is likely to be ignored as banal. Yet if the MD decides to say something that could even remotely be interpreted as provocative or controversial, the ABC-hating commentariat will have him for breakfast in a week of unrelentingly rabid News Corp columns.

But these are not normal times for Mark Scott. He’s just confirmed that his 10-year occupancy of the big corner office at Ultimo will end in mid-2016. Protecting his job is therefore no longer an issue.

Monday night’s change of prime minister also offered the MD the opportunity to speak more freely. Malcolm Turnbull is something of an ABC darling, and, as communications minister, he often returned that love, defending the corporation’s independence against its strident ideological enemies within cabinet. The post-Abbott frontbench is likely to be far less insistent that Aunty open the batting for Team Australia — especially with a federal election not far off.

So how did Mark Scott seize this precious moment of clear air when he rose to give the inaugural Brian Johns Lecture last night at Macquarie University in Sydney? Well, not too robustly.

The title of his speech said it all: “The Future of the Australian Story”. Yep, the same old dire warnings that, in the face of rapidly changing technology, commercial competition and limited funding, local content on the ABC was in danger of being squeezed off our screens by those dastardly foreign cultural imperialists (notably the Poms, the Yanks, Facebook and Netflix).

Off to one side in the audience, sitting just a few seats from each other, were three prominent media figures: ABC chair James Spigelman, former Foxtel and News Corp boss Kim Williams, and Angelo Frangopoulos, head of Sky News Australia. With the search for a new managing director already underway, it’s not surprising that very few words — if any — were exchanged between that trio.

Brian Johns (the MD from 1995 to 2000) sat in the front row. Despite the many generous tributes paid to his long career, Johns did not speak last night and did not look well.

Up on stage, Scott favoured his audience with a lengthy preamble peppered with plenty of blowing-your-own-trumpet stuff about the ABC’s successes (news, kids’ programming), but remarkably few references to Aunty’s most obvious triumph in the past decade: its powerful internet presence. That’s still a very sore point with the commercial media in general (and Rupert Murdoch in particular), so maybe the departing MD was being mindful of where his next job offer might be coming from.

Inevitably, as we closed on the nub of his theme, Scott invoked the familiar double-bogey of Threats to National Identity and The Great Dumbing Down. “We may have plenty to read and watch as audience members,” he said, “but is it the kind of content that makes us informed citizens; that reveals what some people want concealed; that holds the powerful to account? That helps Australians understand each other better and the world in which we live?”

Indeed, rhetorical question was the dominant device of the speech, and while Scott certainly pointed to some pertinent problems, he seemed reluctant to propose many answers. Instead, that overworked two-word phrase “Australian stories” was used 17 times. “Australian storytellers” and “Australian content” also enjoyed multiple mentions.

While he welcomed the additional money that the outgoing Howard government had given the ABC for children’s content and drama, Scott argued it was now no longer sufficient. “At current levels, it will not be enough to counter the dilution in quality Australian content we are likely to see on our screens in the years ahead through inevitable market forces at work in commercial and pay-TV markets.”

And that, stripped to its essentials, was the thrust of his whole lecture: if you want the ABC to produce more local content — especially drama — then you’ll have to give us more money. That’s hardly a new position for the national broadcaster to adopt, but at least Scott was prepared to canvass some more creative options than simply trying to bludgeon the government into increasing the ABC’s annual budget appropriation.

He flew two kites for debate, both of which are variants on the “tax the rich to support the culturally worthy” idea:

It is, of course, unlikely that either of these proposals will cut much mustard in the new, business-oriented cabinet lead by Malcolm Turnbull. Whoever succeeds Scott as ABC managing director will soon confront the truth that he himself conceded during the brief Q & A session that followed his lecture. “Everybody has their hat out in Canberra.”

This is not the time for Mark Scott to build empires