Isentia Index: Sales of onions up as Australia memes the heck outta #libspill

There was only one game in town this week ... spill time!

“It’s on!” people cried as our new PM Malcolm Turnbull, up to second place this week, held a press conference on Monday afternoon to announce he would be challenging the leadership of now former PM Tony Abbott, in first place with over 78,000 mentions (and most within the past two days). The signs weren’t positive for Abbott after Foreign Minister Julie Bishop, third place on our index, said she wouldn’t stand as deputy leader of the Liberal Party if Abbott won the vote. Abbott’s response was “I expect to win”, which was pretty much the kiss of death, and after the results were announced 54-44 to Turnbull, Abbott was nowhere to be seen until around 12:30pm Tuesday, where he made his concession speech and mentioned those pesky boats one last time.

Queensland Premier Annastacia Palaszczuk’s call to Tony Abbott on Monday to address family violence was quickly replaced by hopes she can work with the new PM, and the possibility of changing local MP terms from three years to four. Someone please let her know there are no guarantees in what Abbott affectionately referred to as the “Canberra games”.

Canning candidate Andrew Hastie used his time in the media spotlight to carefully voice his support for the government, not any specific person, until Turnbull was the winner and Hastie could confidently pick a side, and Deputy Leader of the Opposition Tanya Plibersek enters our index this week in 19th place after she voiced a “smidge” of sympathy for Abbott. I’m starting to feel a bit nostalgic in any case — reports Abbott sent his resignation in via fax was the icing on the cake. Here’s to Australia’s new national sport, leadership spills. 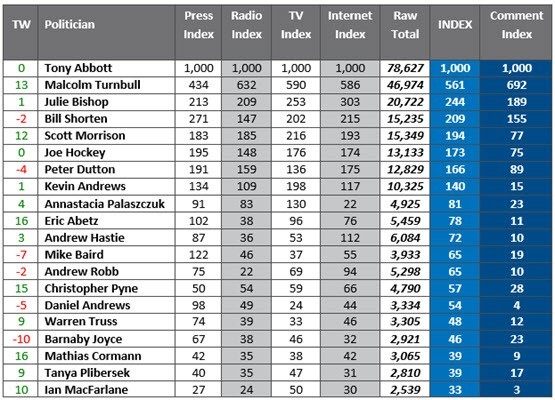 #libspill saw over 300,000 mentions in the last week, but I’m still all in for #LeeLinChinforPM. Record numbers across the board in any case — higher than Choppergate at its peak.

Julie Bishop was flying relatively under the radar on talkback as Malcolm Turnbull and Tony Abbott scored record numbers of mentions, with my personal favourite from 2GB: “the country’s already dead”.

And now to our other national sport, American football, where Hayne fumbled his first touch for the San Francisco 49ers on Tuesday. It’s alright, I’m sure he’ll… bounce back.