How playing favourites with media brought Abbott down

Abbott shunned a good deal of the media, but that proved to be the end of him. 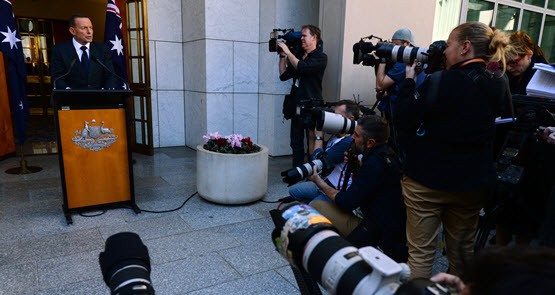 For all The Daily Telegraph pushed Tony Abbott into office, if it weren’t for its story of a pending cabinet reshuffle last Friday, Abbott could well be Australia’s prime minister today.

As Abbott yesterday slammed the media for acting as the assassin’s knife in leadership contests by reporting anonymous diatribes without considering the motivation of those making them, some media outlets have responded by saying Abbott and his office never returned their calls to talk substantive policy.

SBS chief political correspondent Catherine McGrath, for example, wrote last night that SBS and NITV had tried many a time to speak to Abbott about policy issues, but had been denied:

“Here was a media outlet that wanted to discuss policy with him and we were rebuffed, ignored and not given any opportunities for sit-down interviews at all …

“In my opinion they spent too much time playing to their favourite outlets — Sky TV, Channel 9 and The Daily Telegraph. All other media would get less attention, and SBS being smaller got almost no attention at all. For SBS viewers that meant they didn’t get a chance to hear directly from their Prime Minister on any issues this year, or really since he came to office.”

Fairfax’s Mark Kenny made a similar point, saying that Abbott’s remarks (particularly, presumably, about how he had personally never backgrounded a journalist) “blithely ignor[ed] his own office’s widely remarked partnership with certain docile media outlets”.

From the time he was opposition leader to the two years of his prime ministership, Abbott made a point of avoiding or ignoring many of the nation’s most serious and rigourous long-form interview shows, which allow a sustained line of questioning by a journalist in a way a press conference, for example, does not. He made only eight appearances on 7.30, only one on Insiders, and very few to ABC radio shows. He never appeared on Q&A, and famously if briefly banned his front-benchers from doing so over the Zaky Mallah saga.

Abbott favoured getting his message out through outlets like the News Corp tabloids and talkback radio — a tactic, Howard media adviser Paula Matthewson notes, that isn’t by any means new.

“It was John Howard who pioneered the practice of communicating directly through talkback radio with ‘everyday voters’,” she told Crikey this morning. “He did this because the press gallery were generally not particularly receptive to him, and because this form of retail communication meant he could get his messages out without them being filtered by the gallery.”

But this approach has its weaknesses. The closeness, perceived or otherwise, between Abbott’s office and The Daily Telegraph meant that when that paper published news of the rumoured cabinet reshuffle on Friday, it electrified the cabinet and put urgency and weight behind moves to depose Abbott for Turnbull. “It was interpreted to have come from the PMO, and sent the ministry into meltdown,” Matthewson said.

Abbott’s reluctance to engage with and speak to what he perceived as a hostile media was set in place long before he became prime minister. In the lead-up to the last election, the ABC’s flagship hosts took to calling out Tony Abbott for not appearing on their programs. Tony Jones, Leigh Sales and Emma Alberici all took the highly unusual step of telling their viewers Abbott hadn’t been returning their standing invitations to appear.  The 2013 election took place in September, but it wasn’t until November that Abbott made his first appearance on 7.30.

In the early months of his prime ministership, Abbott did very little media of any kind. It was his attempt to slow down the media cycle and to get out of being beholden to it in the way his predecessors had been.

As Errol Simper pointed out in The Australian on Monday, there is value in limiting media appearances. “You don’t want to devalue prime ministerial office in becoming a predictable de facto television celebrity,” he wrote. “On the other hand, 7.30 has a demographic that you can’t blithely ignore. Viewers might conclude, from your perpetual absence, that you just don’t like them.”

A fuller, more complex message to voters was one of the things Turnbull promised in his pitch to his party-room on Monday. He said he would get away from slogans and treat the public with intelligence — he promised to persuade. Abbott’s failure underscores the fact that for a prime minister, being a good communicator is crucial.

“It’s not enough to be surrounded by good communicators, the leader must be one too,” Matthewson said.

“The most basic problem for Abbott was that when he was subjected to any scrutiny in an interview, he got sloppy and tended to go off-script. So his strategists equipped him with a bunch of fail-safe slogans to which he stuck like glue. The best example of this was telling Leigh Sales that the government had stopped the boats when she asked him about economic credibility. I suspect Abbott was as terrified as his staff were of him straying from the slogans, because that’s when he got into trouble.”

A very fitting end to an extremely dodgy strategy…quite a legacy for a Rhodes scholar to leave, intellectually too lightweight to face serious interviews.

Abbott had large sections of the MSM championing him through thick and thin to the very end. It is characteristic that he turned on them with words of blame at the final hour. He walked from the stage completely alone.

Aswann, just as I saw him walk through the foyer of News Ltd. one evening after he took over from Turnbull. Completely alone! It has always struck me since that day that he was alone and a loner.

I think it was that moment in the Leigh Sales interview where Turnbull turned to Lucy and said, right, that’s it!