Hockeynomics: the tale of the tape

Joe Hockey's time as Treasurer was terrible by the standards he applied to Labor, but not without some positives, Bernard Keane and Glenn Dyer write. 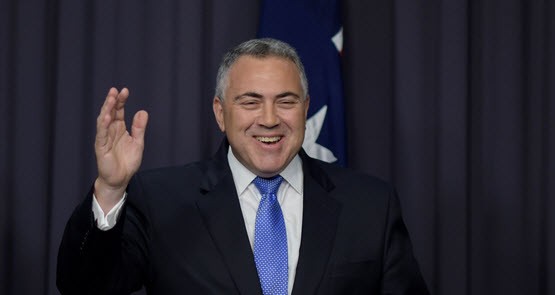 “We will deliver a surplus in our first year and every year after that.’’ Joe Hockey, Jan 2013

Joe Hockey of course never delivered a budget surplus. On current, optimistic forecasts, he would have had to remain Treasurer for another five years before a surplus was in sight. In the Pre-Election Economic and Fiscal Outlook published by Finance and Treasury prior to the 2013 election forecast, total deficits over 2013-17 were forecast to be $54.6 billion, with a return to surplus by 2016-17, and net debt peaking at 12.7% of GDP this year. In contrast, this year’s budget showed a deficit of $48.5 billion in 2013-14 alone and over $40 billion in the Coalition’s first full financial year, 2014-15, with no return to surplus until 2020 at the earliest. Net debt is now forecast to peak at 18% of GDP.

Hockey of course has been the victim of declining commodity prices. The national accounts show our terms of trade falling from 99 in the September 2013 quarter to 83.2 in the June quarter this year — a drop of nearly 16% (and over 36% in the last four years, lest you think Wayne Swan didn’t have a similar problem. It is only in 2015 that the Australian dollar’s value has started falling to catch up with the slide in our terms of trade, but Hockey has been luckier than Swan on that score: the dollar was at US$0.93 at the election; now it’s at US$0.71, a far cry from the above-parity currency of the Labor years.

But more to the point, it was Hockey and Abbott who crafted an entire economic narrative around profligate Labor spending and indiscipline. Who said there was a budget emergency? Who said Labor was wasting public money (while opposing Swan’s spending cuts)? Who made the budget deficit the be-all and end-all of economic management? Hockey and Abbott established the deficit as the standard by which Labor should be judged. And so should they be judged by that standard, and it’s one they failed miserably on.

But the budget obviously isn’t the whole economic story. Despite the constant claims that they’d inherited a smoking ruin, Hockey actually began his treasurership with two quarters of 0.9% growth (Hockey got another one of those, first quarter this year). But that growth wasn’t sustained, despite two 25-point rate cuts by the Reserve Bank: growth slipped to around 0.5% a quarter after the 2014 budget; by the middle of this year, the RBA was openly discussing whether we would have to accept sub-3% growth as the new normal for the Australian economy.

Fortunately, this overall tepid rate of growth had only a limited impact on employment: total employment is up over 300,000 — although most of those new jobs were part-time jobs, and that’s less than the actual growth of the workforce since September 2013, which is nearly 400,000. Unemployment has thus risen from 5.6% to 6.2%, but given the level of growth is an excellent outcome (and partly explains the dominance of part-time jobs), reflecting how weak wages growth has helped to maintain employment, demonstrating the flexibility of the workplace relations system Hockey inherited from Labor (something the government has refused to ever concede). And under Hockey, we also saw the steady fall in participation under Labor halt and reverse — after dropping to 64.7% in 2013 it’s now back to 65%.

But it was Hockey’s fate to have an incompetent, hyper-partisan prime minister permanently looking over his shoulder. It was Abbott’s nasty, vindictive decision to sack a trio of departmental heads, including the respected head of Treasury Martin Parkinson, after the election — though Hockey and Abbott were forced to keep Parkinson on through until the G-20 meeting in Brisbane last November. After abandoning Labor’s plans to partially address superannuation tax changes, Hockey warmed to the idea and got Treasury to start working on options, encouraged by Labor putting forward proposals: that work was shut down quick-smart by a desperate Abbott. Mortified at the collapse of the government’s political fortunes in Victoria and South Australia, money was thrown after the departing motor vehicle industry after Hockey made a political point of shutting down the fiscal spigot to Detroit and Tokyo. The response to the Murray financial services inquiry (which Hockey had promised in opposition, and it yielded a very good report) was delayed and delayed — except for the one recommendation the big banks liked, and which Hockey opposed, to dump the bank deposit insurance levy; also delayed was the response to the Harper competition review, because of splits over a proposed effects test.

But more than that, Hockey was his own worst enemy. It was Hockey’s idea to give a wholly unnecessary $8.8 billion capital injection to the Reserve Bank in October 2013 after he returned from his first foreign foray as treasurer for the autumn meetings of the International Monetary Fund and the World Bank in near-hysterics about the global economy. In retrospect, Hockey’s remarkable “the sky is falling” act on his return back then was a pointer to what would turn out to be a defining characteristic of his time as treasurer, a penchant for gaffes. A treasurer is supposed to be a figure of reassurance for markets and voters, someone who projects the impression of control and solidity. Hockey’s repeated slip-ups helped undermine both business and consumer confidence, especially after the disastrous 2014 budget, which coincided with, and contributed to, the vanishing of the strong growth of the end of 2013 and early 2014.

As the government’s fortunes declined, its exact message on the economy became confused. The budget emergency rhetoric was dumped as it became clear there would be no return to surplus any time soon. But nothing ever replaced it except endless hype about “free” trade agreements that would have marginal impacts on growth and employment. What Hockey would never say was that, in abandoning his quest for surplus, he had made the sensible call of avoiding the austerity budgeting that has crueled European growth for so long. An ideologue hell-bent on getting back to surplus would have smashed the economy into a wall. Hockey was smart enough to avoid that, but he ended up being a prisoner of his own — and his prime minister’s — increasingly ineffectual rhetoric.

“On current, optimistic forecasts, he would have had to remain Treasurer for another five years before a surplus was in sight”

Optimistic! I’m thinking of indicting you both for cruel and unusual punishment of a word.

Heroic would have been better.

Hockey had no idea, and Abbott had less than that. No surprise that confidence fell while these dullards were in charge. You would not credit two more clueless individuals getting to high office.

Thanks Kevin, thanks right wing nutters in the liberal party.

Swan had much worse to deal with, and did it much better, and for the GFC, better than anyone in the world.

Hockey, a fool led by rAbbott an even bigger fool. At least Wayne Swan can have a good laugh as to how this LNP government fooled the electorate and business alike with their non existent fiscal and economic policies. As to where we stand now, …recession anyone?

Given the relief, not to mention glee, that the Abbottrocity is out (he hasn’t even had the guts to take his back bench seat yet – Krudd, Gillar & even Bronny did but not big brave Abbottrocious)I’m surprised that Leventy has thus far seemed to be ignored – at least as incompetent as his boss.