Turnbull’s rise to PM is nothing to be proud of

Crikey readers discuss the Liberal Party leadership spill and other issues of the day.

Tim Stephens writes: Re. “It’s on” (yesterday). Great night on telly. ABC ratings will be through the roof. The Libs have finally taken the step to ditch the worst PM in Australian history. I do wonder at what those 44 hard righters who voted for Abbott are going to do with a moderate Turnbull. Will they finally embrace climate change, will they treat the Australian population as adults (now the adults are really back in charge?) and allow an informed debate on the important issues, will we get our arses out of the Middle East? One thing is for sure, a certain leader of the ALP, (Bowels Scrotum?) will have a brown streak in his undies. He has done bugger all for two years as Abbott imploded and is as popular as a road crash. Maybe he should do the right thing and stand down so someone with charisma and ability can lead an effective opposition. Maybe then Australia will get real leadership and some effective solutions to our developing issues. It’s going to be a fun ride to the next election!

Adrian Jackson (Liberal member 1994-2003) writes: With Malcolm Turnbull successful in the Liberal leadership ballot we need to see the Liberal party return to sane “small l” liberal values. The extreme right, including the fundamentalist religious right, has no place in modern Liberalism. Ministers should be allowed to make important statements on their portfolios rather that the PM trying to be a jack of all trades but master of none. The Liberals (and Labor too) need to concentrate on Australia and our region instead of war in far away regions that we can not have any real impact on nor need to have.

John Richardson writes: Re.”Why our politics is so terrible — and how to fix the system” (yesterday). The sad truth is that, like so many of the pundits who are everywhere these days, Crikey appears to have overlooked the simple fact that there is no-one on either side of the political landscape capable of building a meaningful dialogue with the Australian people but, more importantly, there is no-one who is even the slightest bit interested in trying to do so.

That more than 20% of the primary votes cast in the last federal election went to candidates from other than the major parties is clearly evidence enough that the electorate is disenchanted with the shallowness of the political menu on offer. More & more Australians everyday are waking-up to the fact that they are being expected to choose between the lesser of two evils; neither of which remotely satisfies their needs or aspirations & which precisely explains the reason behind Jeremy Corbyn’s astounding rise in British politics, as well as why it doesn’t actually matter that Tony Abbott has gone. Poor fellow my country indeed.

Jock Webb writes: Re. “Scapegoats and cages” (yesterday).  The use of the cage in an ACT school represents defeat and despair. I have been in education for a quarter of a century and I have seen many very difficult situations where unpredictable students whose trigger issues are not quantifiable are a threat to the safety of their peers. Nothing eats at the soul of a teacher more than not being able to keep your students safe. The cage is a disgrace, but could have been avoided had the ACT education department had its act together. Too often we see children in mainstream classes who are not able to succeed. Sometimes they just cannot cope, but often it is the token support offered by officials to the school and the student that is the issue. You cannot “mainstream” children who endanger the safety of staff and students alike unless you have tagged support. Unfortunately, this is what is lacking in most integration programs. 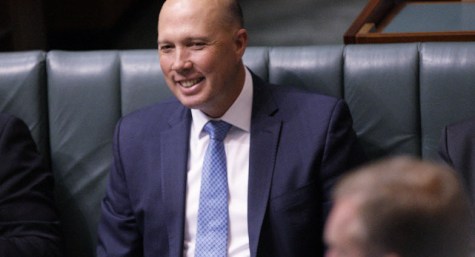 Is Dutton popular enough with voters to save the Coalition?