Turnbull: what has he learnt from his time in the wilderness?

If anyone in Parliament can address the problem of selling reform, it's Malcolm Turnbull. But he has some impediments that even Kevin Rudd didn't face. 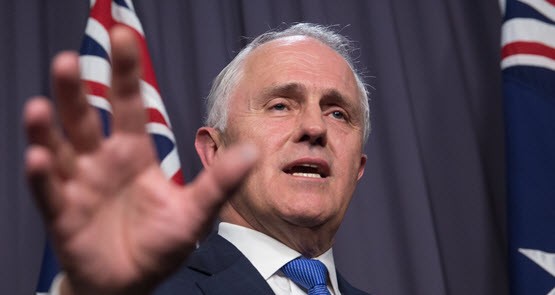 Malcolm Turnbull’s diagnosis of the problems besetting the Abbott government yesterday was acute and accurate — Tony Abbott was incapable of providing economic leadership and in particular incapable of explaining to voters the need for reform. Australia, he said, needed a government that “explains the challenges and how to seize the opportunities. A style of leadership that respects the peoples’ intelligence, that explains these complex issues, and then sets out the course of action we believe we should take, and makes a case for it. We need advocacy, not slogans.”

Whether Turnbull is capable of providing that explanation remains to be seen, but there are few, probably none, in Parliament who are more likely to achieve it. He laid out the process for doing so, in exactly the same way as he has before: explain the problem to voters, offer the facts, then propose a solution. It sounds simple, but it has proved beyond several governments now — Kevin Rudd and Julia Gillard struggled to do it, and Tony Abbott proved equally incapable. Turnbull’s contrast between advocacy and slogans is particularly pointed: Abbott relied almost entirely on slogans, usually ones beginning with “stop”, whereas Turnbull in a former life was a successful barrister. Lawyers don’t necessarily make the best communicators — consider the bloviating bore Brandis — but Turnbull has always as a politician spoken in a way that assumes his audience and interlocutors are intelligent, rather than mindless vessels waiting to be filled with the day’s talking points.

Turnbull’s other emphasis last night was on consultation and proper process. This wasn’t merely a poke at Abbott, master of the captain’s picks, the briefing of The Daily Telegraph before cabinet and the cabinet meetings with no agenda items, but an attempt to assure colleagues Malcolm 2.0 will be a significant upgrade from the model that drove colleagues wild with its user-unfriendliness in 2009. Turnbull in his first stint as opposition alienated and infuriated colleagues with his dismissiveness and arrogance, an approach that undermined his support well before the party tore itself apart over climate change. Like Rudd, who after returning to the prime ministership was in a rush to let colleagues know he’d be a far more consultative leader, Turnbull is sending the signal that this time it will be different.

One of Rudd’s problems was that during his 16 months on the backbench he failed to use the time to put together a coherent policy plan (beyond moving to an emissions trading scheme) to present when he returned to the prime ministership — as rapidly became clear during the election campaign, when he began producing thought bubbles about northern Australia and moving Garden Island. Turnbull faces a similar challenge of demonstrating a coherent policy agenda, particularly heading into an election year. It’s not for want of reviews, reports and white papers — there’s the Murray Inquiry review response (purportedly on the verge of being released by Hockey today until events intervened), the Harper review response, a defence white paper, the tax reform process all but abandoned by Abbott, and even a comatose federation reform process if he’s particularly ambitious.

The tension here, though, is plain: Turnbull has to be different from Abbott in policy as well as presentation, but not different in ways that will further alienate conservatives or the elderly reactionaries who form the party base. He has already ruled out changes on climate action, so we’re stuck with Greg Hunt’s execrable Direct Inaction policy and Abbott’s miserable emissions reduction targets. That doesn’t rule out an embrace of renewable energy via government funding or further regulation, of course — which voters love — but it does rule out an emissions trading scheme, meaning the next election may well be fought by Labor on an emissions trading policy that everyone knows Turnbull at heart supports.

One problem Turnbull faces that Rudd didn’t was that his opponents will remain behind him in the party room. When Rudd returned to the leadership, Gillard and a number of ministers left politics altogether (Wayne Swan and Stephen Conroy went to the backbench). Rudd had a reasonably united party, even if he had little idea what to do with it. Turnbull, however, will have disgruntled Abbott supporters and presumably Abbott himself, as well as Joe Hockey, on the backbench, a lightning rod for discontent, waiting for Turnbull to stumble. And no one governs without stumbling occasionally.

Still, none of that is anything some good polls can’t put right. And in that context, Turnbull is fortunate. Until now, Bill Shorten has been a lucky opposition leader for having a PM as woeful as Abbott to compete against. Now Turnbull will be lucky one, because he’ll have Shorten to compete against. And it’s unlikely to be pretty for Labor.

Above all, Turnbull has been given something that is increasingly rare in politics — a second chance. His period away from the leadership — including stints on the backbench in opposition and then as shadow minister and minister — is nearly as long as John Howard’s near-six years in the wilderness between 1989 and 1995. Howard proved far more successful second time around. Perhaps Turnbull will as well.

As BK opined, lawyers love the sound of their own voice too much.
Bullturn’s first PMQ is not going well as he can’t seem to drop the magisterial superiority dripping from his verbiage.

“Snake-oil anyone? A free Utegate and an ARC voucher with every bottle.”

At least Turnbull has survived (and excelled) in the real world, or would you prefer another political staffer or union boss …..?

An olive branch from Kevin Andrews was a positive start. If Andrews can manage all but the hottest of heads there is clearly a place for him in the broader church.

What is the obsession leaders have with pleasing the Liberal Party’s “base”? We have compulsory voting, so they can’t stay home and they’re unlikely to vote for someone else. Turnbull should try to break out of this straitjacket and propose some policy changes that would benefit the wider community. Abbott’s inability to do so was one of his great weaknesses.