The latest tips and rumours in the wash-up from last night's bloodletting.

When life gets in the way. While in the Crikey bunker our best-laid plans flew out the window as soon as it was obvious it was on, we know that not everyone has that luxury — sometimes life gets in the way of keeping up to date with what is going on in Canberra. As one of our tipsters told us, the theatre set in Sydney last night were mighty distracted:

“Went to see the Sydney Theatre Company’s production of The Present last night. It’s a very long play but started at 6.30pm because it was Monday night. Luckily, as it’s a Chekhov, and two guns had been produced in the first scene, we knew that it would end with a bang. At 9pm, as Cate Blanchett cradled a dying Richard Roxburgh in her arms, you sensed at least half the audience reaching for their mobile phones. By 9.10 most of us were on the pavement, frantically scrolling through Twitter. Heard the news in the car on the way home — thank you ABC Radio. I ran into one of the actors in my local caff this morning and told him that we’d all rushed out to look at our phones. ‘So did we’ he said.”

Is this the time to say, “all the world’s a stage, and all the men and women only players/ they have their exits and their entrances, And one man in his time plays many parts”?

Does size really matter? Twitter was alight last night with arguments over where Tony Abbott sat in the list of longest- and shortest-serving prime ministers. According to this great graphic from The Guardian, Abbott sits below both Julia Gillard and and Kevin Rudd, and above Harold Holt, William McMahon and Joseph Cook. 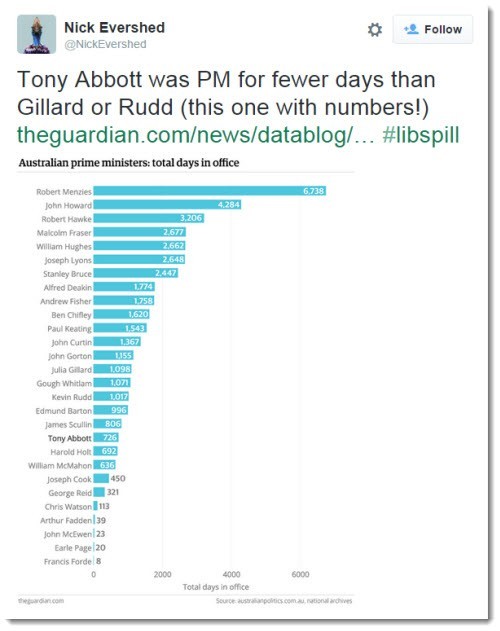 Labor ready to cash in. We had a little chuckle yesterday as the Liberal leadership spill was called to receive an email from Labor Party HQ. “Will you make these Abbott’s last days?” imploed the subject line from national campaign director George Wright, as it looked increasingly likely that donations to the ALP would have nothing to do with Abbott’s fate. Just seven hours later Labor supporters received another email from Wright, this time readers were told “nothing has changed” with the new PM. Seems like the ALP can’t make up its minds — they’re asking for an end an Abbott prime ministership and as soon it happens they say it doesn’t matter anyway.

The view from the top. Malcolm Turnbull is the first Australian prime minister for whom the view from Kirribilli will be second rate. His waterfront home in Point Piper has a superior view back up the harbour. Billy McMahon had a view from the heights of Bellevue Hill, but nowhere near the waters of the harbour. This view from Fairfax Media’s Domain of the Turnbull house at Point Piper shows you just what it means when a “rich dude” (in the words of the NT News) becomes prime minister: 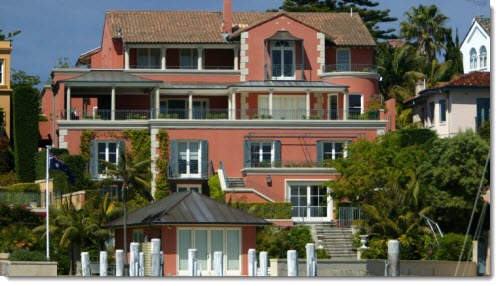 Cancelled events. Once the spill was called yesterday, plans throughout Parliament House were dropped. A number of events have been cancelled yesterday and today, with a screening of Living in The Age of Airplanes organised by Qantas quickly finding itself on the scrapheap as its organisers realised no one from the government would be turning up. We also understand that Treasurer (for now) Joe Hockey and Assistant Treasurer (for now) Josh Frydenberg were due to release the government’s response to the Murray Inquiry into financial systems today, but of course, governing is off the table until the new leadership is officially in place.

Spill and chill? The morning after the night before means the shit-stirring has started at Australia’s uber-competitive TV networks. So, who did the spill better? Former long-standing Melbourne news director Steve Carey (he left in 2013) took a swing at his former network on Twitter …

A Crikey tipster, meanwhile, noted the “stunning” air time given to Seven board director Jeff Kennett to mouth off Turnbull, which happened again on Sunrise this morning (in Seven’s defence, pretty much everyone carried Kennett’s views on the matter at some point, given he was all too happy to give them). The change in government could have big implications for Seven — Tony Abbott was seen as a firm supporter of the network’s position on the reach rule (it wants it kept as is), while Turnbull is seen as more predisposed to a change, despite his personal friendship with Seven exec Bruce McWilliam.

Other tipsters point to Channel Nine’s failings towards the end of the night — as Seven cut into the Turnbull-Bishop news conference, Channel Nine was still airing Footy Classified.

While we’re rounding up the point-scoring, it’s worth noting Sky’s David Speers and Kieran Gilbert were working till late last night, and they started again at 5am this morning, which is impressive in itself. We’re hoping the coffee is free-flowing in the Sky studio.

Caged and gagged. The story of an autistic student who was restrained in a cage by his school and the subsequent sacking of the principal has captured local politics in the ACT, with Education Minister Joy Burch saying: “It is completely unacceptable that a decision was taken to build this type of structure to respond to the behaviour of a student.” Information around the story has been closely guarded, the school hasn’t been identified to protect the identity of the student, and Burch was highly critical of news outlets that published pictures of the cage last week. Now we hear from a tipster that teachers across the territory have been gagged on the issue:

“Last Thursday morning, principals from all ACT public schools were called for a meeting with the DG and given strict instructions to direct staff not to discuss with anyone the use of the cage for an autistic boy at an ACT public school. After months of hiding what had happened, including not telling the school community itself about even the existence of the cage the Gov and Dept has now sunk to banning any discussion of the issue at all.”

We asked the ACT education department why staff were told not to talk, and were told by a spokesperson:

“Principals were not told that they could not discuss the issue of an inappropriate structure in an ACT school. Conversely, staff have been asked to raise any concerns with senior staff members should they have them, and principals have also been encouraged to contact their school communities and provide contact details should parents and community members wish to discuss any concerns. All staff are regularly reminded of confidentiality and privacy obligations, especially in regards to the personal details of students. Principals were asked to remind staff of these obligations.”

Will Abbott’s daughter be moving out then?

News this morning that Abbott delayed his farewell speech on Monday night to beg Margie & daughter/s to come down to stand with him.
No show so he had to do it alone, as he probably will the rest of his life.
With no pretense for politics sake to maintain any longer, when will their separation become official?