Tony Abbott's loss of the prime ministership after just two years was the result of the relentless negativity that marked his political style as leader. 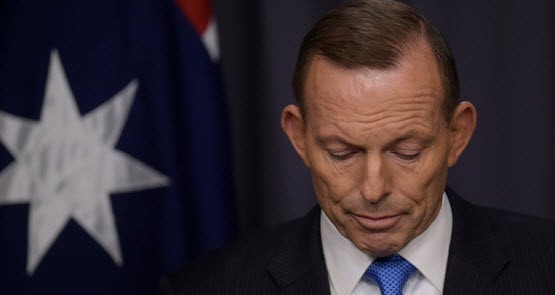 It’s almost impossible to overstate how bad a leader Tony Abbott was, because he had the lot. He had a united party. He had a landslide election win. He had a nation desperate for an end to the ridiculous Rudd-Gillard soap opera. He even had the goodwill of the electorate despite never having been popular with voters — he had a 46%-35% approval rating a month into his prime ministership. He had a strengthening economy that yielded successive quarters of 0.9% growth at the end of 2013 and the beginning of 2014. He had the enthusiastic support of News Corp (which had been implacably hostile to Labor) and the shock jocks.

And he screwed it up. Screwed it up so badly he was ousted well short of the period Kevin Rudd and Julia Gillard lasted as prime ministers. Kevin Rudd used to be the exemplar of good opposition leaders who made bad prime ministers. Well, Rudd’s got nothing on Abbott now. At least Rudd lasted more than two years. No wonder Abbott refused to give a media conference last night, and was still hiding from the media this morning. Failing to last even as long as the two Labor leaders he despised will haunt him for the rest of his life.

A long time ago, I suggested the key to Abbott’s success as opposition leader was his complete lack of interest in facts and consistency. The only thing that mattered to him was constant attack, regardless of the intellectual substance of his argument, regardless of whether he had previously argued the exact opposite; he was a man unshackled by the chains that bind mere mortals, such as truth. He was on course to become our first postmodern prime minister, and in due course that was what he became.

Problem is, he never understood that his role changed when he won in September 2013, or if he understood, he didn’t want to acknowledge it. A prime minister can’t be the national attack dog, can’t simply say whatever suits his political purpose, can’t just make shit up, which is what Abbott so often did. His words carry weight — with his colleagues, with voters, with business, with markets. A PM is expected to be more than a partisan leader — they must be a national leader.

But as many pointed out, Abbott saw the role as a kind of super opposition leader, dedicated to stopping, tearing down, repealing and saying no to things others achieved or supported. A carbon price, a mining tax, same-sex marriage, refugees, education funding reform — the answer from Abbott was always “no”. That awful interview on 7.30 last week was the ultimate encapsulation of Abbott as prime minister — asked about the economy, he instinctively responded that he’d stopped the boats. And it had an absurdist sequel yesterday when, in response to Malcolm Turnbull’s challenge that “We need advocacy, not slogans. We need to respect the intelligence of the Australian people,” Abbott responded a couple of hours later, yet again, with “we’ve stopped the boats.”

The lesson in all this — one for Labor as well — is that how you communicate matters, beyond the obvious sense. Under Abbott and his fact-free approach of relentless aggression in opposition, the Liberals deskilled themselves. They lost the capacity to effectively explain policies, partly because actual positive policies were few and far between with Abbott (his paid parental leave scheme was one, and loathed by his party), but partly because explaining wasn’t the Abbott way. Abbott attacked, he mocked, he insulted, he predicted doom and gloom, but he wasn’t interested in explaining, and eventually he was unable to do it when his job changed and voters looked to him to explain how, and to where, he wanted to lead the country.

Normally you develop policy and then work out how to communicate it. The charge against Labor in the Gillard years was that the focus groups they used to work out communication strategies ended up dictating policy. In Abbott’s case, the communication was the policy: nope, nope, nope, stop, repeal, remove — always delivered with Abbott’s trademark aggression, from the man who boasted to his party room how good he was at fighting Labor, when you might expect a prime minister to boast of how well he led the country.

So what’s Abbott’s legacy? Well, not nothing. Rather, it’s a negative legacy. A functional, effective carbon pricing scheme dumped. A mining tax repealed. Same sex marriage delayed. Civil liberties curbed further. Transparency of government curbed. And plenty of economic negatives: a budget deficit grown significantly worse. A planned reduction in superannuation tax concessions abandoned. Unemployment higher. Growth lower. A malaise of consumer and business sentiment. The one worthwhile achievement of his government is also a negative: he stopped the boats. There were no more drownings of asylum seekers trying to reach Australia. But it was achieved at a terrible and unnecessary cost: the establishment of brutal offshore detention camps in which rape, child abuse and murder occurred with zero accountability for those charged with the care of detainees. And that’s still going on right now.

Beyond that, Abbott damaged the polity in a more nebulous but equally noticeable way. Political and policy debate became, after 2009, poorer, nastier, more febrile. The vilification heaped on Julia Gillard, with Abbott’s tacit support, was extraordinary. The campaign against a carbon price was marked by the most absurd overstatement and an apparent disgust for actual evidence. And Abbott’s willingness to abandon many of his election promises after he became Prime Minister — a willingness so at odds with his insistence that he would provide mature, no-surprises government — left voters angry.

Abbott and the economy: best of enemies

Ooops, that should be ‘hear hear!!!’
But you get my drift (blames spellchecker)

Brilliant summation of Abbott’s trashing of this country. His parting statement was a typical rehashing of his pathetic ‘achievements’ and the swipe at his own party and the media showed his lack of any humility and capacity for introspection. Above all, he always blamed others.

Jeepers, Bernard, how recently was it you awarded Abbott Politician of the Year? Some of us haven’t forgotten.