The 10 worst moments of Tony Abbott

Was it the patronising misogyny face? The onion? The constant references to the Nazis? Here's how Tony came undone. 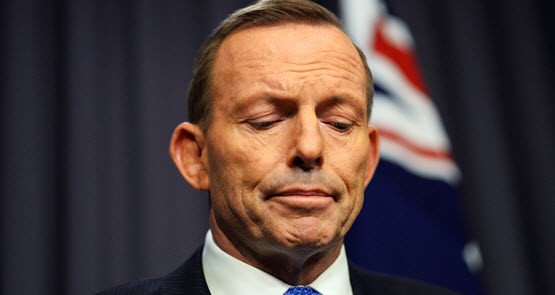 And today, it is all felicitation to Malcolm Turnbull and the crack campaign team that came up with the “advocacy not slogans” slogan that was sufficient to win a party room. Tan, lean and more expensively groomed than any non-French statesman has any business being, the new Prime Minister will spend the next several days celebrating in the only way he knows how. Which is pompously Mal-splaining his “consultative” vision for the future at day-long press conferences and getting really cross when focus groups return the request to “please stop sounding so fancy” and “lose the Windsor knot”.

But, even as this well-dressed devil poses as an angel of reason and light, we should spare a thought for the darkness in which the nation’s greatest boat-stopper finds himself. Poor Tony, who will be remembered for his enormous deficit. Poor Tony, who will be remembered as the shortest-serving prime minister since William McMahon. Poor Tony, whose self-appointment as a friend to women — to be fair, he never actually dared call himself the Minister for Women — remains the most inappropriate casting decision since Mickey Rooney in Breakfast at Tiffany’s.

It is in this effort to remember the good times and do away with the bad that we pause to remember the former prime minister’s 10 finest media moments as they played out before and within his all-too-brief term. You are welcome and, indeed, encouraged, to add to this record of merit. After all, as Abbott’s successor might say, we must embrace the wisdom of the crowd! Well, right up until that proximate date Mal’s approval ratings take a plunge.

Abbott’s first appearance as a champion-league sexist did not occur in office, but its countenance was so singular, it would haunt him throughout his term. When then-PM Gillard delivered her well regarded “misogyny” speech, Abbott was unable to settle upon an expression that showed the mix of humility and a sporting nature a previous Liberal opposition was able to muster seated across the floor from Keating. Instead, his features took on an arrangement with which any woman who has ever left the house has miserable familiarity. It says: “Look here, little lady. You’re really testing my patience,” and it would translate to a long battle with the female vote.

Another pre-PM blast that would blight Abbott’s future came in 2007 after his refusal to meet with asbestosis victim and advocate on behalf of those afflicted by James Hardie Industries products Bernie Banton. Banton called the then-minister for health a “gutless creep”, as a man so close to death is surely entitled to do. In reply, Abbott said that the activist might have been sick but was not by necessity “pure of heart”. You can think this stuff, but you do not say it in public office, and that history permitted this inelegance led Abbott to believe that Australians just loved his candour.

It is not my personal view that Abbott’s comments about the battle that claimed the life of Lance Corporal Jared MacKinney in Afghanistan were especially Tone-deaf. In fact, MacKinney’s widow, Beckie, reportedly had no problem with the weakly articulated condolence “Shit happens”, and I suspect many Australians had none, either. It was intended as an ontological shrug — “who among us can explain life and death?” — but it was reported as a gaffe. Either way, this casual-Friday kindness made in opposition primed him to become a figure perceived as useless in the Middle East as he was in eulogy.

7. Sympathy for the devil

Abbott was so eager to depict Islamic State as the worst threat ever to humankind, he committed a textbook Godwin. “I mean, the Nazis did terrible evil but they had a sufficient sense of shame to try to hide it,” he said to a nation that he had not, despite his best efforts, managed to whip up into such a froth of loathing that they forgot what they learned in school: the gravest shame of the Nazis was precisely that they tried to hide it, and succeeded in hiding it for too long. This last blunder happened to coincide in the news cycle with pictures of the drowned Syrian toddler Aylan Kurdi, which turned up, for many, an evidence of a shame the West could no longer hide. For a man who had gone to so much costly effort to hide his own shame at Manus and Nauru, this was an incongruous statement. (It also struck me that if he was such a fan of organisations that “tried to hide” things, he could have spared us the $80 million wasted at the trade union royal commission and simply congratulated the nation’s handful of mildly corrupt officials for not flaunting their wealth as gaudily as our business leaders and former champions of WorkChoices.)

This previous comparison was preceded in February by Abbott’s assertion that Labor had enacted a “holocaust of jobs” in, of all places, the defence industry. Let’s set aside that youth and long-term unemployment has grown under Abbott and just wonder for a minute what leads a public figure to reference the worst moment of Western history so often. This is a man for whom a diagnosis of binary thinking seems a bit too nuanced.

Tedious accounts of these incidents speak more adversely of local commentators than of the former PM himself. Who gives a rat’s if his tastebuds are shot and why, in the name of all that is news, is one man’s wink worse than another man’s raised eyebrow? It is rarely that I am given to form the sentence “Andrew Bolt has a point”, but in the case of Abbott’s supposed prurience before ABC radio host Jon Faine, Bolt really did. That these meaningless moments stood in for a “scandal” that unfolded in everyday policy, and will continue to unfold under Turnbull, is disgraceful and just the sort of thing that happens in a listicle-driven … oh, oops.

Although not widely critiqued by media otherwise occupied with the bigger business of wars, dead bodies and spills, the Ice Destroys Lives government campaign was destined to do little social good and so, a great deal of political harm. Methamphetamine, to be clear, does destroy lives, as anyone familiar with its regular abuse will know. But as users and those intimate with them also know, a piss-weak “don’t do it” advertising campaign launched by Abbott this year and taken straight from 2007 (by way of Nancy Reagan) will not make a dent and was never intended to make a dent in anything but polling. With youth jobless rates approaching hopelessness and methamphetamine abuse rising in concert, it doesn’t take a cynical statistician to know that this was self-interested bullshit. This was a slap in the face to families already bruised.

Abbott rarely had the “shame” to “try to hide” his ideology, and never was it so stripped bare as when he described residents of remote Aboriginal communities as entirely responsible for their own lack of everything. The “lifestyle choices” remark fails contemporary liberal political standards, which tend far more subtly to blame the private individual for getting screwed by public policy. A shift in tactics for the Northern Territory is unlikely under Turnbull — nothing changed under Rudd-Gillard-Rudd, whose shame on indigenous policy was partially concealed by an emotional apology. But Turnbull’s shame is that he will hide the effects of this identically inert policy with absolute style.

In one of his other barely reported but deeply resonant policy snafus, Abbott initially elected not to approve the HPV vaccine Gardasil for subsidy by the PBS. This Australian innovation, which led, as predicted, to a dramatic decrease in those high-grade abnormalities that precede cervical cancer, was not treated by the then-health minister as a cost-effective preventive marvel for a very common virus. Instead he misread it as an indulgence. Actually, it would prevent 70% of all future cervical cancer and Abbott was either wilfully misreading medical reports on its effectiveness or being a moralising turd. Howard stepped in, after female MPs from all sides protested, and approved the subsidy. But many of us ladies were left with the profound impression that this man was prepared to put our poonannies at risk. The incident may be forgotten and winks and unfortunate faces may be seen as the reason for his unpopularity with female voters. But our true revulsion for him came from a muscle deep inside.

17 thoughts on “The 10 worst moments of Tony Abbott”