"Malcolm Turncoat" is the favourite pun of the News Corp tabloids this morning.

Last night’s leadership spill could not have been more badly timed for Australia’s major daily papers. But with one exception, all managed to get the result into their print editions this morning.

The exception was the The Australian Financial Review, whose final edition went to bed ahead of the final verdict but correctly hinted at the final outcome. “Tony Abbott has no one but himself to blame for the collapse of his prime ministership, a collapse so comprehensive and spectacular that it left open the possible return of Malcolm Turnbull — despite the hostility of the Coalition’s conservative wing,” wrote Laura Tingle in a front-page analysis piece. 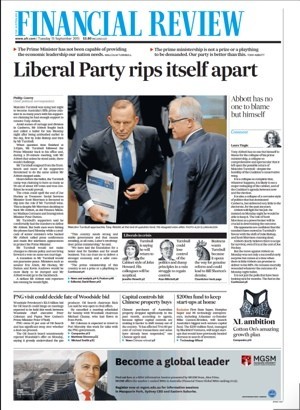 Stablemates The Sydney Morning Herald and The Age got the result into their final print editions, though they missed the final late-night Turnbull and Julie Bishop press conference. 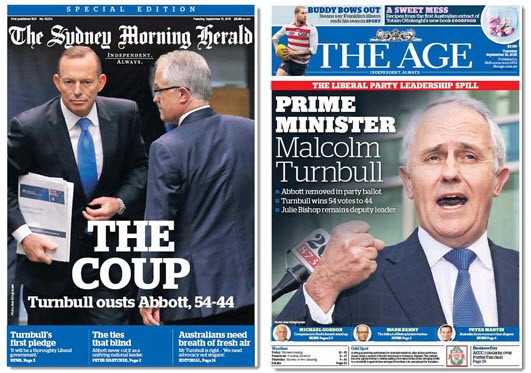 “It was about self-interest, pure and simple … His message could hardly have been more stark: if you want to keep your seat, you’ll think again,” began the leading analysis by Michael Gordon in The Age.

In The Sydney Morning Herald, the lead analysis was by Peter Hartcher, who stuck the boot in.

“Malcolm Turnbull’s prime ministership is a chance to unify Australia by leading from the Centre, something Tony Abbott was never able to achieve. Abbott wore a blue tie every day of his rule, the first time a prime minister has worn a partisan plaything as a permanent personal identification.”

The most circulated News Corp tabloids, which benefited from their later deadlines, gave prominence to a pun that may yet cause Turnbull some grief. “Malcolm Turncoat” appeared on pages 2-3 of The Daily Telegraph and the front page of the Herald Sun this morning. While the Tele was the paper perhaps most responsible for precipitating the spill with its piece predicting a cabinet reshuffle last Friday, which triggered the evaporation of support for Abbott, it wasn’t well disposed to the new PM this morning. “Tony Abbott’s leadership was lost in a contest of morality — on loyalty and treachery,” Simon Benson wrote. “Loyalty to Joe Hockey and treachery at the hands of Malcolm Turnbull.” 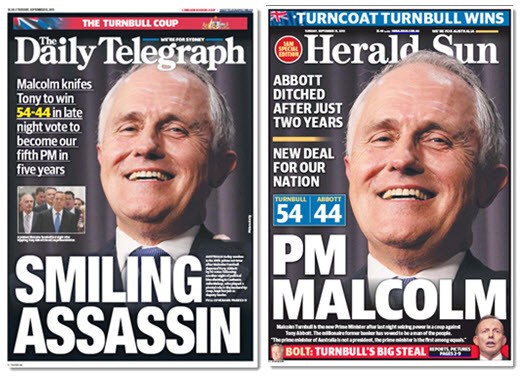 The NT News was the only major tabloid to make Turnbull share the front page. He got second billing to a local story on domestic violence sentencing. The West Australian, operating three hours behind the east coast states, featured an analysis by Andrew Probyn, who reminded readers of John Howard’s personal involvement in urging Turnbull to stay after he was deposed as opposition leader. Turnbull, Probyn wrote, was the Plan B — a plan that was put into place last night. The biggest loser now, he wrote, is Bill Shorten. 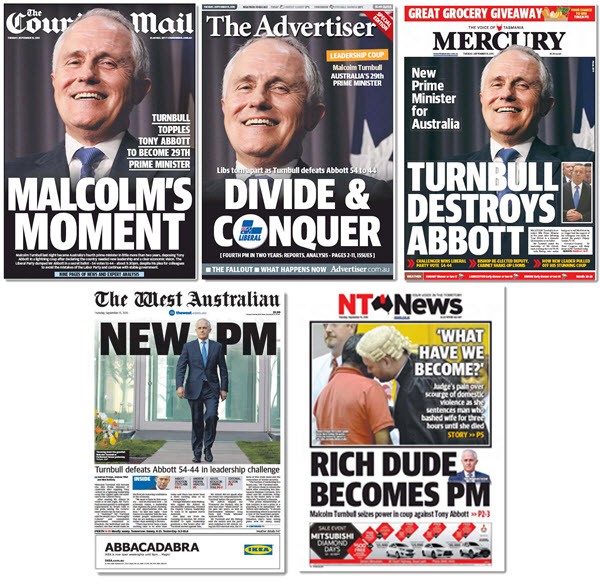 The Australian was far more circumspect, headlining page 1 with “Turnbull’s Triumph” and a far more positive coverage. Janet Albrechtsen wrote that Turnbull had more guts than Peter Costello and should have the support of his party. On the front page, Paul Kelly wrote that Malcolm Turnbull “has not won the heart of the Liberal Party but he has commanded its self-interest”. 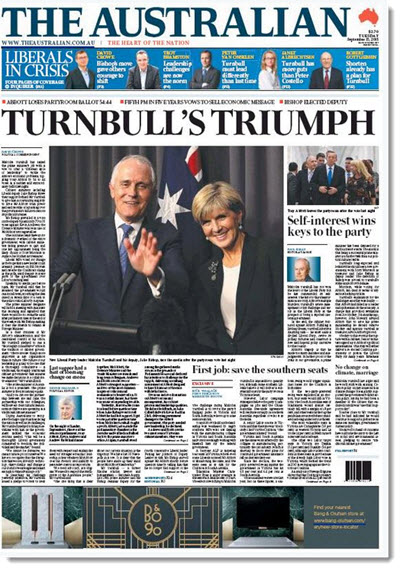 Labor has shot itself in the foot regarding loyalty: the second Turnbull’s disloyalty is mentioned, Shorten’s role in the removal of two Prime Ministers will be brought up.

I remain sick of it all.

[email protected]; Let’s also not forget the Bishop in this night of the long knives. She did not tell her leader of the conspiracy to save her own political hide and position on the winning side.
A smiling assassin on the front page of the Australian if there was ever one.

Lady Asbestos is not so much the Black Widow of Oz politics as the Widow-Maker, four & counting.
Thee Lord of Misrule has been felled by Harlequin who can now pursue his love of Goldman Columbine Sachs.