Australians have no idea how many refugees we take in each year, and they were equally unclear about the China-Australia Free Trade Agreement.

Voters were unchanged in their opinion of the government over the weekend (before last night’s dramatic events), and almost half of voters support extending airstrikes against Islamic State into Syria, according to this week’s Essential Report. Some 40% of voters said they would vote for the Liberals, remaining unchanged for three weeks, with the two-party preferred numbers remaining at 48-52% in favour of the ALP. Next week’s poll will give more insight in light of recent events.

When questioned on the economy, voters’ responses reflect the uncertainty that Prime Minister Malcolm Turnbull referenced when he explained why he was taking on Tony Abbott for the top job. While 28% of voters expected their job to be less secure in two years’ time, 59% of voters expected economic conditions in Australia to be worse in 12 months’ time, with 18% saying the economy would stay much the same, and just 16% believing it would get better. Among Coalition voters, 51% believed the economy would be in a worse position in 12 months’ time, up from 33% in September 2013. 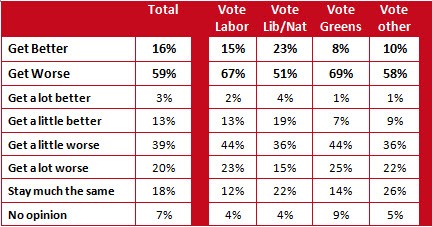 Almost half of voters support Australia extending its airstrikes against Islamic State targets to Syrian territory, with 48% of voters saying they were in favour of the move and 29% opposing the move. It was particularly popular with Coalition supporters, with 68% saying they support the move.