Is it time for a spill? The media say yes. Probably. Oh who the hell really knows ... 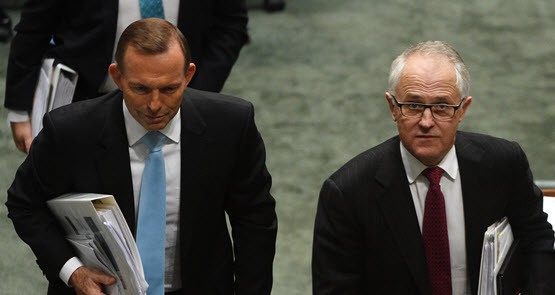 Will there be a Liberal Party spill or not? The press gallery’s leading pundits had a number of theories over the weekend …

Peter Hartcher in the Sydney Morning Herald says it’s most certainly on:

“It is the point in the cycle where MPs are discussing timing and tactics for a challenge, rather than whether one will materialise.

“Unless Abbott takes evasive action by calling an early election, whatever the details of the Canning outcome, it is most unlikely that he will make it the end of the year unchallenged.”

Malcolm Farr on news.com.au muses on the timing:

“The Canning by-election next Saturday and the coyness of any challengers so far are expected to delay a showdown with Mr Abbott.

“However, Parliament will not resume for three weeks — meaning Liberal MPs won’t be together again — after the coming weekend and rebels will consider acting decisively or lose momentum and opportunity.”

Phil Coorey in the AFR on how the poll in Canning fits into all of this:

“In recent days, the leadership issue has accelerated with talk now rife of a switch to Malcolm Turnbull as early as next week. Some are not discounting a move this week even before Canning.

“A Fairfax Media/Ipsos poll shows that if the election were held on the Saturday just gone, the government would have suffered a 10-percentage point swing to hold the seat by 52 per cent to 48 per cent.

“Liberal MPs say a swing of that magnitude on September 19 would be enough to precipitate a leadership spill.”

“You’ve seen a lot media overage, a lot of media hype over the past few days, the past few weeks, and I would be the first one to tell you if I thought this was just media excitement, people getting ahead of themselves. That is not the case — there is substance in this story. There are many people in the government who are talking, who are muttering, who are scheming. And not many of them know what is about to unfold.”

“However he handles this latest attack on his leadership, the Prime Minister cannot win because the destabilisation campaign is an end in itself: it inevitably will damage the Liberal vote in the by-election; it undermines his authority at a time when he was making positive headway over Syria; and calling out or sacking ministers thought to be responsible will only be taking the bait and bringing on a leadership challenge his enemies consider inevitable.”

Laurie Oakes on Channel Nine News revealed Turnbull had been approached to rule himself out of the running, and had refused, citing a policy not to give the issue oxygen by talking about it:

“Odds are against a move before the by-election, but it’s being discussed because after Canning, Abbott might call a snap double-disolution election to head off any challenge, and that, some of his senior colleagues fear, would be political suicide for the government”

“Turnbull camp sources have confirmed a report by the Nine Network’s Laurie Oakes that a government whip, Andrew Nikolic, texted Malcolm Turnbull on Friday wanting him to make a public statement ruling out a challenge to Tony Abbott. Turnbull indicated his practice was to say nothing so as not to fuel speculation. Oakes said a minister close to Abbott also contacted Turnbull along similar lines.

“Turnbull backers now predict the leadership will come to a crunch this year, and there are reportedly some who would like that to happen this week because there will be a three-week parliamentary break after Canning. But other Liberal sources discounted an early move.”

Journos as fortune-tellers: who predicted the spill?

Has any Prime Minister ever dissolved the government without consulting his ministers.. Ruperts twitter account thinks it’s a good idea however it also thinks the reefs fine and that Trump is good for US democracy.. The LNP might need to station a posse on the road to Yarralumla to head Tones off at the pass..

“Turnbull indicated his practice was to say nothing so as not to fuel speculation.” Which is consequently fuelling the speculations even more.

My bet is that Abbott’s approach to this will be: “If I’m going down, I’m taking everybody with me”.

. . . so should the PM either stand down as a favour to his Party or, wait to be dumped by said Party? End result being we the Electorate decides or, does the American again marshal his troops [News Corp.] to replicate his own version of ‘right to rule’ as before?

I DO NOT subscribe to Crikey to read commentary by the media about the media.

No doubt Myriam you were asked to write this crap, so this isn’t personal – but please Crikey stop this meaningless ‘commentary’ … on commentary. You’ve only got a certain amount of space a day and there’s lots of stories to tell.

The reign of terror may soon be over — perhaps. It was inevitable as the chaos and denail cannot continue — Abbott and his mob have stuffed up badly. The “own goals” mount — its as if kicking the goal and fouling the keeper “afterwards” has grown into an art-form of stupidity and incompetence. Abbott has created an unholy mess whereever you look — with the economy tottering on the brink of recession.
The much maligned unions are striking back forcefully to reclaim the ground lost with public opinion over the outcomes of the Royal Commission, the Liberal Party misuse of sponsor funding, and the ChinaFTA debacle of misinformation and contradiction where even Robb as the negotiator has lost the plot when it comes to “on message consistency”.
Abbott judgement and Captian’s picks Prince Phillip, Bronwyn Bishop , now Dunderhead Dutton all have contributed to a PM in the death throes — having been a ” dead man walking for 6 months”.
The second chance was worse than than the circumstances of the first challenge– much worse — and there will be no third chance Murdoch will see to that.
The only solution is an election as the leadership rivals are already tarnished in their blind support of Abbott for too long — with their own stupidity adding to the ” baggage”.
Turnbull the main contender – the NBN debacle of mismanagement plus the pilloring of the ABC and its defunding and the complete mess of ” media reform ” by adding to Murdoch’s ability to ” rent seek” will deter many including Murdoch.
Julie Bishop now shows she lacks the nouse and ticker when on the backfoot by resorting to childosh behaviour and name calling.
lets end this farce soon.