Just five days out from polling day, the government has announced close to $120 million in funding for the Canning electorate. Will it be enough to save Abbott? 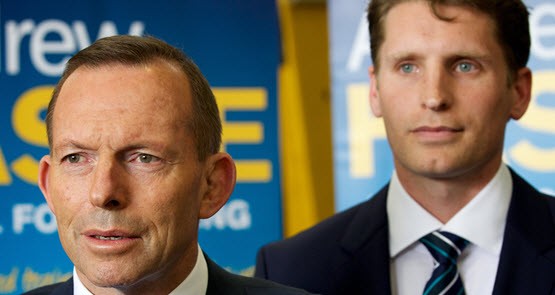 Tony Abbott and Andrew Hastie campaigning over the weekend

How much is the government willing to promise Canning to save Tony Abbott’s prime ministership? Quite a bit, it turns out, at least if you’re worried about roads or crime.

By all accounts, the Canning byelection this Saturday will be a major test of Abbott’s leadership. Although senior Liberal MPs are being quoted as saying that a leadership challenge is inevitable, regardless of the outcome, all eyes are on whether Liberal candidate Andrew Hastie can keep the seat for the Liberals, or whether Labor’s Matt Keogh will nab the seat, and mark the beginning of the end of Abbott’s time as prime minister.

Polling by Ipsos and Galaxy suggests the Liberals will retain the seat, but what was once a safe seat for the government will now be considered a marginal seat, both putting the two-party preferred vote at 52-48 in favour of the Liberals.

And just five days out from polling day, the government (along with the Western Australia Liberal state government) has announced close to $120 million in funding for the Canning electorate.

While many of Hastie’s own announcements have been around cracking down on the use of methamphetamines in the electorate — one journalist on Friday asked Hastie whether he had any other topics to make announcements about — much of the funding announced has been around road projects and public safety.

The largest announcement so far is $116 million for the Armadale Road duplication between Anstey Road and Tapper Road. Abbott announced it on Saturday.

“The project will improve safety and ease traffic congestion on one of the main east-west links within the Perth metropolitan transport network,” he said.

The $145 million project is being mostly funded by the Commonwealth government, with the WA government chipping in the remaining $29 million.

Keenan took a detour from his normal policy area and announced $3.4 million in funding for “a new two lane bridge over Beenyup Brook in Byford” on Saturday.

“Two ageing bridges on the busy South Western Highway will be replaced with a new, wider structure built to meet the latest safety standards,” Keenan said. “This project will improve the economic capacity and safety performance of this section of highway meaning businesses can get their products to market more quickly and efficiently.”

The government is only pitching in half of this funding ($1.7 million), with the other half coming from the WA government.

This was one of three announcements from Keenan on Saturday, including another $150,000 (on top of $420,000 secured by former member the late Don Randall) for the City of Mandurah’s Family Friendly Foreshore project, targeting crime and anti-social behaviour in Mandurah to be delivered under the Coalition’s Community Development Grants program.

“All Australians have the right to feel safe and secure in their community. This funding will deliver key crime deterrents including closed circuit television (CCTV) cameras and lighting to ensure Mandurah remains a safe and attractive place for families,” he said.

“Projects like this are a key part of the Coalition government’s investment in security infrastructure nationwide to reduce street crime and violence.”

Abbott has also been quick to point out where the government has invested in the electorate in the past.

“We’ve committed almost $1 billion to the Perth Freight Link, we’ve committed $600 million plus to the Swan Bypass and the Perth Gateway projects. When Western Australia had a GST problem we stepped in with $500 million to ensure that road projects that would otherwise have been cancelled or delayed kept going ahead,” Abbott said.

Hastie also has his “Canning Ice Action Plan”, where he has promised to use his skills as an army captain “to help co-ordinate a tough, rigorous, yet compassionate approach to dealing with drugs and crime” in Canning. Hastie has declared he would set up a taskforce and a community forum to report back to government within 30 days of being elected. He’s also called for mandatory sentencing for people selling ice (though that is a state issue, and not something a government backbencher would be able to legislate on).

There is a candidates forum organised by the West Australian and Channel Seven organised for Thursday. We can probably expect a few more funding announcements to be made then as the race gets tighter.

“where he has promised to use his skills as an army captain “to help co-ordinate a tough, rigorous, yet compassionate approach to dealing with drugs and crime” in Canning.”
Will he be co-ordinating air strikes on clandestine drug labs? I thought law enforcement was a state police responsibility, not the local pollie (and Federal at that).

The “vice captains pick” as proclaimed by Julie Bishop is looking more and more like a trojan horse for captain clownshoes .. it’s looking like an Indian premier league fixture with both sides determined to lose..A Weekend at Bernies, Zombie Apocalypse double feature…popcorn please..

Can someone ask Abbott to promise that the pork will still come Canning’s way if they don’t win the by-election?

(This was asked of Campbell Newman during the recent Qld election and he screwed up the answer good’n proper).

What, they have the war criminal John Howard on the hustings? I’ll bet none of the journo’s are asking him to comment on Captain Abbott’s proposed bombing in Syria, against the disaster that formented this fiasco under the Howard regime- the ivasion of Iraq.
Sadly, we have few journo’s with the attack skills to show up these imposters for what they are.