By turns incompetent and dangerous, Abbott’s time as PM is up

If Tony Abbott's colleagues can't tell whether he's incompetent or dangerous, it's time for him to be removed so the government can start governing. 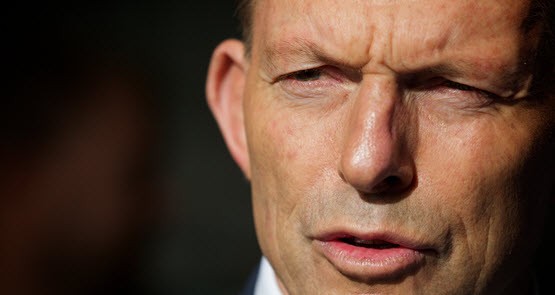 One of the more alarming aspects to emerge from the crazy paving-like splits that now characterise the Abbott government is how dangerous some of Abbott’s own colleagues believe the Prime Minister to be.

The Australian Financial Review’s Tony Walker on the weekend reported a remarkable statement from one of Abbott’s senior colleagues about his handling of national security and the Middle East: that Abbott is motivated by a biblical view of good and evil, one that can’t accommodate nuance. “Abbott would have us do things in the Middle East that would have had your hair stand up on end.”

Engaging in high-risk ventures in domestic policy is one thing — perhaps sometimes a good thing. Engaging in them by putting our ADF personnel in harm’s way, in a region as complex as the Middle East, in a way that could only serve to increase the risk of terrorism to Australians as part of a smite-them-hip-and-thigh mindset, is extraordinarily dangerous and exactly the thinking that led to the Iraq invasion and occupation, which Abbott last week conceded, with an uncharacteristic measure of understatement, had not “magnificently succeeded”.

Nor is Abbott’s own party safe from him. “He’s crazy enough to do it,” one of his MPs said of the idea of calling a double dissolution election immediately after this weekend’s byelection (which would impress Canning voters, dispatched to the polls twice in two months, no end), even though on current polling Labor would coast to victory. Abbott this morning dismissed the idea, saying he would go to the middle of next year “and beyond”, but Laurie Oakes last night reported he had discussed the idea with Rupert Murdoch. Whether his chief of staff, Peta Credlin, whom Murdoch had demanded Abbott sack early this year, was present isn’t clear. Abbott taking advice on poll timing from Murdoch (we know what advice Rupert gave him) is just one of many WTF moments that now slip by, almost unnoticed, so eccentric has late-era Abbott politics become.

Then there’s the question of the origin of the story that has sparked the leadership issue into life — Friday’s reshuffle story dropped to Abbott’s favourite journalists that targeted Abbott loyalists for elimination in favour of young Turk ministers. So damaging was the story, and the timing so rotten, that the idea that it came from Abbott himself seems hard to credit. But so inept is the judgement of Abbott and his office, such a tin ear do they have for political nuance that it’s not beyond the realms of possibility that someone in the Abbott camp thought it would be a good idea. Certainly plenty of Liberal MPs think that’s the case.

We’re thus at a point somewhere between “cock-up or conspiracy” and “with friends like these, who needs enemies”, where Abbott’s political incompetence and that of his office are, even for senior colleagues, indistinguishable from the actions of a leader bent on harming the national interest and the interests of his own political party. Until recently, it has merely been a case of not doing anything: economic reform has ground to a halt, action to reduce the deficit has been abandoned, difficult policy issues are withheld from cabinet consideration out of fear that the splits between ministers will become media fodder. Now, Abbott appears downright dangerous — apparently eager to use national security and our military as political playthings and willing to consider leading his party into a snap election trailing by a huge margin (and with an unreformed Senate voting process likely to produce a huge crossbench).

Further marking time by the Liberals serves no interest — not the party’s, nor the nation’s. After this week, Parliament doesn’t return until mid-October — another four weeks of policy paralysis and who-knows-what national security “announceables”. The Liberals have within them the potential for a competent, effective, reformist government. It’s time to get on with the job, and that start with removing Abbott and his hapless Treasurer.

How playing favourites with media brought Abbott down

Takes some people longer to see the obvious?

“….The Liberals have within them the potential for a competent, effective, reformist government…”? …. We haven’t had the election yet.

Poor old “Billy” McMahon he was universally acclaimed as our worst ever Prime Minister and was assured of being forever remembered…. now he’s just footnote collateral damage in the ongoing Abbottaclypse …

I have a question maybe Crikey can help me with:

In the event of the government winning a double dissolution election, and there being a joint sitting under section 57 to consider the bills that gave rise to the election, can the Government use its numbers to gut bills by “amending” them, so for instance, could a bill concerning reforms to higher education become a bill to introduce a 15% GST?

Could a government use a double dissolution as a blank cheque to pass almost any law it likes?

Knowing Cap’n Abbott’s track record for breaking promises; and being loose with the facts/truth; and that he is taking counsel from Citizen Rupert, a double dissolution is a distinct possibility.
I am certain CR has told Tony any number of lies will be spun by his media rags to justify a return of the LNP.
The problem is we are attacking the man when it’s the policies of the LNP that should be addressed.