Will we help Syria's gay refugees? ... charities commisison safe, for now ... pizza on the menu ...

So much for compassion. While the government is continuing with it’s line about prioritising “women, children and families” from “persecuted minorities” in the intake of 12,000 refugees from Syria, it is difficult to imagine a minority more persecuted than gay men living in Syria and Iraq. The so-called Islamic State’s notorious snuff movies include footage of these people being pushed to their deaths from high buildings and their bodies pelted with stones by the jeering crowd, just for good measure. Many of those who have escaped this fate have suffered rejection, if not physical assault, by members of their own families, as compellingly described by Syrian refugee Subhi Nahas.

And yet the guidelines sketched out for the 12,000-strong intake of refugees from the region do not appear to provide a space for them. Tony Abbott’s announcement of the program emphasised that “women, children and families” are to be regarded as the priority. Single men — and one suspects single Muslim men in particular — are not wanted on Team Australia.

It might be a stretch to imagine Abbott modifying “women, children and families” to “women, children, families — oh, and gays”, but if he’s lookin for persecuted minorities, they are there.

ACNC safe — for now. Social Services Minister Scott Morrison quietly announced this week that the government wouldn’t be canning the Australian Charities and Not for Profits Commission (ACNC), admitting to a Philanthropy Meets Parliament Summit that the legislation wouldn’t make it through the Senate. While the not for profit sector has welcomed the news, some are still a bit reluctant to give ScoMo a pat on the back. CEO of Community Council for Australia, David Crosbie told ProBono Australia:

“I’m disappointed. It seemed to me that it was a mixed message. I have to say I personally, as soon as I had a chance, asked the Minister’s advisor what it actually meant and to be honest we’re still not exactly clear on when the legislation may be withdrawn.”

What could have been a good opportunity to get the sector onside seems to have passed right by.

When the moon hits your eye … A new season of the ABC’s Kitchen Cabinet is in the works, and we hear from a tipster that when Annabel Crabb dropped in on new Greens leader Richard Di Natale he served up homemade pizza — harking back to his Italian roots.

Never throw books away. After what was described as a “tense” interview with Prime Minister Tony Abbott this week, in which Leigh Sales asked the PM why his success as opposition leader hadn’t translated to being one of the most effective prime ministers, Sales and her bestie Annabel Crabb on their must-listen podcast Chat 10 Looks 3 were discussing whether signed books should be kept. Sales, a self-described “religious chucker”, said she barely kept any books. One regret she had, however, was not keeping the PM’s own book Battlelines, published in 2009 before he was opposition leader.

“You know what I did, and I really regret? This is a terrible confession, and I hope Tony Abbott doesn’t listen to the podcast,” Sales said.

“Years ago when Battlelines came out … he gave me a ‘To Leigh from Tony blah blah blah’ and when I was doing one of my regular chuckouts, I looked at it — and this was before he was opposition leader — and thought ‘if I need that in future, I can get it, Tony is never going to be prime minister, I don’t really need an inscribed copy of his book’ and I turfed it.“I’ve regretted it very much.”

“You idiot,” Crabb replied. “I’ve got my signed copy in this office somewhere. I can’t read the inscription because he has the worst handwriting of anyone I’ve met. Think your average GP to the factor of 10.”

Welcome to Facebook. New South Wales Treasurer Gladys Berejiklian has made her first foray into the world of social media, joining Facebook this week. She started with a video featuring Premier Mike Baird, ultra-popular despite his conservative views on marriage equality. The Premier, who has already been making a name for himself on the medium with his Baird’s Eye View videos, gave Berejiklian a few pieces of advice — use emoji and  hashtags and be yourself. 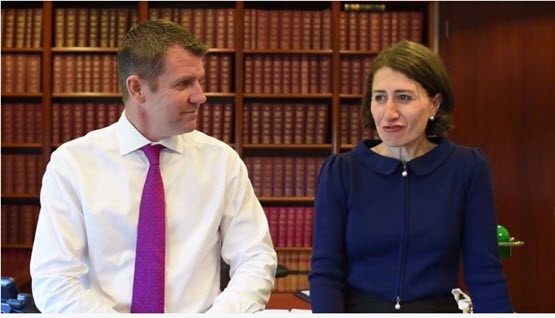 The world according to Nikolic. Crikey’s favourite far-right Tasmanian MP and noted supporter of free speech Andrew Nikolic is well worth heeding when it comes to Middle Eastern issues given his experience of training the Iraqi Army and his enthusiasm for bombing Iran. For instance, last year he offered this analysis of Islamic State:

“First, the threat from ISIL (sometimes known just as IS or ISIS)… ISIL is not just another terrorist movement. Rather, it’s an ‘aggregated terrorist corporation’ looking to cement and grow a fundamentalist terrorist home or state. The world has not seen or faced down such a challenge in our lifetime.”

OK, so we’ve got that, Andrew — IS is a completely different kind of threat, and certainly not just your run-of-the-mill terrorist outfit. Fair enough. But Nikolic returned to the issue just a couple of months ago… to rail at people who said IS — or Daesh, as he now calls it, in line with his leader — isn’t just another terrorist movement: “To say that Daesh is a unique enemy and must be approached differently from others is also superficial. These transnational terrorists are just another ruthless enemy with a clear agenda, but without the civilising limitations imposed by either the rules of law or the conventions of war.”

So IS is a “completely different kind of threat” that “the world has not seen or faced down … in our lifetime” but calling it “a unique enemy” is “superficial” — in fact it’s just another ruthless enemy. Thanks Andrew. Clear as your government’s strategic goals for Syria.

Canning in my heels tonight. Our spy in the electorate of Canning, Deep Buttock, which he tells us is his nom de guerre, tells us that while a number of federal MPs have suddenly found they have important business over in the West during a sitting week, there’s nary a journo to be seen. While we’ve already reported that Andrew Hastie has decided that the drug ice is the election’s hot-button issue, he’s also been pushing his credentials on the Armadale Road. Says Buttock:

“It seems that Mr Hastie has decided that the major road problem in Canning is Armadale Rd (I can sense the keen excitement pervading the rest of Australia as I type this), whereas Denny Ave and Thomas Rd are far worse. Not sure why this should be unless the Great Principle of DISTRACTION, as seen in the ice scourge leaflet, is a general one to be applied to roads as well. We in Canning are quick to note that the road leaflet tells us that Mr Hastie and Mr Abbott merely ‘discussed the possible upgrade and duplication of the most critical sections of the road’. We in Canning are aware that this is a State and Local Govt  issue, and pictures of Mr Abbott, Mr Hastie and Mr Cormann earnestly studying a map of Syria in the middle of Armadale Rd will not impress us much.”

Buttock has, however, received a letter from none other than John Winston Howard espousing the virtues of Liberal candidate Andrew Hastie. 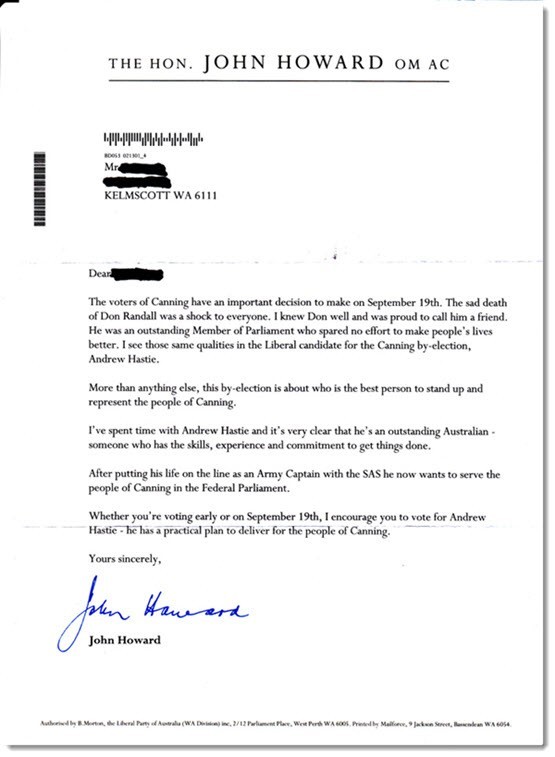 It must be fun to live in an electorate with a byelection — the voters of Canning haven’t got this level of attention in any general election!

Financial Services Union not so unified. The Financial Services Union seems to be imploding through a series of emails to its members from the union from members of the executive. On Wednesday national secretary Fiona Jordan let fly against members of the national executive, saying  “as members of the union, you have a right to know what has been occurring”. She goes on to accuse members of the national executive of interfering in her efforts to make changes to the union. She asked members to email her to voice their support, providing her personal email address in case she lost access to her official FSU address. Hours later members received yet another email, this time from the South Australia and Northern Territory branch president Tracey Piltz and secretary Jason Hall. It denies Jordan’s claims, saying: “It is very rare that one person is right and everyone else is wrong — such an assertion does not pass the ‘pub test.’”

Looks like this stoush won’t be over any time soon.

“He was an outstanding Member of Parliament who spared no effort to make peoples lives better” particulaly his own own using tax payer funding to inspect his investment property in Northern Queensland.
“I see those same qualities in.. Andrew Hastie”, he’s a propspective rorter too.

For readers hoping this might have actually had new news, or even a reappraisal of the nonsense peddled so far by Crikey, this regurgitation would have been a disappointment; but Crikey’s Acolytes will be content won’t they.

Just reading Howard’s letter and note the line “He (Don Randall) was an outstanding member of parliament who spared no effort to make people’s lives better. I see those same qualities in …….. Andrew Hastie. Same qualities? Mate, SAS Captain Andrew Hastie’s “qualities” were being good at killing people, the opposite of making people’s lives better. I guess he’ll fit in well in an Abbott government. Future Immigration Minister?

Seeing such minnows attempting to ‘criticise’ their intellectual and personal betters at least raises a mild chuckle, doesn’t it.