Spare a thought for those who don't want to legalise gay marriage. The media are awfully mean to them and call them rude things like "homophobe" and "bigot". 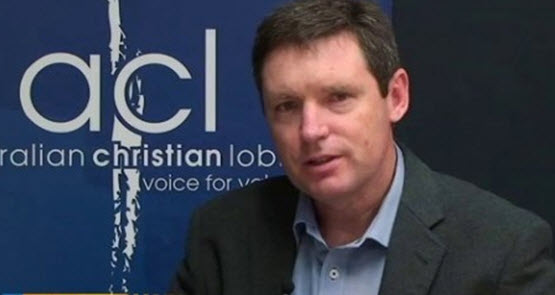 Those opposed to same-sex marriage want to be able to make their case why gay relationships aren’t equal to heterosexual relationships while demanding they not be called homophobes or bigots.

The legislation before the Senate put forward by the crossbench and the Greens would require the government to go to the election with a plebiscite on same-sex marriage. Most marriage equality proponents only support an election plebiscite as a last-ditch effort to get the issue resolved, rather than delaying a plebiscite until 2017, when Prime Minister Tony Abbott — and those who are fighting tooth-and-nail to stop Australia following almost every other Western nation in legalising same-sex marriage — want it to be held.

Australian Christian Lobby spokesperson Lyle Shelton told the committee examining the legislation on Thursday that despite the fact that the issue had been before Parliament in 16 different pieces of legislation in the last decade, it hadn’t been debated in full.

“I guess in the face of the relentlessness of this, where are we left to go? We support this going to the people … I think that’s the best way to resolve this.”

He claimed that those opposed to marriage equality were no longer given media coverage, so time was needed to hear both sides.

“The overwhelming weight of media coverage has been pro-changing the definition of marriage,” he said.

He said it had been “11 years of one-way traffic” on the debate.

“Any objective observer of the media would know the weight of the media coverage has been very much on the other side, and that’s the prerogative of the press.”

Liberal Senator Ian Macdonald said there had not been “fair reporting” on the issue.

“Particularly the ABC has run nothing but one side of the argument for the better part of a decade or more,” he said.

Shelton was not in favour of forcing commercial stations to take advertisements or run his side of the argument but said that the “shackles of political correctness” needed to be broken.

“We’ve got to break the shackles of political correctness that is around this debate and the fear and intimidation that many on our side of the debate feel, because this is often characterised as those who don’t support changing the definition of marriage as somehow bigots or prejudiced in some horrible way. We certainly reject that. This is not a debate against people, or individuals, this is a debate about what marriage is,” he said.

When pushed on how a “respectful” debate would happen, Shelton could not offer any suggestion outside of how his own side should be defined.

“I think the court of public opinion is a good court, but on the other hand, I think we must not allow political correctness to stifle legitimate debate,” he said.

“Mr Shelton, you and I are never going to agree on political correctness, what do you mean when you say that?” Labor Senator Claire Moore said.

“I think when you see slurs used instead of argument. That’s where political correctness has its way. When terms like bigotry and homophobe are used, I think they’re unhelpful in this debate. I think we should expunge those terms from the lexicon. If someone is being disrespectful, call it out, but I don’t think there is a place for labels or slurs.”

Law firms and human rights organisations speaking before the committee warned that any “yes” and “no” debate funded by the public would be detrimental to the mental health of children raised by same-sex parents, and LGBTI children themselves.

“I did not think a plebiscite or referendum should be held from the perspective of children’s rights,” Paula Gerber from the Castan Centre for Human Rights said.

“There are two groups of children likely to be harmed if a plebiscite or referendum is held on marriage equality. Those two groups being the 6000-plus children being raised by same-sex parents … and also LGBTI youth. All the research demonstrates that LGBTI youth are vulnerable, have high instances of mental health issues, higher rates of suicide. To have a publicly sanctioned campaign that allows vitriol against these two groups of children is likely to cause them significant harm.

“We saw the kind of dialogue that ensued from the Gayby Baby film in New South Wales. For that to be replicated on a national level is not going to be in any view in the interests of children.”

Anna Brown from the Human Rights Law Centre argued that if there was to be a publicly funded campaign, it should have rules on what people could and could not say.

“From our perspective, a sustained campaign on these issues does have the potential for great harm for LGBTI people … and also potential for religious vilification,” she said. “Public funds could be spent to promote hatred … and potentially those negative health impacts are troubling.”

“For those who support what is described as the traditional view of marriage, what they suffer is hurt feelings that people don’t agree with them, I can’t put it any higher than that,” Khan said.

“For teenage LGBTI youth, going through the decisions on whether to come out, and trying to work out what their sexuality is, to be bombarded with what would be a period of months of this campaign, is potentially extremely destructive.”

“Kids in the country suicide at a much higher rate than those in the city. The reality is, we are looking at the prospect of doing serious damage to children out of this debate, and it cannot be controlled,” he said.

Khan said Parliament had the power to pass marriage equality into law now.

The committee is due to report to Parliament next week.

If demanding the right, not to mention privilege, to denigrate other people according to your delusion beliefs is not bigotry, what is it?

This is not a moral issue, it is a legislative issue. We recognise the rights of same sex people in law, in every respect except their right to marry. Discrimination is illegal, therefor the Law itself is breaking the Law! Change the Law! We don’t need a plebiscite at a cost of $100,000,000 for that to happen! If Churches don’t want to marry gay people, fine, they’re a club and those are the rules, but my Son & Daughter aren’t in your club, they just want to be treated like everyone else. Australia is a secular society and like any other group, religion can put forward their opinions, but they should have no more say than any other legitimate minority.

Rick: “If Churches don’t want to marry gay people, fine, they’re a club and those are the rules,”

Fine. But most clubs are not tax exempt and do not qualify as charities. If they want to behave like this, then they can choose, but they should lose tax status as well.

Old trick, this. Turn yourself into the victim. Those who have dominated (silently) the right to govern human intimate relationships are now threatened, and so proclaim victimhood.

It is the desire and ability to control the love and intimacy of others that is harmed.

This shallow resentment and whining about their suffering by name calling is an inversion of reality. As if by magic the oppressor becomes the oppressed and demands liberation them our oppression of them.

Claiming victimhood does not give the whiners moral authority but it does amplify just how hollow their claimed authority over everyone else is.

Lyle and company might get a bit of spine, show some respect for themselves.