Triple J Hack Twitter acount hilarious ... but not at Ultimo. Plus other media tidbits of the day.

So reads a tweet from a parody account spoofing Triple J’s Hack. The @jjjHack account, not to be confused with the legitimate @TripleJHack account, has amassed 30,000 followers since Monday with a steady stream of tweets mimicking Triple J’s chatty, uber-enthusiastic tone.

“Are Aussie house parties too unsafe? We talk to John who’s been yelling from somewhere underneath the floorboards since last Wednesday,” reads its most popular tweet. “We caught Harold Holt’s granddaughter after her epic DJ set and asked how hard it is for prime ministerial descendants to break into EDM,” says another. (EDM stands for electronic dance music.)

But is the popularity of the account, which already has more than half the followers of the actual Hack account, ruffing some feathers at Ultimo? Crikey hears that Hack’s staff have been warned, via text message, not to engage with or share the spoof account. Hack host Tom Tilley confirmed that staff had been told to be careful, but in recent days attitudes had softened towards what was now being seen as a loving homage to the show. “Initially our manager did tell us to be careful about engaging with the account or sharing links because we had no idea or no control over what direction it could take,” Tilley said. “But it’s been a total LOLfest”

“It is hilarious and we’re quite flattered,” Tilley added. “Clearly they’re massive fans of the show.

“We’ve just closed applications for someone to join our social media team, so hopefully whoever is behind it has applied.”

Crikey also contacted the email address on the account, partly to test our conspiracy theory that it was an inside job (the tone is pitch-perfect). Alas, we didn’t hear back by deadline. — Myriam Robin

Wrong again, Maurice. Time to check in again on the latest from Maurice Newman, the ex-banker with time on his hands and a lot to say. Most of what he says is the usual boilerplate — a columnist in the country’s only national broadsheet whining about being silenced because people express ideas contrary to his. But his ability to get the simplest ideas horribly wrong is always a treat. Here he is on why t.e.h. Twitter is badz:

“Media guru Marshall McLuhan believed the medium shapes and controls ‘the scale of human association and action’. As he predicted in The Gutenberg Galaxy, Twitter and Facebook have subtly redefined the medium of communication. When added to the mainstream, they bring ­mutually reinforcing authenticity to the message, warranted or not.”

God, McLuhan now? OK let’s untangle this. Maurie manages to get McLuhan half right in the first sentence and not get the point the first sentence makes in the second. McLuhan’s argument was that no medium is “truer” than another — every medium, including print, communicates, distorts and, to a degree, engineers truth in a certain way. McLuhan doesn’t provide an argument against social media, rather an argument that print is no better or worse than social media. For McLuhan there is no “mainstream”, there’s simply a constellation — or I dunno, what’s another word, galaxy (why does that sound familiar?) — of different media. We know you graduated from the University of Life Maurice, taught you a thing or two, fair day’s work, you could go to the talkies for sixpence, etc, but if you’re going to quote books, you’d better read them, with a view to understanding them first.

Yeah, I know, I know, the Oz is just something for the dentist’s waiting room, and Newman’s column would be better replaced with scratch-pad white space to play hangman. But, heh, it’s fun. If only there were some filmic record of some clown getting McLuhan wrong. — Guy Rundle

Closer to home now … New all-time lows yesterday for the Ten network and Seven West Media. Ten shares eased to 16.5 cents. Seven West Media’s shares touched 66.5 cents in trading yesterday to close at 67.5 cents. Ten’s shares are now 1.5 cents under the 18 cents the proposed Foxtel deal was priced at. The ACCC rules on that deal on Monday by either issuing a decision or a statement of issues. Seven West Media shares continue to sink for no apparent reason except investor suspicion. Seven West is now valued at just $1.02 billion. If the value falls under $1 billion, would Kerry Stokes be tempted to mop up the 59% he doesn’t own? — Glenn Dyer

Front page of the day. After another deadly day in Queensland, The Courier-Mail does this … 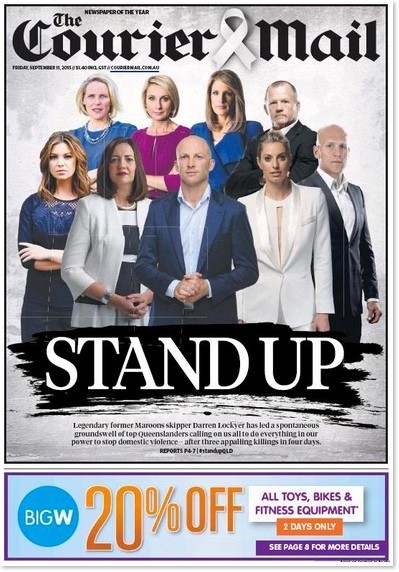 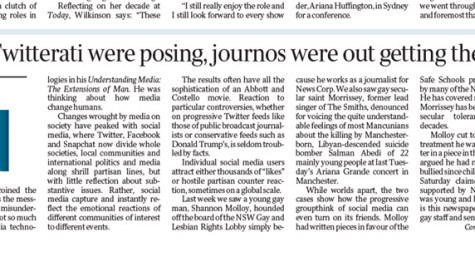 C’mon, Chris Mitchell, leave Marshall McLuhan out of it

Re the Front Page of the Day, does anyone know, or care, who those ‘people’ are/were/might be?

That’s Darren Lockyer in front (retired captain of the Australian rugby league team) with the Queensland premier to his left.

I’m so used to that paper vilifying labor on its front page that when I first saw it I read the “stand up” as “look at these stand up comedians, what a joke”.