Journalist Jess Hill says progress has been made, but much more needs to be done. 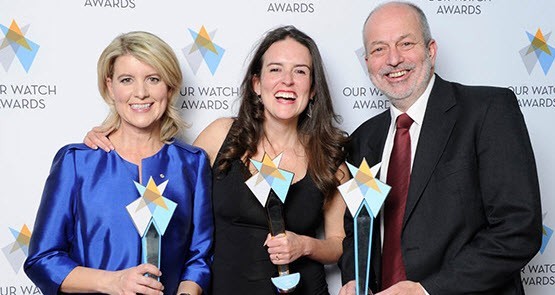 “I clearly remember the day I decided to dedicate a year of my life to this work,” said Hill, a former foreign correspondent.

“I came home from visiting a women’s refuge, thinking about a woman I had met there. I was hanging my washing on my clothes line, and it struck me that I felt safe. And the injustice of the fact that so many women do not feel safe in their own homes hit me in that moment.”

It was a sombre ending to a sombre day filled with news stories about women killed, beaten or harassed at home and in public. Yesterday morning, news broke that the family of 24-year-old Gold Coast woman Tara Brown had decided to turn off her life support, after she was severely bashed to the head by someone alleged to be her boyfriend. A few days earlier she had approached police for advice about how to break up with him, and was turned away.

Her death was mentioned by several of the speakers at the awards, including Our Watch chair Natasha Stott Despoja, who opened the evening by saying Brown’s death showed the urgency of relentlessly combating the causes of domestic violence against women and children.

It’s the first year the Our Watch awards have run, after the Victorian Eliminating Violence Against Women (EVAs) media awards received funding to go national in 2013. The awards recognise exemplary reporting on domestic violence, which must be complex, nuanced and supportive of victims. Earlier this year, the awards were launched by Australian of the Year Rosie Batty at the National Press Club. She told the nation’s media that when her son was killed, she woke up to media attention many assumed she would rebuff.

“I was initially going to tell you all to go away, but soon realised the opportunity I had to name family violence, highlight its prevalence and tell the nation that something must be done,” she said. Since then, Batty has spear-headed a national drive aimed at educating the nation’s media about responsible reporting of domestic violence. She has urged the inclusion of the 1800-RESPECT victim support number at the bottom of news stories, and has also taken particular aim at stories that she says blame the victims, or turn them into objects of mockery.

The urging found a highly receptive audience through much of the media, including through much of the tabloid press (though, Meltwater found in June, only 8% of news articles on domestic violence include the 1800 number). “The number of articles devoted to the issue of violence against women currently exceeds anything we have ever seen before,” Batty said. “Front-line services who often felt frustrated by the lack of media attention regarding what was happening ‘behind closed doors’ are telling me the same thing.”

The Our Watch awards received 177 entries, and narrowed them down to six category winners. They were:

The Gold award was chosen from the category winners.

The 2015 Crikeys: Andrew Bolt sook of the year

‘It’s a tension’: Sarah Ferguson on the legal challenges of domestic violence doco

Any reason there’s no caption on this photo – who are these journos?

Hill is the one in the middle – next to her is Natasha Stott Despoja. Will ask re: captions