The government has found yet another way to damage itself and particularly the man it is relying on to fight the crucial battle with Labor over CHAFTA. 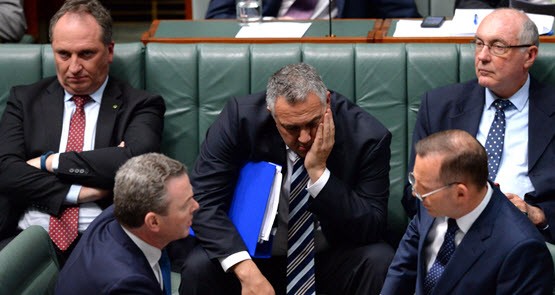 Just when it looked on track to have its least worst week in some time, the government found a way — as it always seems to — to damage itself, with a reshuffle story dropped to News Corp.

Depending on your point of view, it’s either deliberate destabilisation by disgruntled ministers or an astonishing brain snap by the Prime Minister’s Office. The authors of the story were the PMO’s go-to media practitioners, Simon Benson and Daniel Meers (who can forget Meers’  Woodward-and-Bernstein-like effort on Abbott at the snow a couple of months ago?), meaning the most likely scenario is the PMO decided that, given a possible bad outcome in Canning, signalling to ambitious junior ministers and a backbench wanting a more effective ministry that change is coming might help shore up support for the Prime Minister. Signalling that after Canning, of course, would look desperate. Hence the timing.

Alternatively, someone outside the Abbott camp wants to stir up trouble. Who might that be? Who are the suspects? Well, it’s a bit like Murder on The Orient Express, the whodunnit where the answer was “everyone”. Either way, it means the government is back to obsessing about itself again.

The reshuffle yarn (which Abbott has since denied) was, however, only the latest of a series of suggestions, usually from News Corp, that Trade Minister Andrew Robb be dumped. Given Robb is one of the best performers in a government with very few candidates for that title, the chatter is remarkable, and possibly driven by other, somewhat improbable mutterings that Robb might make a “safe pair of hands” replacement for Abbott. What does Robb think of such talk? He responded on Sky yesterday:

“I was preselected again a few months ago; it’s absolutely my intention to keep going. I’ve still got a big job to do before we even get to that election by the way; India and hopefully TPP, and Indonesia and others. I enjoy the job; I feel I’ve been training for it for 30 years given the eclectic background that I’ve got, and it’s been a wonderful opportunity. I feel privileged to have had the opportunity to nail some of these things, and I want to add to it.”

Sound like he’d be happy to be dumped? And remember the role played by Robb in the end of Malcolm Turnbull in 2010; Robb is not a man to lightly make an enemy of.

Robb is also point man on the government’s intense wrestle with Labor over the China Free Trade Agreement (CHAFTA). CHAFTA is the basis for a high-stakes political battle between Tony Abbott and Bill Shorten, and it’s a battle the government has so far done its best to lose. Yesterday — when the subject dominated question time from both sides — didn’t get much better. The government used the CHAFTA focus in question time to unveil a rebranding of the deal: it was now to be referred to as an “export agreement”. Labor mocked this mercilessly, and actually asked a question to try to force Robb to say the word “import”. He called that “juvenile”. “Of course if Australia’s exports to China, China exports to us. It is an export agreement. Don’t you understand?”

Indeed. So presumably we can also call it an import agreement too?

But Robb had made a more serious error earlier in that interview on Sky, when he admitted that a legislative change to address the exact issue Labor says is problematic — mandating labour market testing for large projects — was “not difficult to do”. Robb explained “it does create all sorts of complications. Firstly, there’s no other country that we’ve done trade deals with, that would have this legislation in place for, therefore the Chinese – who are our biggest trading partner, who’ve just spent 10 years negotiating this deal, who are very proud of the deal… Now for us to bring in legislation targeted at China, that is going to be an almighty snub. That will sour so much of the good will that’s been generated out of this.”

As a rationale for not undertaking a minor legislative change, that we don’t want to hurt China’s feelings, leaves a lot to be desired, and one unlikely to win over voters, particularly in Canning. To the extent that the good burghers of Canning pay any attention to what happens in Canberra, it might have even looked like the government putting Chinese feelings ahead of Australian jobs.

Even so, Robb remains the government’s best asset when it comes to CHAFTA. The fight over the deal has some way to go for both sides. But whoever thought it was a good idea to float the purging of Robb hasn’t helped the government’s already weakened campaign.

What a dismal thought – “Robb remains the government’s best“.
Poor Bugger, my Country.

Similar thoughts about the headline: “… a pretty good week.”

If that’s the best the government can manage, it should resign, call an election and let someone else have a go.

And at week’s end Duffer Dutton was the icing on the cake. Duffer failed to see the conspicuous boom microphone overhead when chatting to Abbott & Morrison. In true funster fashion he took what was intended to be a private swipe at beleaguered Pacific Nations under threat of rising sea levels.