Tips and rumours: TMI at the WA AG

Keep it in your pants, mate.

Too much information. On Monday we reported that a Western Australian government minister had allegedly sent an email to many of his colleagues, staffers and public servants that boasted of his manhood and his … ahem … skills in the bedroom. We asked if anyone knew who it was, and one tipster provided us the name — and the email. It looks like the WA Attorney-General is replying to a staff notification about their email system, saying he’s got a lot of spam emails. Mischin says the emails offered “a cure for my (non existent) erectile dysfunction” and “assistance to improve my sexual performance (which, I hasten to add, to my mind is quite satisfactory, thank you very much, and I venture to suggest would set an enviable example for many a young puppy a fraction of my age).” We asked Mischin’s office if he had sent the email and why, but were told that he would not be commenting on the issue. 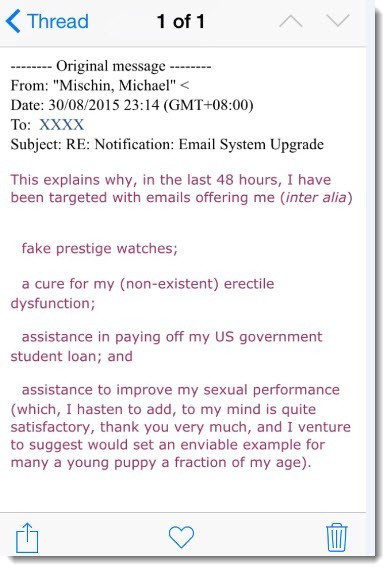 A 2009 timeline: vale Michael Jackson (and the ETS)