Too much information. On Monday we reported that a Western Australian government minister had allegedly sent an email to many of his colleagues, staffers and public servants that boasted of his manhood and his … ahem … skills in the bedroom. We asked if anyone knew who it was, and one tipster provided us the name — and the email. It looks like the WA Attorney-General is replying to a staff notification about their email system, saying he’s got a lot of spam emails. Mischin says the emails offered “a cure for my (non existent) erectile dysfunction” and “assistance to improve my sexual performance (which, I hasten to add, to my mind is quite satisfactory, thank you very much, and I venture to suggest would set an enviable example for many a young puppy a fraction of my age).” We asked Mischin’s office if he had sent the email and why, but were told that he would not be commenting on the issue. 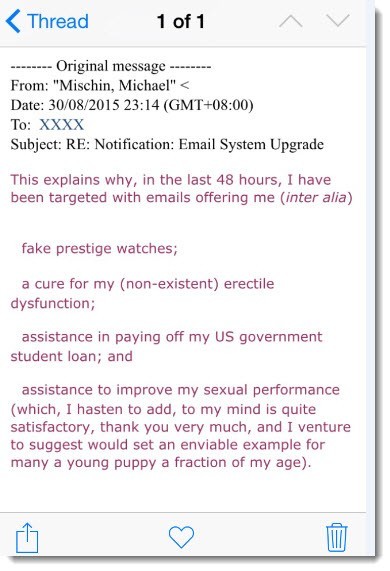 Albo, a beer or five, and a helicopter. Last night at King O’Malley’s pub in Canberra — named for the politician to blame for why we all have to spell Labor without the U — “The People’s Choice” Labor frontbencher Anthony Albanese launched his beer, Willie the Boatman’s Albo Corn Ale. It is a strong drop — Albo declared the beer “the Greens’ worst nightmare.” 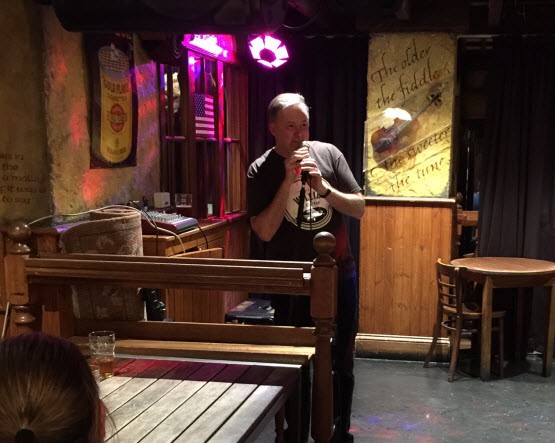 “I fight Tories in Canberra, but I fight Greenies in Grayndler!”

Crikey‘s own Josh Taylor tried the ale and found it to be “refreshing but with an unusual aftertaste”. Make of that what you will.

Albo said when he launched the beer at a pub in his electorate in Sydney, he accidentally went into the venue next door and discovered it was a “very successful” axe-throwing business. Maniax, it turns out, offers axe throwing parties for birthdays, corporate events, buck’s parties and hen’s nights. Albo said that people should be responsible and do the axe throwing before they down any Albo beer.

The music of the evening was a playlist put together by DJ Albo and included a solid mix of the finest ’90s and now tracks you will hear in a pub in Newtown, including Spiderbait, Madison Avenue and Daft Punk.

At one point, when Bloc Party’s Helicopter came on, Albo dedicated the track to former speaker Bronwyn Bishop.

Where mandarins go on public holidays. What do the mandarins of the Department of Veterans Affairs get up to when they are working on a public holday? They visit websites for Crocs, the Belconnen markets and plan a holiday. News Corp journo Jackson Gothe-Snape put in a freedom of information request in July to the Department of Veterans Affairs asking for ” a list of the web addresses accessed by computers in the Department of Veterans’ Affairs on Saturday, 25 April, 2015″. The request was successful, with the RighttoKnow website publishing the documents released to Gothe-Snape. The list, available here, includes predictable sites like Facebook, Google and many news websites, but there are a few strange ones — the Bath Chronicle‘s website, coupon website cuponation.com.au and howstuffworks.com. While the list itself is quirky but uncontroversial, it does set an interesting precedent — it is possible to FoI the websites visited by public servants.

Wait for the dole? Nope. While much of Parliament was focused on Syria, the Senate last night voted down the government’s legislation that would require people under the age of 25 to wait four weeks before they could get Centrelink payments. Apparently the Senate wasn’t buying the government’s “softer”, after its original plan of a six-month wait went down in flames. The legislation was voted down 35 votes to 30, with only Liberal Democrat Senator David Leyonhjelm and Family First Senator Bob Day voting with the government. Motoring Enthusiasts Senator Ricky Muir said he would be prepared to support legislation targeted specifically at people who had no interest in getting a job, but said that the legislation proposed by the government was too blunt an instrument for it.

“There may be young people who finish school, live at home, can’t be bothered looking for a job and expect the government to pick up the tab. This is not on, and if there was a policy that could guarantee that only these people would be captured, I could support that. However, I cannot support a punitive policy that paints all young people with the same brush in order to target a minority.”

Some of us are looking at the stars (or trying to). What do you do when the government cuts your funding? Protest and lobby to get the money back? After budget cuts to the CSIRO in last year’s budget it was announced that many research sites would have to close, including the Mopra Telescope near Coonabarabran in NSW, but the researchers who work there are crowdfunding to keep it running for another year. The Kickstarter campaign has so far raised almost $8000 of the $65,000 it needs to continue with the Mopra Southern Galactic Plane CO Survey, which still has sectors of the galaxy left to chart. The scientists say it would be a “tragedy for science” if the telescope’s work were left unfinished:

“Mopra is a telescope at the top of its game. Its productivity has never been greater. The number of papers written about the data it gathers continues to grow, as does their impact on the scientific endeavour.”

Being a galactic Kickstarter, the rewards for donors are out of this world, including the opportunity to adopt an interstellar cloud, a Skype chat with a scientist on the project, or one could even visit your school or library. We just want our own interstellar cloud, though.

Boots on the ground? Yesterday we reported that army reservists had been offered six-month posts based in Iraq or the United Arab Emirates until 2017, just a day before the government announced that it would be bombing Islamic State targets in Syria. We asked Defence if it the department knew how long troops would be deployed in the region, and received this response from a spokesoerson:

“Australia remains committed to the international effort to ultimately defeat Daesh, which threatens stability inIraqand theMiddle Eastand the security of Australians at home and in our region. As the Prime Minister and Defence Minister have said, the size and nature ofAustralia’s overall commitment to defeat Daesh will remain under regular review.

“Reservists are routinely considered to fill positions in the deployed environment as well as permanent serving personnel. Selection is based on the required skillsets, impact to capability and availability of personnel.  Reservists deployed on operations are considered the same as Permanent Air Force members. As such, Reservists receive the same remuneration and conditions of service as Permanent Air Force members for that particular operation. Deployments are generally of six-months duration, however this may vary depending on the role being fulfilled.”

Defence Minister Kevin Andrews has been more direct this morning, telling Channel Nine that Australia could be involved in conflict in the Middle East for years. “Two or three years I can’t say in exact terms but the reality is this could go on for a number of years.”

Tips and rumours: Albo, a beer or five, and a helicopter 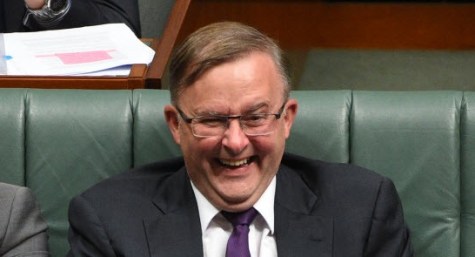 Albo is not giving up Grayndler without a fight

I’m surprised Michael Mischin did not get any emails from Nigeria asking him to help laundering embezzled funds from a person he’s assured is completely honest.

Actually, it’s a pretty funny email. And not in bad taste, considering.

I do hope the Labbie Albanese gets done over by the Greens.

JohnN – he showed his ethics in dealing with the Customs bloke in 2005, prosecuted by the rodent in 2007 and Albo did… SFA.