The journalists' union is continuing its push to keep the ASIC database as it is. Plus other media tidbits of the day.

Open arms. Australia’s newspapers had a sympathetic take to the 12,000 refugees Australia is to accept by the end of the year … 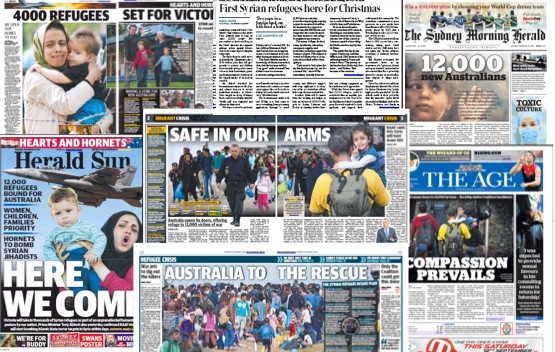 MEAA v Governance Institute — Canberra round. The journalism union’s meeting with Treasury about keeping the ASIC registry as is was “pretty constructive”, the journalist behind the campaign wrote in an email to cosignatories of a petition opposing changes this morning.

As Crikey reported, the journalists’ union was in Canberra yesterday to meet with Treasury officials about a push by the Governance Institute to replace company directors’ personal information like dates of birth and home addresses with a unique identifying number, in the interests of privacy and security. Journalists argue the information is a vital tool in business journalism — they need that information to cross-reference directors across databases.

“This is not a government proposal — it’s been entirely driven by the Governance Institute, who according to documents obtained under FOI have been lobbying Treasury since January (there have been three or four contacts, it seems — a bit difficult to tell precisely),” Oz business journo Ben Butler wrote.

Crikey understands the bitterly fought suggestion is, currently at least, a relatively low priority for Treasury, which currently has its hands full with things like the Murray Inquiry. It doesn’t help the Governance Instutite that no member of the government is currently championing the change. — Myriam Robin

Peak Guardian, with Guy Rundle. Clear the decks folks, it’s Peak Guardian Ratio time again. Drum roll on the mini-gamelan Gareth bought at Denpasar airport please, and it’s … a whopping 0.6. What looked to be a low week was rounded by a new entrant, Mr Jeff Sparrow, now a full-time home-based freelancer and thus, inevitably, author of a 2000-word essay about midday television. Congratulations, Jeff, but please mate, get out more.

Other entrants were hardy perennials. Eleanor Robertson was in for “why do baby boomers make millennials hate themselves?” — a sort of mobius-strip version of boomer articles, going around endlessly without resolution. Lindy West vowed to fight for the rights of someone she hated, a PGR perennial. Double points for it being an unfunny YouTube comedienne. A cat article, meh, and Jess Zimmerman, previous beneficiary of a wild card, is now in for a piece mentioning Instagram, barbies, and how well the latter does the former. Well done, all!

A quick note: raw PGR is the proportion of PG articles to all Guardian Australia op-ed pieces. It is divided by the number of op-ed pieces on global affairs, political economy or broad structural/social trends, with a nominal figure of “1” given if there are no such (to avoid a non-computable result). This week’s final PGR is 0.6. This week’s raw PGR is also 0.6.

Sadly, PGR will be taking a break for a while. Coming soon: Ozz Peako HuffPo. — Guy Rundle

Ten shares in trouble. Ten shares fell to a new all-time low of 17c on the ASX on Wednesday afternoon after doubts emerged about Foxtel’s acquisition of a 14.9% stake in Ten Network. The Competition Commission discussed the proposal this week and had been expected to make a decision today, or release a statement of issues (raised in market testing on the proposal).

That has now been postponed until next Monday, September 14. The commission’s public register yesterday showed the decision to delay was made on Wednesday, with the “former proposed decision date of 10 September 2015 delayed by ACCC to allow additional time to consider the proposed acquisitions”.The proposed deal between Foxtel and Ten was officially announced on June 15, and the ACCC began its review on June 25. Foxtel is proposing to pay 18 cents a share for its stake in Ten. Ten shares didn’t trade in the first 10 minutes of trading this morning on the ASX when the ASX 200 plunged 97 points in response to the sudden end of yesterday’s dead-cat bounce across Asia and Europe. — Glenn Dyer

Front page of the day. Trust the French to do this … 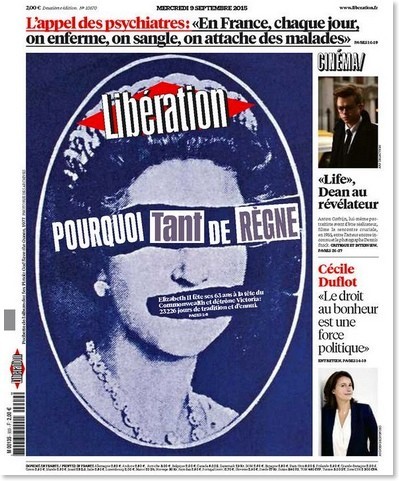