Abbott has managed the incredible feat of turning a serenade to the base and an act of unproductive war into significantly increased approval. God help us all. 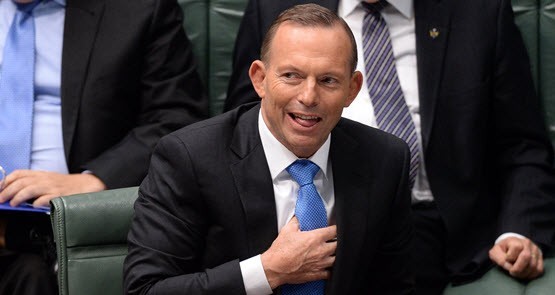 The Sydney sun may not be visible through the labour camp smog on this 2037 spring day, but a gale force wind loop has just cleared the stink of fracking from the harbour. The editor of our nation’s most storied publication, BuzzFeed, is the first to reduce the flow from his respirator, and Iggy Azalea, Red Bull-Nobel (TM) laureate for side-boob, acknowledges this act of courage by the press. “#SoBrave,” says President Azalea to Bob Irwin. “Journalism is not a crime,” he says, as he shares his top 10 dick-pics to the Peter Greste for Gatorade (TM) Freedom app.

It’s a cool 47-degree November morning but even so, temperatures are running high for this event. On any ordinary day, the My Kitchen Rules summit is an act of national importance, but this birthday cake edition is exceptional. “It’s, like, so bae,” says Azalea as she introduces the best friend asylum seekers have ever known in Coke Zero Australia (TM). Tony Abbott turns 80 today!

As the great humanitarian adjusts his carbon fibre Speedo, Pete Evans, Minister for Strong Feelings, reminds us all that this man saved many Syrians and the nation’s reputation. We each recall with pride that day in 2015 when 12,000 refugees began moving into a repurposed basement carpark co-managed by the Wilson Group and Hillsong and begin, as one, to chant the phrase for which this noble man is known, “Shit happens!”

Empowering images of Druze children, free at last to clean petrol stains from Australian concrete, are projected onto the sails of the Opera House, and there’s not a dry eye on the foreshore of this magnificent, brown harbour. The former prime minister acknowledges the traditional owners of the land, BHP Billiton, and is clearly choked not only by the emissions from nearby hydraulics, but real emotion as he accepts the Malcolm Fraser medal for creative revisionism.

Welcome to my nightmare.

It started last night and is bound to recur many times as the man who may be legitimately called our worst prime minister began his journey to be falsely remembered as our best.

This time last week, Abbott was screwing up tighter than a bottle cap. While the nation reeled from images of dead or homeless Syrians, he met great apolitical emotion with great political stupidity. When he offered that Nazis looked better compared to Islamic State, he managed not only to reopen the greatest wound of the 20th century and gravely insult many Jewish Australians, he completely misread the humanitarian majority who didn’t, momentarily, give a hoot who was responsible for these crimes. They just wanted to stop them from happening.

By last Friday, it became clear there was diminished support by foreign policy strategists for Australian military involvement in the region. By last Monday, it became clear that there was enlarged public support for emergency intake of Syrians. Despite all of this, Abbott continued to talk about airstrikes and even refused to rule out the possibility of land combat. His refusal over days to talk meaningfully about a refugee commitment was painful, his eventual hint, filtered through Eric Abetz and Julie Bishop, that these refugees would be Christian was obscene, and his solo dance to the sound of boots on the ground was pure foreign policy fantasy.  The United States, which has only limited land involvement in the binary conflict in Iraq, is yet to flag the possibility of sending its troops into the multilateral Syrian mess. Nothing Abbott or his ministers said made any sense.

This is due, in part, to the fact that Abbott cannot himself produce sense on the matter of warfare and that Kevin Andrews and Julie Bishop appear to have an understanding of conflict that is formed largely by the films of Clint Eastwood. I have come to believe in recent weeks that these people are profoundly ideological when it comes to the Middle East. I have also come to believe that they are profoundly cunning when it comes to fighting battles at home.

Abbott might not know how to fight a foreign war, or even commit efficiently to the US. But, he sure knows how to win elections.

This time last week, many Australians were expecting an immediate no-nonsense response to the horror disclosed by pictures of a dead Syrian toddler. Instead, Abbott seemed Tone-deaf. But this gross insensitivity is now beginning to look like the strategic beginning of a re-election campaign — one that might not only return him for a second term but redeem him, however wrongly, by history.

Abbott’s response yesterday to the Syrian crisis was strategically, and not accidentally, delayed by bigoted umming and aahing. By declaring first the superior value of Christian lives, even if this was not eventually enacted in policy, and by then declaring war, he plays to the people who can keep him alive. The hard right of his own party and a voting minority can be sure he still doesn’t like foreigners.  Perhaps he hasn’t stopped to consider that the unpardonable things he and his ministers have said about Muslims might work to increase the threat of domestic terror, thereby the hope of his continued leadership. But he’d know, at least, that divisive political speech is an effective means to provoke local jihadism, because he should have learned that from this expert report.

This is not to dismiss the importance of those 12,000 lives that will now be lived in Australia. This is not even to begrudge Abbott his likely future moment as a great man. A man even more grossly misrepresented as a saviour of refugees than Malcolm Fraser.

My nightmare of Abbott’s certain future salutation as a friend to persons of concern is, of course, of no matter. It will haunt me alone. But Abbott’s ruinous domestic and foreign policy will haunt the nation for decades to come. He has managed the incredible feat of turning a serenade to the base and an act of unproductive war into significantly increased approval. If only he were as shrewd a policymaker as a politician.

This is Abbott’s Dubya moment

A nightmare shared is a … nope it’s still a nightmare. FWIW you are not alone

I expect that Abbott does not believe in karma – but he is making plenty for Australia and we and future generations will have to deal with it.

As you sow, so shall you reap.

I don’t think he’ll get a second term out of this. You are probably right about this being a talking point in a few decades, though. I don’t look forward to hearing it.