A controversial image is at the centre of a debate around disability rights and the ACT's education system. 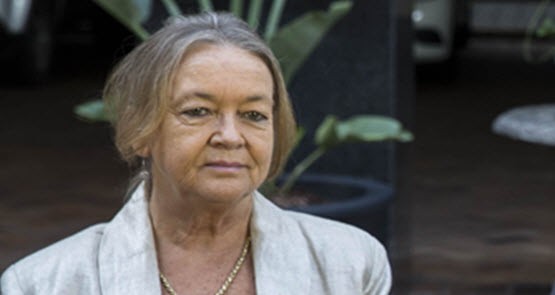 ACT Education Minister Joy Burch has accused The Canberra Times of a lapse of ethical standards after the Fairfax paper yesterday published a photo of a cage — or as Burch tends to call it, an “inappropriate structure” — custom-built at a school to control an autistic 10-year-old earlier this year. But the acting editor of the Canberra Times tells Crikey he stands by his paper: “It’s called journalism”.

The scandal around the cage’s use broke when someone associated with the school complained to the Human Rights Commission about it earlier this year. Yesterday the school principal stood down after the long-awaited conclusion of a departmental investigation into the construction of the now-demolished “inappropriate structure”.

In her release, Burch did not name the media outlet but accused it of going further “in publishing the photo depicting the inappropriate structure itself” (the Canberra Times was the first to publish the image at around noon yesterday).

“It is my understanding that a number of other media outlets have previously had access to these photos but have chosen not to publish them out of respect to the child and family. I am disappointed that one local media outlet has now chosen to so flagrantly disregard the interests of the child and family involved in such a manner.

“I have worked very hard to maintain the privacy and dignity of those involved. I believe the decision to publish this image is a heartbreaking outcome for the family, as well as emotionally damaging for all other parties involved … Publishing this photo does not assist in getting to the truth or add any more insight as to why it was constructed … I call on all responsible media outlets to continue to show respect to the privacy and dignity of those involved in this matter.”

By 5pm, both the ABC and the Daily Mail had published stories online depicting the cage. Publications that did not use the image included Canberra weekly City News.

Crikey this morning asked whether the minister had heard concerns from the school or families involved about the image, or whether anyone had expressed a wish earlier that the image not be made public. A spokesman for Burch said:

“The Minister has been in regular contact with the people involved and formed the view that the publication of this image could be potentially harmful to them.”

The Canberra Times doubled down this morning, republishing the image on its front page with an accompanying article interviewing disability rights activists who sanctioned the use of the image. 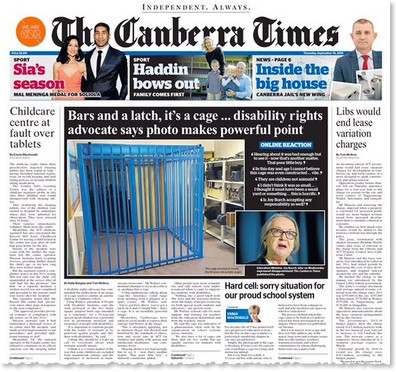 Canberra Times acting editor Grant Newton told Crikey that since the paper had reported the cage’s existence in early April, “we have respected the privacy of the family and the school community involved. We have not named the school or the individuals involved in order to avoid the potential identification of the child”.

He says he rejects Burch’s claim that publishing the image intrudes on the privacy of the family and those involved. “The family and others from the school community knew exactly what the structure looked like,” Newton said. “We make no apologies for pushing hard for the government and education authorities to keep Canberrans properly informed on this matter. It’s called journalism.”

Publishing the image, he adds, has helped clarify important matters about the cage. In April, Burch’s office issued a statement warning media against referring to the “unacceptable withdrawal space” as something able to be locked — she said the department’s investigations had yet to confirm that.

“It was our inquiries that first confirmed the child was kept in a roofed cage while ACT Education Minister Joy Burch was euphemistically calling it an ‘inappropriate withdrawal space’,” Newton said. “At this same time, Ms Burch was lecturing the media against reporting that the cage could be secured, something now confirmed.”

Rundle: Hanson’s autistic kids comments reveal a truth no one wants to talk about

The Manrique children were murdered, and yes we should be critical

Who is this Minister? Doesn’t she understand anything about accountability, let alone journalism? It is she (and her department) who should be ashamed of herself. Good on the Canberra Times and others for exposing this “cage” monstrosity. Of course the picture is a powerful demonstration of the whole sad affair.

This is not a Minister who has shown any understanding of or aptitude for the portfolio of education. One disaster after another.

Her statement here is nonsense. The publication of the picture does not reveal anything about the school – not its name or location. Nor does it reveal the identity of the pupil or his/her family or the school principal. It depicts the structure – that’s it.

I would be good if the MSM could publish a few ‘facts’ about more important issues than this one. Missing in action, mostly, on the significant national and international concerns of the present day.
This is all about sensationalism!

Further, I seem to remember when this story was first in the news, that the reason given for the “fenced area” was to protect the other children in the school/class from being injured by the 10 year old in question. He could be quite violent at times, apparently.
Guess which parents would be the first to complain if their progeny had been attacked??????
There is always two sides to every story. The teacher involved is being made a scapegoat.

(I do not live in the ACT, or have any connection with the people involved)

Trust Crikey to become obsessed with a birdcage which [while not unimportant] is a minor issue compared with the wasteful, educationally ineffective — other than the damage they do to students — ‘progressive’ approaches in our ‘education’ systems.
On the other hand, it would be indefensibly over-optimistic to expect Crikey Cavern Denizens to even begin to comprehend this, wouldn’t it.