No end in sight? The government announced today that it has given the go-ahead to bombing Islamic State targets in Syria, which could start as soon as this week. A tipster tells us that we shouldn’t expect the deployment to be over quickly, according to emails sent to RAAF reservists yesterday:

“Looks like it won’t be a quick in and out bombing raid for Syria. The Abbott government has already committed the RAAF to the long term in the middle East, offering RAAF reservists overseas postings up to the end of 2017. Yesterday RAAF reservists received an email offering them a six-month posting to Iraq or UAE anytime between now and the end of 2017. Said reservists will earn $150k per 6 month stint.”

In April the Prime Minister said that the current deployment to Iraq would be reviewed in 12 months, but its future seems longer than that. We asked Defence whether the emails had been sent and how long it expected Australia to be in the Middle East, but didn’t hear back by deadline.

Into exile. Former national security adviser Margot McCarthy has been sent packing from Prime Minister and Cabinet. McCarthy is a veteran national security public servant with decades of experience in Defence, Intelligence (she was a deputy director of Intelligence in then then-Defence Signals Directorate) who succeeded Duncan Lewis as national security adviser under the Rudd government in 2012. This role was rebadged under the Abbott government, and McCarthy became associate secretary, national security and international policy. Associate secretary is a slightly nebulous position that sits between band 3 senior executive service and the role of secretary. However, McCarthy has now moved out of PM&C altogether and been replaced by her former deputy, Allan McKinnon. She’s recently commenced at Social Services, running Ageing and Aged Care — and at the lower rank of deputy secretary. It’s quite a shift from the centre of power to Tuggeranong, the slightly bleak Canberra town centre where DSS is located, and quite a shift in role for a national security veteran. And a peculiar action for a government that says it is intensely focused on national security. Then again, given her background, perhaps McCarthy was too focused on actual security issues and not enough on hype and stunts.

Bronny’s farewell tour on show. This month Parliament House is showcasing a number of items donated to politicians by foreign dignitaries. Some of them are more mundane, like the gavel Prime Minister Tony Abbott got when he was on Wall Street, but some of them are just plain weird, such as an odd drawing of Abbott, or a portrait of Gillard made out of coffee beans, or a bottle with John Howard’s face on it. We did notice that several of the items, including a large wooden blade, were given to Parliament by Bronwyn Bishop from her ill-fated trip around the world during her time as speaker, including to the Inter-Parliamentary Union in Geneva, where she failed in her bid to become the president of the union.

After losing the speakership, it seems poor Bishop didn’t even get to keep any keepsakes. 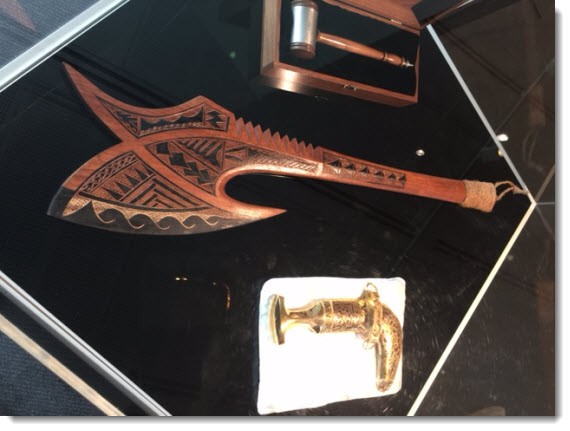 The event kicked off with a speech from Turnbull after he was introduced by Prentice as “the best friend the internet has ever had”. Curiously, neither Turnbull’s speech or Clare’s mentioned the elephant in the room that is the National Broadband Network. Ludlam said the internet needed friends in parliament because the current mob just don’t get it.

We aren’t sure whether Attorney-General George Brandis was invited to be a friend of the internet after all his work in data retention and blocking piracy sites, but we did spy AGD first assistant secretary Anna Harmer — who was responsible for developing and defending much of the AGD’s mandatory data retention policy — keeping a close watch on the event.

You can’t sit with us…. yet. It was with much fanfare that BuzzFeed announced last month it had obtained press gallery accreditation and planned to expand its coverage of federal politics with a dedicated reporter in Canberra in addition to Mark Di Stefano and Alex Lee, who work out of Sydney for the most part. One slight issue is that of finding space in the gallery for the team to report from. Unfortunately for the moment that means Di Stefano has been forced to report this week from the lunchroom. We’re sure it’ll all be sorted out soon enough.

The poll that wasn’t. We have more reports from Canning today, or as our correspondent describes it “journalism’s favourite seat — for six weeks”. Our tipster says he was robo-polled by the Australian Christians three times this week, but the poll doesn’t deliver what is promised. “The ‘poll’ pretends that it is going to ask five questions of me, but after I press 1, 2, or 3 after listening to the same-sex marriage question, it hangs up. There are no other questions; they simply want to inform me that the Greens and Labor want politicians to decide on SSM, whereas the Coalition intend to take the matter to the people. Bless.” He also received a call from Matt, who said he was from “the Andrew Hastie team” but didn’t give his surname, who asked how our tipster felt about the problem with ice in the community.

“I told Matt, who sounded about 16 years of age and fair to middling gormless, that this was a second-order issue. He asked me what I thought was an important issue.

“So I let him have it: I told him unemployment. Youth unemployment in Armadale is about 20% I believe. I told him that this bothered Don Randall so much  that he decided to employ a young person from outside his electorate of Canning to work in his electorate office — namely his daughter. I also told him that Randall had been so concerned about employment generally in Australia that he employed a 457 visa worker, rather than an Australian, in his family’s bakery a couple of years back. Matt just garped. That must be his surname.”

While our tipster may find the attention strange, when the word is that the PM’s job is on the line, we can’t help but stick our noses in.

*Heard anything that might interest Crikey? Send your tips toboss@crikey.com.au or use our guaranteed anonymous form.

BTW Ms Tips, I’m dying to know the full goss on why Bernie Frazer jumped ship. Surely one of your numerous sources can fill in the gaps.

the conservatives don`t give a toss about youth unemployment they will be happy when all jobs are filled by foreign slave labour so they can break the unions and destroy the funding of their political opponents, this is the american way and much loved by abbott and his traitorous crew of mad right wing conservatives