Isentia Index: Syria and IS dominate discussions as the Abbott govt turns two

It was all about Syria and refugees during the past week's media coverage.

As the second birthday of the Abbott government came and went, it was all about the Middle East as the federal government decided to extend military operations to Syria and the refugee crisis dominated global headlines this week, which saw Immigration Minister Peter Dutton and Defence Minister Kevin Andrews — up 25 places this week into ninth — as the major movers, although the PM maintained a dominant lead. Treasurer Joe Hockey dropped four places down to sixth, despite Cabinet leaks suggesting the PM should drop him completely. Assistant Treasurer Josh Frydenberg has stepped up, only two places behind Hockey, with an appearance on Tom Gleeson’s Hard Chat. New South Wales Premier Mike Baird, in fifth place, was on ABC’s Q&A and called out the federal government for its lack of action for the millions of people displaced due to the Islamic State.

Agriculture Minister Barnaby Joyce returns to our top 20 this week after the celebrity court case of Johnny Depp and Amber Heard was heard in Queensland. Heard faces 10 years in jail and a hefty fine after they allegedly failed to declare their dogs to customs officials. Both are in Venice for the film festival and Depp commented that he ate both dogs as per the request of a “sweaty, big-gutted man from Australia”… of course, Depp went on to say that that could describe just about anyone in Parliament. 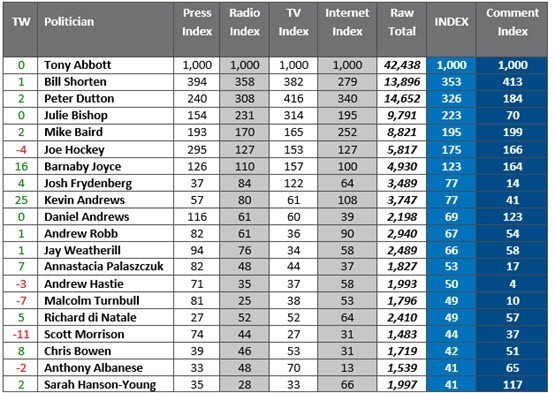 Social media focuses on the PM as #LightTheDark trends across Australia and tens of thousands of people join memorials in all states to support Syrian asylum seekers.