Defining ‘persecuted minorities’ futile in a war that kills all

The Syrian civil war has hundreds of thousands of Sunni Muslims targeted by the Assad regime with chemical weapons, bombing, torture and rape. Yet the government insists others must come first. 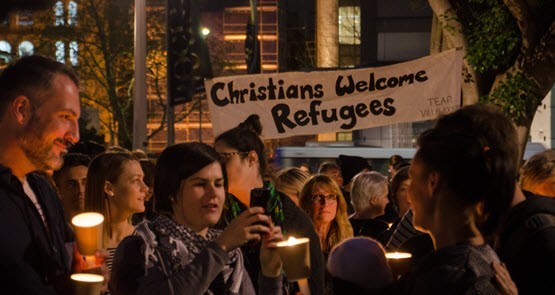 Australia will take 12,000 Syrian refugees in addition to its existing humanitarian intake but will focus its offer on “women, children and families from persecuted minorities” who are currently in Jordan, Lebanon and Turkey, the government has said, as part of a wider announcement that Royal Australian Air Force planes will participate in airstrikes against Islamic State in Syria and an additional $44 million will be provided to the United Nations High Commission on Refugees.

The limitation of help to “persecuted minorities” appears to rule out the approximately 60% of Syrians who are Sunni Muslims and who have been disproportionately targeted by the regime of Bashar al-Assad.

Christians, Yazidis and other religious minorities in Syria have been targeted by Islamic State — but so too have Shiite Muslims, who have been massacred in their hundreds, and probably thousands, by IS across Syria and Iraq (especially the latter). And Kurds, who are predominantly Sunni, are at war with IS across Syria and Iraq (no one has spoken up for atheists, who are also targeted by IS).

But for all its brutality, IS hardly compares to the Assad regime, which, in slaughtering perhaps a quarter of a million of its own people, has disproportionately targeted Sunni Muslims with airstrikes, artillery, chemical weapons, rape and torture.

The targeting of Syria’s Sunni majority by Assad (whose regime is Alawite, a faction of Shia Islam) was a deliberate ploy to turn what commenced as a broad-based uprising against his regime into a sectarian conflict (Human Rights Watch provides evidence for sectarian targeting here, here and here, including evidence that Christians were left alone by regime forces in mixed communities while Sunnis were targeted; the Syrian Network for Human Rights has also described the targeting of Sunnis).

Even before the emergence of Islamic State, enraged Sunnis from other countries were pouring into Syria in response to Assad’s slaughter of his own Sunni citizens. The regime’s tactics included not merely using military force against civilians but rounding up of Sunni men for torture and the rape of Sunni women in prison (for its part, Islamic State encourages rape of non-Sunni women). Assad’s chemical weapons attack in August 2013, which killed several hundred and perhaps over 1000 people, was in Ghouta, a predominantly Sunni town.

Sunni Muslims can no more return to Syria than Christians, atheists or Shiites. If they do, a regime — backed by Russia, Iran and Hezbollah — awaits them with airstrikes, heavy weapons, soldiers and militias.

Asked to describe the “persecuted minorities” the one-off intake would be composed of, Abbott referred to a number of Christian, Jewish and Muslims groups, as well Yazidis and Kurds, but indicated the priority would be those who would be unable to return to Syria, singling out Christians as an example. It also appears that single men will not be permitted as part of the 12,000. One unnamed Coalition MP in discussing Australia’s intake yesterday called for “no more Muslim men”.

The slaughter in Syria doesn’t discriminate, and nor should we. The government deserves credit for helping address what is a global crisis, but the decision is badly tarnished by its reliance on religious discrimination to determine who will benefit from Australia’s offer.

I suspect Abbott is trying to wedge the opposition into supporting a non-discriminatory refugee policy … and thus be seen as supporting Muslims and the “Muslimization” of Australia … Abbott is by nature aggressive and divisive and is always relentlessly looking for a political advantage … and is currently working the national security angle … frantically trying to improve the LNP poll position and hoping to improve the LNP chances in the byelection ..

It’s a difficult thing – deciding who is more deserving or not. Superficially you would think that non-Muslims are targeted more than any other group for the simple fact that they are not Muslims. Whereas we in Aust are more or less tolerant of other religions (at least officially), it is blindingly obvious that in the areas of conflict very little toleration exists for anyone who doesn’t worship the same god as for whoever is holding the gun. Interestingly there have been a few calls that I’ve heard on talk-back radio from (self professed) ex-Syrians in Australia who urge caution on any increased intake. They seem to fear an influx of the very people that they fled from years ago. I’d like to think that anyone coming here can leave their grievances behind for a new life. Maybe that’s being too optimistic.

Mr Abbott said he had not wanted to rush his response and wanted to seek advice from the UNHCR and Australian bureaucrats first.

Translated, he rushed his response because he wanted to see if he could get away with doing nothing. Then even the Premier of NSW got stuck in etc

Mr Abbott said the legal basis for the airstrikes is “the collective self-defence of Iraq”.

Iraq is not formally at war with Syria, the west has not been attacked by Syria, and Syria has not declared war on us; there is no UNSC resolution allowing intervention, even for humanitarian reasons, so the bombing is unlawful in international law. (As was Iraq – same reasons)

Declaring the need to act “with our heads, as well as with our hearts,” Mr Abbott said airstrikes would target Islamic State targets in eastern Syria.

Using his head only to get re-elected with a fear campaign with ISIL as the bogeyman. Not using his head for lawful justification, nor convincing us of any tangible results that might result from a miniscule effort that will likely cause more civilian deaths, and cause more Syrians to flee.

But credit for being pressured to allow 12K to come.

Remember the original reasons for “stopping the boats” … before they landed on “… to stop the drownings”?

Reminds me of a cartoon back in the Stone Age of a NY commuter bemoaning to his companion “Laos! Cambodia! Why can’t we just stay in Vietnam where we belong?”.