Australia to take in 12,000 Syrian refugees, while bombing Syria

Australia has announced it will take in 12,000 Syrian refugees this year. 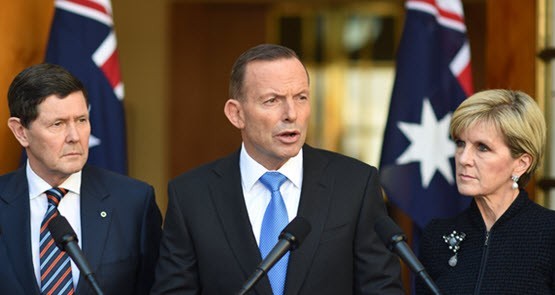 Prime Minister Tony Abbott has announced that Australia will launch airstrikes against Islamic State in Syria and will take in 12,000 refugees from Syria, responding to pressure from the community and his own backbench to address the ongoing humanitarian crisis in the region.

The 12,000 intake will be in addition to Australia’s annual refugee intake of 13,750, with a focus on persecuted minorities, women, children and families from Syria and its surrounding countries of Turkey, Jordan and Lebanon.

“The government will shortly despatch officials to the region to begin working with the UNHCR to identify potential candidates for resettlement. We will move very quickly but everyone who is resettled in Australia will be subject to the usual security, health and character checks. These checks are absolutely necessary. We must play our part in this humanitarian crisis but as PM I must always act in our national interest to promote community safety,” Abbott said.

The government is also increasing funding for the United Nations High Commissioner for Refugees by $44 million, for a total of $230 million. Foreign Minister Julie Bishop said this would bring relief to 240,000 people.

“This additional assistance will be very timely, we can do it immediately. It will provide, as I said, food, equipment, water and cash for these desperate people. The estimates of 240,000 people come from the UNHCR and we are pleased that we can do this with an additional $44 million out of our humanitarian program,” Bishop said.

Within the week, Australia will also extend its air strikes from Iraq to Syria. Abbott said that the focus will be on Islamic State, not the Assad regime.

“I emphasise that our aircraft will be targeting Daesh, not the Assad regime,evil though it is,” he said.

Abbott would not speculate on whether it would lead to boots on the ground, but said that he didn’t have the legal basis to extend the air strikes to Assad targets.

Labor had been calling on the government to take in a minimum of 10,000 refugees from Syria, while Liberal backbencher Ewen Jones suggested 50,000 refugees could be accepted into Australia. Some of his colleagues suggested Christian minorities should be prioritised in any increased intake. Nationals MP George Christensen suggested that the refugees would either “take a job an Australian can do, or go on the dole”.

“I think it’s important that Mr Abbott rein in some of his rogue MPs on the far right who have been saying that somehow taking more refugees in this global tragedy will cost Australian jobs. We just need to stamp out that sort of ridiculous rubbish and call it for what it is,” he said.

Some MPs said Australia was a very generous nation when it comes to taking in refugees, but others said community sentiment had shifted on refugees from Syria.

“The heartbeat of the community is that we should respond,” one Liberal MP said. “It’s not just the ABC or organisations associated with the left that are calling on us to take in more refugees. The very people who stood by us on tough border protection policies are the very people who are now calling us to do more.”

Others were more reserved, however.

“We should never forget most Australians do not want to take in too many refugees,” another MP said. “We should be doing something but not more than what the community expects.”

Others suggested taking in persecuted religious minorities, and those that would “fit in” with Australian culture.

Abbott giveth…and he taketh away.

I wouldn’t be surprised if Abbott gets a short term bounce in the polls from today’s announcements.
He’ll certainly be praying and hoping it carries across to Canning.
The irony is, he’ll probably think it’s due to his “Bomber Harris” impersonation, rather than the “kinder gentler” Tony who cares about “minorities”.

By persecuted minorities, they mean atheists and LGBTI folk, right?

Regardless, this is a good move by the Abbott government.

Disappointed that foreign minister Bishop says that Australian air strikes in Syria would not be directed at civilians but only at terrorists and that there would be minimal civilian casualties. These are more or less the same words uttered by Israel when it bombed and gunned the stuffing out of Gaza just months ago. Those Israeli experts in warfare with far more experience than America or Australia in ME urban infrastructure demolition ONLY targeted terrorists (and tunnels) and yet the vast majority of the 2000+ deaths were civilians. The ‘precision’ aerial bombardment and artillery fell on hospitals, schools and numerous residential buildings because, despite their extensive experience, the bombers were inaccurate or else indiscriminate. The Australian foreign minister is being disingenuous when she tries to reassure us that bombing ISIS will not harm the civilian population of Syria and will not add to the exodus of the people of that unfortunate country.

Christensen is such a slime, and Nicolic is not much better, but the LNP is a natural home for their style of repulsive thinking….the LNP is a badly damaged brand now to be sure, and will take a long time to repair after Abbott is done and dusted.