Wyatt Roy jumps the gun ... Barnaby Joyce takes pity on the accountants ... Swan on the outer? ...

Premature shaping of the narrative: Oops. Wyatt Roy had a (junior?) senior moment this morning and, in his enthusiasm to spruik the benefits of the Australia-India Nuclear Co-operation Agreement, broke an important rule.

Roy chairs Parliament’s Joint Standing Committee on Treaties, which has been considering the agreement that would allow India to buy Australian uranium despite not being a signatory to the Nuclear Non-Proliferation Treaty. Eager to talk up the benefits of flogging our uranium to India, Roy issued a press release just after 9 this morning. “The Joint Standing Committee on Treaties has tabled its report into the Australia — India Nuclear Cooperation Agreement, which could see Australian uranium in dozens of new Indian electricity generating nuclear reactors over the coming decades,” the Queensland youngster enthused.

Only problem was, the report hadn’t been tabled and wasn’t planned to be tabled until lunchtime. Leaking or otherwise revealing reports ahead of tabling is a serious breach of parliamentary practice, although it appears to be becoming increasingly common that reports are being dropped to favoured outlets ahead of tabling. An hour later Roy’s press release was “retracted”. “ A replacement media release will be issued later in the day.” Indeed.

Free the accountants. Last week, Barnaby Joyce called on his colleagues to open their hearts, and our borders, to more Syrian refugees. What prompted the cri de coeur? A fellow accountant.

“As an accountant myself, when you see an accountant walking across the border into Hungary from Syria when his life has been destroyed I feel a sense of empathy for him,” the Agriculture Minister said.

Today the Refugee Action Collective has pointed out that there’s a Syrian accountant currently being held at a detention centre in Sydney who could do with a little of Joyce’s empathy.

“Barnaby Joyce has only got to look to the Villawood detention centre to find a Syrian accountant asylum seeker who has been in detention over two years,” said Ian Rintoul, spokesperson for the RAC. “He spent a year on Manus Island and now a year in Villawood. It is time he was freed from detention.”

If we go by the Joyce rule of empathy, all the accountants, lawyers and trade union hacks should have their asylum claims processed in no time. Everyone else, join the (non-existent) queue.

A new sheriff in town. This morning Bill Shorten announced his new chief of staff, Labor strategist and former ALP Queensland state secretary Cameron Milner. Earlier this year Milner publicly called for former federal treasurer and Lilley MP Wayne Swan to retire at the next election, and last month a tipster told us Milner’s wife, Lauren — who has worked for Swan and is well-known in the electorate and Labor circles — is likely to run as the Labor candidate for Lilley if Swan does step down.

It’s a plum role, and a tipster tells us Swan’s former chief-of-staff Andrew Thomas (who was also the chief-of-staff at ALP HQ during the 2013 election and has been head of government relations for Woolworths since June 2014) was one of the unsuccessful candidates for the job. Is the tide turning against Swanny and his part in the Gillard and Rudd governments as the party gears up for for the next election?

Canning letters. The Canning byelection is less than two weeks away, and after a flurry of activity over the weekend, news from out west has slowed down a little. Luckily for us, our Canning-based tipsters have sent us the two major candidates’ campaign brochures. Labor candidate Matt Keogh’s letter comes with the requisite brochure and reply-paid envelope encouraging people to fill it out for postal votes. It offers a phone number “for more information on postal voting, or for help completing this form” — the number goes to Keogh’s office. At least it includes a Labor logo so you know where it comes from. 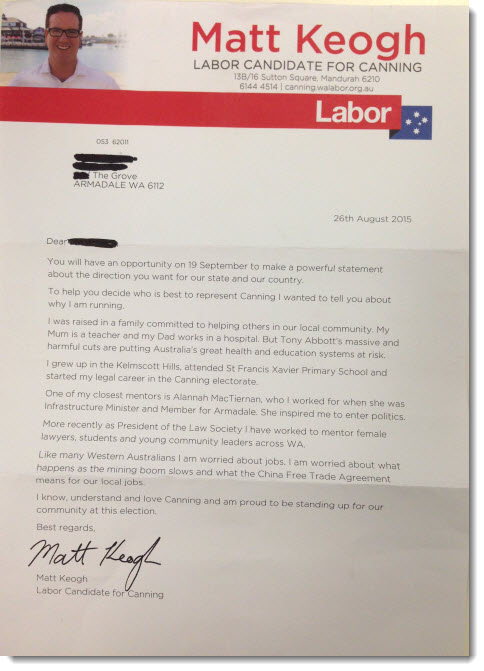 Keogh’s pitch to voters uses his parents — a teacher and a hospital employee — to lead into an attack on Prime Minister Tony Abbott, and name-drops the popular Alannah McTiernan as “one of my closest mentors”. He also emphasises his feminist credentials “more recently as President of the Law Society I have worked to mentor female lawyers, students and young community leaders across WA”.

Andrew Hastie, the Liberal candidate, has gone glossy. He mentions his army service prominently and points to tackling problems with the drug ice as one of his top priorities: “I’ve started working on a co-ordinated approach to this problem with the assistance and support of locals, together with Julie Bishop and Federal Justice Minister, Michael Keenan.”

The brochure features happy snaps of Hastie’s family and also reveals that Hastie and his wife are renting in Mandurah while they save to buy their first house — we suggest he should get a good job in order to afford property in this market. His how-to-vote card directs preferences to the Australian Christians, the Family First Party and the Australian Defence Veterans Party. Labor isn’t preferenced last — that spot is reserved for controversial independent candidate Teresa Van Lieshout, a previous Palmer United Party candidate who says she wants to abolish fines, teach the New Testament in schools and has labelled the government “fucking criminals”. 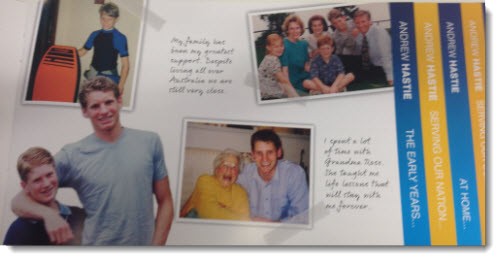 AGNSW removing asbestos. A tipster at the Art Gallery of New South Wales has followed up last week’s tip about staff being moved to the State Library of NSW while expensive refurbishments are taking place:

“A secretive asbestos clean-up is underway at the Art Gallery of NSW at the same time as a suite of executive offices on the top floor are being expensively renovated. This is not the first time the gallery has undertaken an asbestos extraction process. Thirty years ago contractors removed the cancer-causing material from light fittings above the library and the conservation and curatorial offices. Staff were shepherded temporarily to another part of the building while the work was conducted and before the public gallery was declared an “asbestos-free” zone. Now asbestos removalists are tackling the administrative area and some staff have been told they will be relocated to the nearby NSW State Library in 2016 as work is carried out. It’s added to disquiet among staff about pending redundancies, denied last week by director Dr Michael Brand in a statement to Daily Telegraph journalist Elizabeth Fortescue despite the fact that applications for voluntary termination packages are already known to be in the pipeline.”

We asked the gallery if asbestos was being removed and if staff had been notified, and received the following response:

“Like many other prominent state institutions, the Gallery has been undertaking a building upgrade program over the past 18 months with our entire staff fully briefed on the refurbishment process throughout this time.

“The building upgrade program includes an upgrade to air conditioning systems, offices, electrical and lighting systems and removal of stable asbestos residues by an expert occupational hygiene consultant with previous experience removing asbestos at the Sydney Opera House, Reserve Bank Of Australia and the Law Courts in Sydney.

“The removal of asbestos residues does not pose any health risk and is not located in areas accessible to visitors or general staff.  The process is being managed in accordance with the requirements of the Work Health & Safety Act 2011 by an expert occupational hygiene consultant with no impact on general staff or visitors.

“Gallery staff moving off site to the State Library next year will allow the Gallery to upgrade general office space, sustain public access to exhibition spaces and is cost effective.  The move will also provide an additional benefit of working more collegiately with our friends and colleagues at the State Library.

“A program of asbestos removal was conducted at the Gallery in 1979 when the Captain Cook Wing was constructed.  It is our aim to remove any remaining asbestos residues from the Gallery and this process is made possible through the financial assistance of the State Government.”

Thank your lucky subs. Today is Ms Tips’ subeditor’s birthday, so we must pay tribute to her second-to-none ability to pick up typos and sentences without verbs. Unfortunately Fairfax does not seem to have subs of the same calibre — or maybe there are not enough to go around. This typo went to print in the early editions of today’s Age, in a headline on the write-up of Bart Cummings’ funeral. Ms Tips first read it as “trainer who deified the odds” — which could almost have worked for Cummings. It’s been changed in later editions to “trainer who defied the odds”. 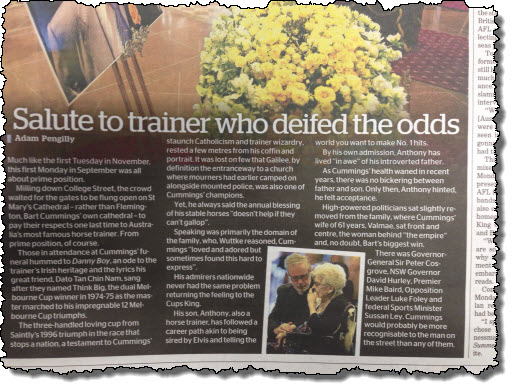 In other troubles for Fairfax subs, The Border Mail got a bit ahead of itself today, publishing the correct date, but listing Wednesday instead of Tuesday as the day. Readers in Albury-Wodonga might have thought they were one day closer to the weekend, but alas it wasn’t to be. Perhaps mistakes like that could have been avoided if Fairfax valued regional journalism, subbing or the community. 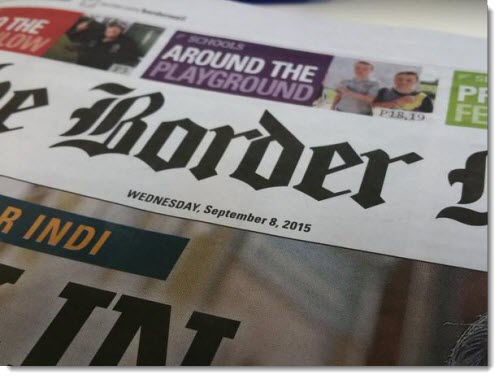 The quality of Fairfax papers is sadly in decline, so these things are no surprise. I read ‘The Age’ each day via the app – it is padded out with stories from Sydney, although this is never actually stated – this week there was a story about something in Kambah – still not sure where that is and recently, the story of the Deputy Mayor of Auburn – as Auburn is also a Melbourne suburb, this was a bit confusing…..then there are the endless columnists waffling on about rugby etc. *sigh*

Crikey talking about the quality of OTHER Capitalist Media entities would be satire if they could see it, but since they can’t it’s merely irony.

“when you see an accountant walking across the border into Hungary from Syria”….That would be a mighty long stride. Barnaby obviously needs to polish his geography as well as his well hidden compassion.