Debris found on La Reunion island has been determined to have come from MH370, but we still don't know where and why the jet went down. 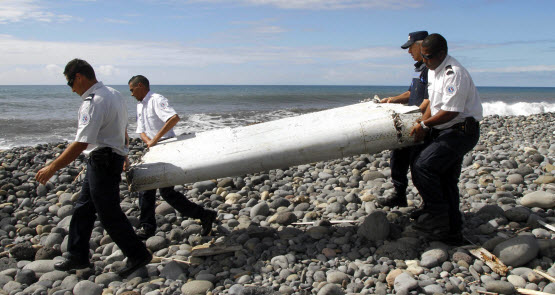 The public prosecutor’s office in Paris has issued a statement confirming  that the wing part of a Boeing 777 that was recovered from the shores of French island La Reunion on July 29 comes from Malaysia Airlines flight MH370, missing since March 8 last year.

Investigators had been examining the flaperon, part of the trailing edge of the wing of the jet, in a military research laboratory near Toulouse since early August, and had declined to confirm it was from the flight, which disappeared with 239 people on board on its way from Kuala Lumpur to Beijing, until any possibility that it was an identical part discarded by another 777 operator had been eliminated.

The Paris prosecutor’s office said in a statement Thursday that investigators used maintenance records to match a serial number found on the wing part with the missing Boeing.

“Today it is possible to state with certainty that the flaperon discovered on Reunion July 29, 2015 corresponds to that of flight MH370,” the prosecutor’s statement said.

Which of course leaves the cause of the flight’s disappearance and the location of the heavy wreckage unresolved.

The Malaysia-directed and Australia-managed search in the south Indian Ocean has so far proved unsuccessful, although very early in the saga there were satellite and aerial sightings of surface debris that might just have been from MH370.

As conditions improve with the end of winter sea conditions in the priority search area Australia intends to use more sophisticated, synthetic-aperture sonar and a large automated underwater vehicle resembling a large fat torpedo to check out “holes” and “shadows” in already searched locations where the wreckage might have evaded detection.

It will also continue to scan an expanded search zone, reaching out to a maximum extent of 120,000 square kilometres, compared to an initial area half that size, which, despite uncertainties in satellite data and flight assumptions, is believed to contain the most likely locations for the sunk wreckage.

The confirmation that the flaperon is from MH370 is unlikely to end speculation that the jet crashed in the sea close to its point of departure, or in Vietnam, China, or other parts of the vast Indian Ocean.

Those speculations are difficult if not impossible to reconcile with signals from MH370 that indicate it flew for seven hours, 39 minutes after liftoff and made its final, incomplete contact via satellite over the western Indian Ocean.

However there are numerous and contentious issues involving the assumptions relied upon by the search directors, and also recognised in part by them, which might lead to further changes in or near the priority search areas.

MH370′s disappearance remains the greatest, and most contentious and frustrating of aviation mysteries.

You reef what you sow