Kate Torney on why the ABC needs to change

ABC news director Kate Torney is leaving the public broadcaster to become CEO of the State Library of Victoria. She reflects on a very turbulent tenure. 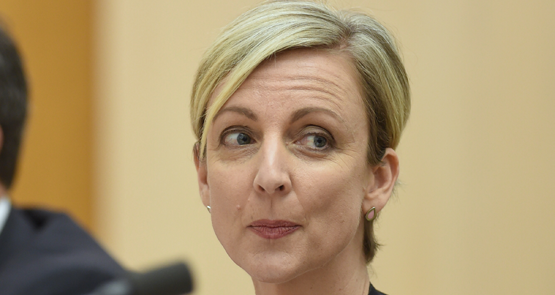 Torney told Crikey the debate helped show her the ABC needed to do more work. Not just to put its content online, but to show the most high-quality, in-depth journalism the ABC does can exist online as well as it does on television. She says there was a stigma that ABC online was a lesser, cheaper alternative to something like Four Corners.

“I thought the debate surrounding the Walkleys, and the digital and current affairs teams, was really, really good,” she said. “Sarah [Ferguson] identified the need to ensure we are hanging onto the kind of journalism that has been so critical to the ABC, and globally, that investigative journalism, that depth and breadth of coverage that we’ve done so well and developed a culture of. That for me was a moment of realising we really need to do more work.

“No one has conquered long-form journalism on digital yet. We need to. We need to understand what Four Corners will look like in five or 10 years’ time. Sure, there’s still strong audiences for it on TV. But we need to make sure that in five, 10, 15 years, that brand is as important as it is now and as it always has been.”

“Sarah and I have talked about this a lot. I have a 17-year-old who doesn’t watch Four Corners, but who really engages with the ABC’s digital offering. The challenge, and enormous opportunity, around current affairs is to access and reach audiences who might never have otherwise come to our content.”

Talk of the future seems inescapable with Torney. The first female director of news at the ABC, she occupies a powerful position, which she has used to constantly hammer home the imperative for the ABC to change with the times. Torney will leave the ABC at the end of this week after two decades with the organisation, and six years as the director of news. And there have certainly been a lot of change in her tenure.

ABC News Breakfast, the ABC’s first foray into rolling live news, launched just before Torney became news director in 2008. A few months later in 2010, News 24 launched, taking the live news concept to its ultimate conclusion. The Drum, which moved the ABC into online opinion and analysis writing, launched a few months after that. The national reporting team, the ABC’s dedicated cross-platform investigative unit, launched in 2013. The changes, Torney says, began under her predecessor John Cameron, but she says she’s she’s proud that in her time, the ABC has continued to deliver new innovations while also maintaining high-class, top-of-field productions like the recent documentary The Killing Season, which focused on the tumult of the Rudd-Gillard years.

Much of this change has been painful, and Torney’s direction has its critics within the organisation, some of whom say she and other members of the management team have pushed through an agenda with insufficient regard for how it would affect the ABC’s staff. Torney has also presided over several redundancy rounds, during which the ABC’s digital teams actually added staff while other parts of the news team shed them. Before becoming news director, Torney used to head up the Asia Pacific News Center in Melbourne, and before that, the Australia Network. But under her tenure, the Asia Pacific News Centre has been gutted, and the Australia Network is no more, courtesy of budget cuts and a decision by DFAT to axe the Australia Network’s contract.

“It’s always difficult,” Torney said, when asked about what it was like to cut into teams she used to (directly) lead. “You would prefer to never have to do that. But we’re also an accountable organisation. We’re very focused on ensuring that we spend the budget we are allocated wisely.

“Last year was a very, very difficult year. We saw the loss of extraordinary specialist talent at the Asia Pacific News Centre. People who’d worked in covering that region for a long, long time. It wasn’t just a loss to us, but a great loss to Australian journalism. But we need to make sure we’re operating within budget.”

The ABC, she adds, is a resilient organisation, staffed by a “very resilient group of people”.

That resilience has surely been tested over the past two years, courtesy of the government’s frequent attacks on the public broadcaster. But Torney won’t be drawn on that, saying only that as a public broadcaster, it’s important for the ABC to be accountable. Asked whether, as former prime minister Julia Gillard claimed in a new chapter to her autobiography, the Abbott government’s attacks on the ABC have resulted in the organisation “pulling its punches” with its coverage, Torney says she has seen no evidence of that. “You can’t underestimate our commitment to independence,” she said. “There’s a pretty healthy culture at the ABC of reporting without fear or favour. I certainly haven’t felt that over the period of time I’ve been here — 20 years of governments of different colours.”

Next week, Torney will take on a new role as CEO of the State Library of Victoria. Although she was seen by many, including Communications Minister Malcolm Turnbull, as a potential successor to managing director Mark Scott when his term expires next year, Torney says she isn’t interested in the role.

“The State Library is absolutely outside my comfort zone,” she said. “[But] there are so many similar challenges to what was the case at the ABC. So many opportunities to redefine what a library is in a modern environment, to see what services will ensure libraries remain really valuable in the future.”

The decision to step outside the ABC, she says, was made early this year. “I really felt like the sense of change, and of embracing change, was in place,” she said. “We’d developed a good culture, [where] people were looking for opportunities to embrace what was next.”

Torney thought she should do the same.

I am in my 70s and live outside Australia. I am very grateful that I can watch the ABC’s longer tv programs, such as Insiders, Four Corners, QandA, shorter ones such as One plus One and special series such as The Killing Season, via the internet (iView is not accessible here).

I am still able to hold an idea in my head for an hour or more and I appreciate programs that are not reductionist and do provide the full picture and provoke thought.

The world is complex and increasingly so. Not everything can be reduced to 120 letters or an A4 page.

What I thought of Australia Network by the time of its demise cannot be written here as it would be censored for its expletives. Suffice it to say I found its loss less painful than its presence.

No doubt Torney was capable. But like the rest of she had her blind spots.

ABC News Breakfast, the ABC’s first foray into rolling live news. What is the difference between it and channels 7 and 9 morning chatty programs? NOTHING, its just mostly mindless crap and babble with a bit of news thrown in here and there.

This is a chance to complain about the 7.30 news and how it has half abandoned significance in favour of human interest stories. We get significance on The Drum so it is not a concept lost to the ABC consciousness. That is to say, its absence on the 7.30 news seems not to be the result of absent-mindedness. Let us hope that Kate Torney’s successor can undo this descent into trivia. We are well served with trivia elsewhere.

Those wanting a serious analysis of why the ABC/SBS needs to change need to find a somewhat more intellectually rigorous entity than Crikey, don’t they.

While one is pleased to have programs such as Four Corners I agree with MJM that the
ABC has its blind spots. On really major issues it can be relied upon to toe the corporate group think. When did you last see/hear a serious discussion on issues as diverse as the assassination of JFK, 9/11 or Ukraine that didn’t just reflect the long discredited official versions. The huge developments taking place as part of Mr Xi’s New Silk Roads are entirely absent from the ABC, yet they have more long term implications for Australia than any other current development. One looks to the alternative media like Crikey to fill those gaps, but sadly they are mostly found wanting as well.